The Magheramorne Quarry might just be an old Lafarge Tarmac cement quarry with a nice view of the Irish Sea in the real world. But in HBO’s massively popular “Game of Thrones” fantasy television series, it’s “The Wall” and it’s all that stands between Westeros and the dangers in the north.

The old quarry has been turned into the set for scenes in the show that take place at Castle Black where Jon Snow and the Night’s Watch protect the seven kingdoms with the help of a 700-foot wall built with ice and magic. It’s basically all CGI when it hits the small screen, but local lawmakers hope the quarry set can become a permanent tourist attraction long after it’s been decided who will sit on the Iron Throne.

According to the Belfast Telegraph, councilors in County Atrium in Northern Ireland are hoping HBO leaves the set behind once the show based on George R.R. Martin’s “A Song of Ice and Fire” series wraps. Millions upon millions of people watch “Game of Thrones” each week, and it’s the type of show that keeps the work water cooler crowded each Monday after a new episode.

The local lawmakers think that kind of fandom would translate to plenty of folks making a real pilgrimage to where the fake wall once stood—albeit through computer animations.

“It is a magnificent site and it would be a massive tourist attraction. The number of buses and people who stop to try and get views of it,” East Antrim DUP MP Sammy Wilson said.

Local councillor Robert Logan also has seen how the quarry is already a popular spot for tourist to sneak away to view from afar, adding “it does create quite a bit of interest.”

Wilson has visited Magheramorne Quarry himself to watch filming and said there are already are working on plans to develop the old quarry into a recreational site of some kind. Wilson said keeping Castle Black “would be the icing on the cake.” 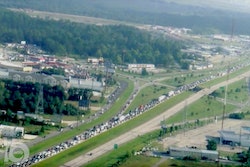