The National Work Zone Memorial, the traveling tribute to those who lost their lives in work zones, made three stops in Pennsylvania last week.

“Having the National Work Zone Memorial stop in Harrisburg, Philadelphia and Pittsburgh is a great honor, but also very sobering because you can see the people who have lost their lives during work to improve our transportation system” said Pennsylvania Department of Transportation (PennDOT) Secretary Leslie Richards.

“As drivers we must realize that work on our roadways is essential to keep people and commerce flowing, and as residents of the state it is our responsibility to obey work zone laws to keep these workers safe from harm.”

At the Harrisburg event, PennDOT also showed its traveling worker’s memorial at the Keystone Building, which displays 85 posts with safety vests and hard hats. The posts represent the number of PennDOT employees who have died “in the line of duty” over the past 45 years.

“Too many construction workers have been sent to the hospital in recent months and too many Pennsylvania Turnpike employees killed over the years by speed and distraction in work zones,” said turnpike CEO Mark Compton. “These men and women are the unsung heroes of our highways; it is appropriate and imperative to memorialize those who had been killed on the job.”

The National Work Zone Memorial is updated each year and travels across the country throughout the year to raise public awareness of work zone safety needs. More information on the memorial, and the ATSSA’s “Respect and Remembrance: Reflections of Life on the Road” program, are available at www.attssa.com/TheFoundation. 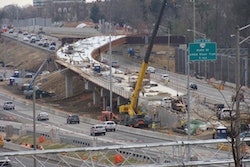 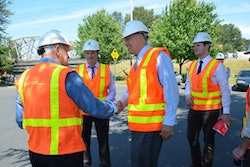