End users of reclaimed asphalt pavement (RAP) and recycled asphalt shingles (RAS) in asphalt mixes – both contractors and government agencies – are benefiting from the lower raw material prices that the bituminous and mineral reclaimed products bring to the table. Those components – which are 100 percent recyclable – replace virgin materials used in asphalt mixes, whether hot, warm or cold.

And while use of RAP now requires processing, testing and separate stockpiling to a degree not done when it first came to market – adding costs for the asphalt producer – the enhanced control over RAP’s composition means it can be used reliably in larger amounts in mixes with predictable results.

It wasn’t always this way. Beginning in 1970s, when extensive use of RAP came into use, skyrocketing crude oil prices first drove acceptance of RAP as a way to lower the per-ton cost of hot mix asphalt.

At that time, the price of hot mix asphalt soared during the Arab oil embargo, while sophisticated cold milling equipment came on the market. The aggregates contained within the new flow of RAP were permitted, shot, crushed, screened, tested and transported, saving the ultimate user enormous amounts of money in the cost of virgin aggregates.

Also, up to that point, demolition RAP from construction projects had been landfilled, incurring tipping costs and using up landfill space better suited for refuse; now RAP could be reused as an industrial waste material.

“Over the years, contractors generally stuck with having one stockpile of recycled material and feeding anywhere from 10 to 25 percent RAP into the mix,” says the Asphalt Pavement Association of Michigan in an analysis. “This produced significant cost savings, and the industry was content to remain at this level of recycling.”

But there was an added bonus to RAP used as virgin aggregate replacement: the RAP also contained a residual amount of asphalt enveloping the aggregate particles.

A controversy then followed over whether RAP was just a “black rock,” or whether there was value locked into that bituminous coating. The characteristics of this residual asphalt were studied and quantified, and soon RAP was assigned a value. That included the degree to which the residual asphalt allowed a reduction of liquid binder added to an asphalt mix.

However, the quantification of residual binder now required that RAP be tested, and asphalt producers got into the game of processing RAP into consistent sizes and testing those gradations for asphalt content. Gone are the days of RAP as just a recycled aggregate; now, RAP producers create separate stockpiles containing particular particle sizes, and blend the RAP in stockpiles to ensure a consistency that can be dialed into an asphalt mix design.

As RAP use increased, reclaimed asphalt shingles (RAS) were also found to be beneficial. Like RAP, RAS contains asphalt and mineral components – with the added benefit of fibers – that can be used in pavement mixes.

But the native asphalt in RAS is a much stiffer variety: the asphalt is “air blown,” or purposely oxidized to increase its softening point and decrease its penetration. This is done to keep the asphalt stiff and solid on a hot roof. That may be good for roofing materials, but it is much stiffer than liquid asphalt binder and has to be accounted for in the design when RAS is added to an asphalt mix.

While an asphalt producer or contractor may receive, store and process RAP in his yard using crushing and screening equipment in-house and thus saving money, RAS nearly always is processed by an independent supplier. This supplier reduces the shingles to a small gradation that will react more efficiently in a mix.

The supplier certifies that the material meets state specs and also sorts, grinds and tests the RAS to make sure it does not contain asbestos, wood scraps or metal and is kept separate from pre-consumer (manufacturer waste) shingles.=

That these recycled materials have great value is beyond question. The 4th Annual Asphalt Pavement Industry Survey, released October 2014 by the National Asphalt Pavement Association and sponsored by the Federal Highway Administration, shows significant growth in the use of RAP, RAS and warm mix asphalt technologies from 2009 through 2013.

“The asphalt industry remains the country’s number one recycler by recycling asphalt pavements at a rate of over 99 percent, and for the first time all (100 percent) contractors/branches report using RAP in 2013,” the survey says. The average percentage of RAP used in asphalt mixtures has increased from 16.2 percent in 2009 to 20.0 percent in 2013, and that year the estimated RAP tonnage used in asphalt mixes was 67.8 million tons.

“Assuming 5 percent liquid asphalt in RAP, this represents over 3.4 million tons (19 million barrels) of asphalt binder conserved during 2013,” the report says. “The estimated savings at $600 per ton for asphalt binder is $2.04 billion.”

Use of both manufacturers’ scrap and post-consumer asphalt shingles used in asphalt mixes increased 135 percent since 2009 to more than 1.6 million tons in 2013, according to the survey. “Assuming a conservative asphalt content of 20 percent for the RAS, this represents about 320,000 tons (1.7 million barrels) of asphalt binder conserved,” NAPA reports. “The estimated savings at $600 per ton for asphalt binder is $192 million.”

The Asphalt Institute (AI) is on record saying the components of RAP have value – particularly true of the asphalt binder – and that the residual asphalt can reduce the amount of new asphalt binder in a mixture. A mix with 20 percent RAP bearing five percent asphalt content can result in a one percent savings in new asphalt binder, AI says.

Moreover, there are intangible benefits to use of RAP and RAS in pavements. A variety of “green” calculators are available that will help agencies and engineers determine the degree of environmental sustainability a road project will have.

These externalities don’t figure into the per-ton cost of asphalt containing RAP or RAS, but they are important as government agencies figure the environmental impact of road construction into the total package. A project’s content of recycled materials – and future recyclability in reconstruction – may figure in the choice of whether an agency specifies asphalt or portland cement concrete pavements.

A life-cycle assessment (LCA) quantifies the impact of a road project on the environment by assessing products such as energy consumed or carbon emitted. In 2012, the National Center for Asphalt Technology (NCAT) Pavement Test Track constructed the “Green Group” experiment, which was designed to reduce not only the life-cycle cost of a pavement structure, but also the impact of the pavement on its LCA. Recycled materials like RAP, ground tire rubber, and RAS in conjunction with warm mix asphalt were tested.

At NCAT, LCA software was used to analyze on these materials and the construction phases of four newly constructed test sections, and compare them to a virgin asphalt mixture produced hot.

Thus mixes containing both RAP and RAS have become permanent components of environmentally sustainable road construction, and RAP is used extensively as a base material as well.

The sizing of RAP will help to refine its use in HMA, says the Asphalt Pavement Association of Michigan. “Having two or even three different size stockpiles of recycled material means greater flexibility in designing mixes for specific applications.”

For instance, in finer surface mixes, an increased amount of fine RAP can be employed, whereas a greater fraction of coarse sized RAP can be used in large stone mixes. “Like any other material in HMA, RAP should be engineered into the mix, not simply dumped,” it says in an analysis.

Understanding the asphalt content and gradation will help the mix designer integrate the recycled material in the right proportion and adjust the virgin materials. “If used in large quantities, it may be advisable to extract and test the binder to see if it is highly oxidized and brittle,” APA-Michigan says. “If it is, then the virgin asphalt may be decreased by one grade to ensure that the resulting mix is not brittle.”

That is, if a mix using all virgin materials has a required binder content of 5.5 percent, then a 30 percent RAP mix, where the RAP contains 4 percent asphalt, will reduce the amount of liquid binder by 1.2 percent. This means you could reduce the quantity of liquid asphalt by 22 percent.

The payoff: “On 10,000 tons of HMA, this means a reduction of 120 tons of liquid [asphalt cement]. At $250/ton, this works out to a savings of $30,000,” APA-Michigan says, adding “the savings with RAP go beyond just the savings on liquid asphalt; the aggregate in RAP provides just as much, if not more, money in your pocket.”

High RAP content mixes may pose special problems in terms of workability and compactability. While this may be aided somewhat by the use of a reduced PG grade of virgin binder, modifiers that improve workability at high temperatures may be indicated.

A northeast-Ohio asphalt producer is optimizing its use of RAP by processing it into consistent sizes, which are stockpiled and used as needed in commercial and DOT mixes.

Tri-County Asphalt Materials, Youngstown, Ohio, operates a 160,000-ton-per-year batch plant, from which it serves predominantly commercial customers with a variety of mixes on demand, a la carte.

“We use this plant to make different mixes for our customers throughout the day,” said Chuck Royer, plant manager. “We run recycled asphalt 20 percent in base, and 15 percent surface courses, and otherwise use limestone from a quarry 20 miles south.”

Consistency of RAP feed is paramount for mix production, Royer said. “It’s very important, especially with state work,” he said. “We have to make sure what they’re getting in the mix is what’s called for in the mix design. In order for us to do Ohio DOT work we have to make blended piles. Because the material comes from so many sources, our impact crusher helps us process large amounts of RAP while still knowing the gradation and AC content via test samples. With this machine we have a lot more consistency than we did prior.”

To upgrade RAP production, Tri-County acquired a mobile impact crusher that replaced a rented crusher/screen and a small in-line crusher mounted in the recycle system. “We had problems with that small crusher,” Royer said. “It was wearing out and would plug up on us. We did a lot of maintenance on it.”

In addition to that small in-line RAP pugmill, Tri-County had the rented crusher/screen brought in to pre-crush RAP in advance of that in-line crusher. “We’d rent a crusher/screen to process RAP, but we’d still have to run RAP through the in-line crusher,” Royer said. “That was an added cost.”

“The impactor saves us a lot of labor,” said Rick Vernal, president, Tri-County Asphalt Materials. “Now, we have one guy feeding one piece of equipment, and the same guy pulling out a finished product. We’re only handling the product once. That compares to before, where we’d have two to three guys. They’d run RAP through the rented crusher, then through the screen, then through the crusher and back through a final screen. It was a lot more work.”

The new impactor gives more flexibility in feed sizes, Royer said. “It lets us accept blacktop driveway tear-outs of all sizes,” he said. “In the past we were limited to 6-inch-diameter down. The in-line crusher was good only up to 20 tons per hour, and when material was damp it would tend to plug up. Rubber or crack sealants in the feed also would bind it up,” Royer said. 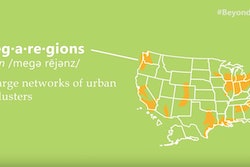 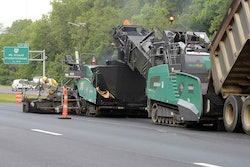 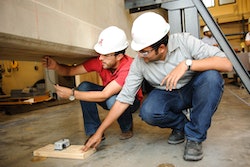