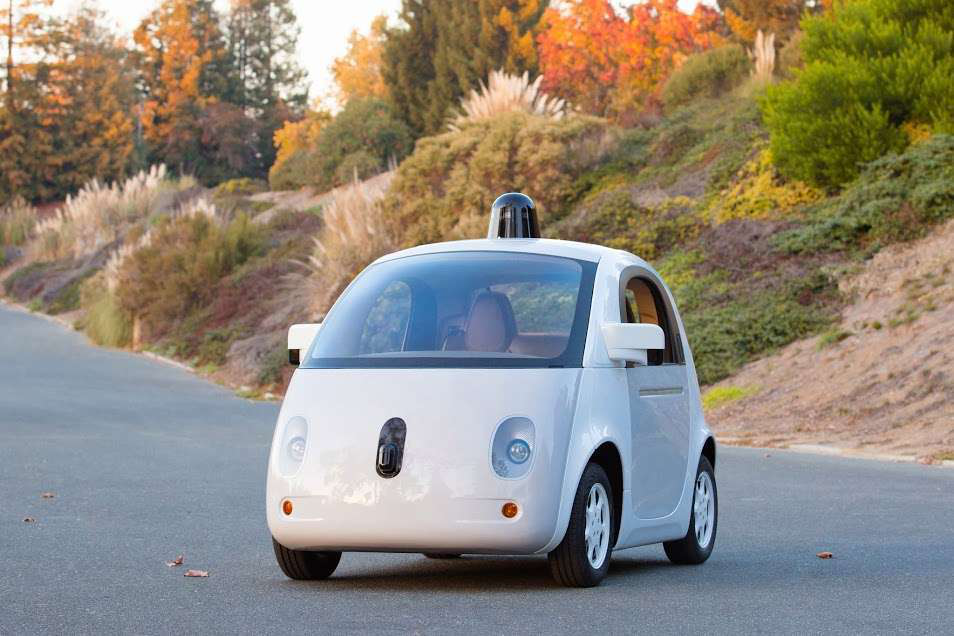 Laugh at Google’s diminutive self-driving car prototype all you want. But don’t let its size fool you—it has massive implications on the future of all vehicles.

Every now and then someone will say to me, “What’s the deal? Do you want to be an automotive journalist?”

Well—I already am an automotive journalist, thank you very much. I love my job. And I love trucking. (That said, if Car and Driver calls looking for someone to go drive Ferraris through the Italian Alps then—no offense—I will see you suckers LATER!)

The reason I devote attention on Twitter to appropriate automotive news is because commercial trucks and the consumer car world are intertwined like DNA double-helix strands and have been for decades. And, as with DNA in genetics, if something shows up in the automotive world, it’s only a matter of time before a slightly altered version of that technology shows up in work trucks, too.

But there’s more going on than simple shared technology today. If you read the tea leaves correctly, there is a seismic shift about to happen in transportation. It will begin on the automotive side. But rest assured, its shock waves will hit trucking—and sooner, rather than later.

A few days ago I ran across a photo on my Twitter feed with a quote attributed to Henry Ford: “If I had asked people what they wanted, they would have told me, ‘Faster horses.’”

It’s a good quote. And although no one seems to be able to directly credit it to Ford, it’s clearly the way he thought about the world and his potential customer base.

But the more I thought about that comment, the more it occurred to me that in many ways, the entrenched thoughts and worldviews Ford and other early automakers had to overcome at the turn of the 20th Century are with us again today.

When you open up a very early print edition of sister publication CCJ (printed since 1911), a good portion of the copy is spent defending new automotive technology and pointing out the many, many problems with horse-drawn transportation.

In every early issue, there are pictures of dead horses lashed to wagons in city streets and a constant drumbeat theme: Yes, this new automobile technology isn’t perfect yet, and it has lots of problems. But it is getting better all the time and it is the wave of the future. You need to get on board now or get left behind.

Go to any trucking industry meeting today and listen to the dialogue there. Sooner or later, somebody is going to start grumbling about technology. A lot of people don’t like changing tech. They really don’t like it when they feel that technology is being forced on them. And they don’t like paying for it when they’re not so sure they need it.

So you hear lots of complaints about e-logs, exhaust treatment systems, electronic control modules and a whole host of other systems.

And let me be clear here—I’m not suggesting for one moment that problems with many of those don’t exist and will have to be worked through.

But I have some shocking news for you: The changes fleet managers today are dealing with are nothing compared to the challenges they’ll be facing soon—very, very soon, in fact.

Why do I think that? Let’s go back to the automotive industry and see what’s happening there.

The most interesting thing in the automotive industry today are the highly visible clues that totally new players are about to enter that market in a big way. I’m talking of course about Google and Apple, which are rumored to be working on new automotive products. And then you’ve got a technological juggernaut like Tesla, which is looking to totally change the way cars, and now houses, are powered. And let’s not forget about Amazon, which is looking for completely new, hyper-efficient ways to get packages to consumers.

Given the fact that the major automotive manufacturers have had a virtual death grip on this industry and its technology for more than a century this is massive news. And the immediate question is obvious: Why are dedicated technology companies like Google and Apple suddenly interesting in automobiles?

The answer is, I think, three-fold:

1. They perceive a lack of innovation and feel they can exploit that technology gap with new products that will appeal to their customers.

Let’s face it, for decades, The Big Three automotive manufacturers were THE global technology and thought leaders. When people wondered what their lives would be like in 10 or 20 years, they looked to GM, Ford or Chrysler to paint that picture for them. Today, thanks to firmly entrenched bureaucracies, decades of crippling non-R&D business costs like pensions and healthcare, as well as corporate mindsets that value conservative designs over innovation, automotive manufacturers have lost that edge.

An automotive manufacturer today makes a big deal about a new car model being equipped with its very own Wi-Fi network and you can picture a tech company like Google patting it on the head and saying, “Aw! Isn’t that cute!” Because companies like Google and Apple see traditional car makers as ossified and increasingly out of touch. Even worse, many of their customers—particularly young people—feel the same way.

2. Tech companies like Apple and Google understand far better the rapidly changing consumer concept of what cars and transportation should be today.

The automotive industry’s concept of developing, marketing and selling cars was solidified in the 1950s and hasn’t changed much to this day.

But the reality of a family of four with a stay-home mom and two cars in the garage hasn’t really existed in this country for a couple of decades now. And yet that’s the scene in virtually every car commercial you see on TV today.

Tech companies understand that young people today have very different concepts of what transportation should be and how it should work. In that world, even the very idea of outright car ownership is questionable.

Maybe you just rent a car. Maybe you and a group of people own a car collectively and you all schedule its use via the Internet. Maybe that car drives itself to the supermarket and picks up an order of groceries you ordered online, then drives itself to your house to drop them off before going over to your friends’ house to transport them out for a dinner date.

And maybe that car is electric and runs off of power collected from a solar grid. There are a lot of “maybes” there. And who knows if they’ll come to pass. But if they do, it will because companies like Apple, Google and Tesla are trying to figure out how to make those ideas come alive. And those lines of thinking are anathema to the big car manufacturers.

And this is where the massive, eventual impact on trucking comes into play. Tech companies understand better than anybody else the world-altering potential for the systems they’re working.

And they look at our existing transportation technology and the ways we move both people and products and see a landscape as antiquated as the one CCJ’s first editors gazed upon when they saw a horse-drawn beer wagon plodding down a city street.

The tech companies understand that transportation is absolutely vital to our future economic and technological growth as well as the continued increase in our collective standard of living. They not only want into the transportation industry, they want to change it radically. Because they believe they can make a lot of money transforming and serving an industry that they see as woefully out of date.

Laugh all you want at Amazon’s recently-announced drone delivery project; for what’s it’s worth, I think the idea of hordes of drones buzzing around delivering packages sounds pretty far-fetched, too. But whether drone delivery is viable or not isn’t really the issue right now. What is important is that Amazon is talking about it.

Because that tells you where their collective head is. Truck fleets today are talking about finding drivers while Amazon is talking about delivering packages directly to consumers using flying robots. That’s a massive difference in outlook.

As Internet sales continue to explode, how much longer do you think customers are going to put up with missing a package because they weren’t home to sign for its delivery? How long before a fully transparent, real-time, automated delivery system brings you your package wherever you are: To your office or even a Starbucks? I’d say not very long, at all.

If you think you’re under pressure now to deliver vehicle uptime, fleet efficiency, fuel efficiency and green operations – just wait. The issues fleets are dealing with today are just the beginning. Add new technologies, completely new business models, alternative fuels and real-time telematics into the mix and think about that for a moment.

Because that’s where things are headed.

As the comments in my latest CCJ feature on low-tech trucks show, this industry today is firmly divided into two camps: Those who embrace new technology and those who reject it.

But I’m going to do you a favor right now and tell you which side is going to win that debate. It’s going to be the guys that embrace technology and put it to work for their benefit.

And that’s not just my opinion—history teaches us that over and over again.