Giles made the connection between street pollution and surface water pollution in his June 30 presentation to the workgroup in a meeting held at city hall in the Chicago suburb of Elmhurst, Ill.

He is a frequent speaker on environmental protection topics to public and private conservation groups.

During the presentation, Giles described a variety of street surface pollutants that enter the sewers and, eventually, the waterways, paying particular attention to silt as a menace to clean streams. He said silt is inorganic matter less than 80 microns in diameter that tends to remain suspended in solution and is difficult to remove from surface water.

“Eighty percent of silt, or debris that could become silt, is located within several feet of the gutter,” Giles noted. “It may be hard to believe, but the average street has about 1,000 pounds of debris per mile. The key to preventing surface water pollution is to keep that debris from entering the storm sewers.”

Giles cited data on the effectiveness of various sweeping technologies in removing silt from the streets, ranging from a low of 81 percent using standard wet dust-control mechanical sweepers, to a high of 98 percent using high efficiency regeneration sweeper technology.

“Sweeping is a classic pollution prevention technique,” Giles explained. “It removes pollutants before they enter the sewers and streams. Catch basin cleaning can be an important – although expensive – part of an overall strategy to keep sewers free of debris and silt. An effective sweeping program can help minimize that expense.”

Giles advised municipal officials to become familiar with thelgine science and technology of street sweeping, including the importance of frequent sweeping.

“As an industry, we have to help local governments understand that street sweeping can be an effective water-pollution prevention strategy,” Giles emphasized. “It’s more than just making the streets look pretty.” 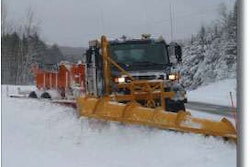