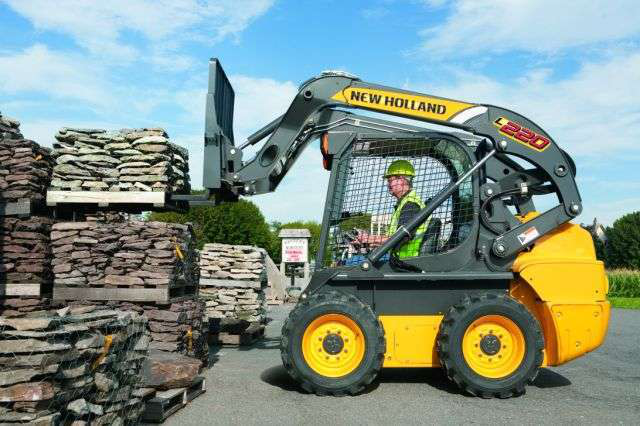 “New Holland skid steers are built around our customers’ needs. Our engineers used input from hundreds of customers to design the new 200 Series line-up,” said Dave December, marketing manager at New Holland Construction. “The New Holland skid steer loaders have been engineered from the ground up. No matter what your line of work, construction, landscaping or agriculture, you’ll work faster, smarter and more profitably with our new skid steers.”

The new self-leveling bucket feature on the five models with the Super Boom design allows attachments to maintain the preset location throughout the lift cycle.

“Customers using pallet forks or other attachments to load materials into confined spaces will appreciate the extra work they’ll be able to complete with the self-leveling feature,” December said.

The full-size cab has premium features such as air ride seats, heat, air conditioning, Glide Ride, and self-leveling bucket and more. Plus, we beefed up our engines with 20 percent more horswpower than their L Series predecessors.”

“A comfortable operator is a productive operator,” December said.

New Holland claims its cab is the “widest, most comfortable cab in the industry,” providing more head and foot room, and offering superior visibility in critical zones.

• An ergonomically designed joy stick with all controls.

Stability is an important part of being productive on the job site. The increased wheelbase on the New Holland 200 Series skid steer loaders allows operators to lift and haul more material, increasing productivity.

Daily maintenance on the 200 Series skid steer loaders is quick and easy, so operators can stay on schedule. Regular ground-level maintenance points are grouped together and service can be performed by opening the rear engine compartment and door.

For complete access to major components, the service technician only needs to remove two nuts and washers to tilt the cab forward. There is nothing to disconnect, and no special tools required. The new hydraulic system uses hydraulic oil, extending the service internal to 2,000 hours and significantly reducing the amount of disposed oil.

The 200 Series skid steer loaders also include proportional auxiliary control as a standard feature on all models.