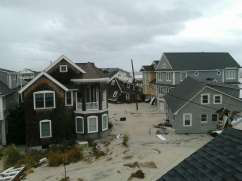 This is the collapsed home (in the photo’s center) along the New Jersey shore of the mother of a Randall-Reilly Construction Media Division’s friend. Better Roads is part of this division.

Hurricane Sandy is estimated to have caused $20 billion in damage and has left more than 50 dead and 8 million people across 16 states without power, according to an Oct. 31 report in the Chicago Tribune.

The transportation and construction industries will have a lot of work in the coming weeks and months as the Northeast looks to cleanup, rebuild and repair the damage from the storm.

My parents, who live in a suburb of Cleveland, Ohio, have flooded roads, with portions that are washed out. (Pipes were being laid so the road was already torn up, but now a portion is nearly impassable.)

My in-law cousins, aunts, uncles and grandmother from Long Island in New York and the Queensborough area in New York, have also been affected by the flood.

Even my adopted hometown of Chicago has had high winds, and the waves along Lake Shore Drive – which runs along Lake Michigan in Chicago – were remarkable. Waves of 21.7 feet were recorded at a buoy in Lake Michigan 50 miles from Milwaukee, according to the Chicago Tribune. (For the video, “Windy City Waves, go to http://www.chicagotribune.com/videogallery/73102924/News/Windy-City-waves.

Caranci said in the AP report that the economic damage in the short run could be heaviest for small businesses that lack the money and other resources to withstand lost sales. However, she said in the report that “it will remain to be seen how long disruptions to electricity and infrastructure persist.”

The devastation has been unthinkable. There is nothing positive about the damage or the deaths from the storm. But if we need to find a silver lining, the rebuilding that needs to take place might give a boost to the construction industry, which has been hard hit by the economic downturn and housing bust.

She noted in the AP report that the storm should give a boost to the construction industry. According to Caranci, many who lost construction jobs were skilled employees with disproportionately high pay, and the loss of those jobs hit the economy hard.

The $13 million represents 100 percent of the state-requested funds – $10 million from New York and $3 million from Rhode Island, according to a press release from the U.S. Department of Transportation.  These two requests are the first to arrive at the DOT and represent the first installment of federal-aid highway funds to help repair roads, bridges and tunnels in these two states. DOT says it is expecting other states impacted by Hurricane Sandy to apply for additional emergency relief funding in the coming days.

Caterpillar Inc. says is working closely with all of its Cat dealers in mobilizing equipment, personnel and other resources to help the affected areas in the aftermath of Hurricane Sandy.

Other Cat dealers across the eastern United States and Canada, including Milton Cat, Foley Inc. and Ransome, are mobilizing and have mobilized hundreds of generators since last week in preparation and response to the storm and are ready to deploy as the hardest-hit areas are identified.

The Randall-Reilly Construction Division (of which Aggregates Manager, Better Roads and Equipment World are a part) wishes the best for any of our affected readers and colleagues.