CIR plus microsurfacing get the job done

Cold-in-place recycling (CIR) followed by microsurfacing was not only a cost-effective treatment for Los Angeles County when it encountered unstable pavement conditions in one of its roads, but CIR was the perfect green solution.

The LA County Department of Public Works encountered problems with the road when it applied a chip seal in October 2010. The U.S. Forest Service required that the preservation work be done late in the year. “With cooler weather, it was not an optimal time to apply the cationic high-float emulsion with 5/16-inch chips,” says Imelda Diaz, Civil Engineer with the County. Upon initial placement of the chip seal, some of the chips raveled off, so the County raised the amount of emulsion, applying up to double the amount specified at first. That seemed to have solved the problem.

Then in April 2011, the Los Angeles area encountered a period of hot weather. “The pavement started moving; it became soft and gummy,” says Diaz. “The emulsion in the chip seal may not have fully reacted when it was first placed in the cooler months of October and November, and remained dormant through the winter. Then in April when we got that hot spell, the heat seemed to have activated the emulsion in the chip seal. So essentially it was like rock floating in the emulsion.”

Now the road was unsafe, especially for motorcycles. So the County closed Upper Big Tujunga Road for a time, and sought answers from contractors and suppliers in the area. It turned out that Pavement Recycling Systems (PRS) was doing some cold-in-place recycling work on the nearby Angeles Forest Highway.

“So essentially it was like rock floating in the emulsion”

“That got us thinking, ‘What if we used cold-in-place recycling to fix this problem on Upper Big T?’” recalls Diaz. “We wouldn’t have to haul in new materials, and if we could recycle what is there, that’s more viable than trying to remove everything and replace it with hot mix. Because most CIR treatments require a wearing surface, microsurfacing seemed like the best alternative.”

So the county consulted with Pavement Recycling Systems and with Doug Ford, President of Pavement Coatings (PCC), a Jurupa Valley, Calif., company that performs microsurfacing. The CIR work was then performed by PRS and the microsurfacing was performed by PCC as subcontractors to Torres Construction. 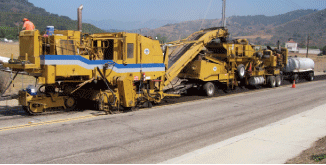 The cold-in-place recycling train features a milling machine followed by a recycler, which crushes the RAP, screens it, mixes it with emulsion and lays the material down in a windrow.

Only about half of Upper Big Tujunga required CIR work – 9 lane miles to be exact. The CIR was only needed on the half with excess asphalt on the road. “The high asphalt content on the road was initially a danger, and then it became an asset,” said Doug Ford. “With the cold-in-place recycling we ran 1.6 percent emulsion, but without that additional asphalt we would have run 2.5 percent or more of emulsion.”

“Leading off the CIR train was a Caterpillar PR 1000 milling machine, working 3 inches deep and 12.5 feet wide. The mill conveyed the material back to a recycler, which has screens and a crusher to reduce all recycled asphalt to 1-inch-minus,” says Chris Rogers, Superintendent for Pavement Recycling Systems. “When the material has been sized to specification, it passes over a belt scale that weighs it before the asphalt hits a pug mill.

“In the pug mill, a consistent 1.6 percent emulsion was added by a computerized injection system. The flow of emulsion is automatically regulated according to the weight of the material crossing the belt scale. If needed, the operator can add a bit of water to help the movement of the material,” says Rogers. “Much of the time, we just go with the water that’s added at the milling cutter, which is around 1.5 to 2.0 percent,” he says.

Once the emulsion was mixed in with the RAP, the recycler deposited the recycled asphalt in a windrow. From there, Granite Construction used a Cedarapids windrow elevator to pick up the material and place it into a paver hopper. Working one lane wide, the paver spread the material and compaction followed.

Microsurfacing came next – over all the entire 9 miles. Pavement Coatings used three microsurfacing machines, all truck-mounted VSS Macropaver 12B units, to apply a Type II microsurface. The application rate was 18 pounds per square yard. The microsurfacing machine uses a pug mill to mix fine aggregates, emulsion, and 0.5 to 1.0 percent portland cement as a setting agent, to control the break of the liquid. The final microsurface is one-quarter to three-eighths of an inch thick.

“The project was completed in just eight days. The CIR process required very few trucks for material delivery during construction,” Ford notes. “Using hot mix would have been difficult, because the nearest hot mix plant was 55 miles away. Plus, access to the site was difficult.”

By using the CIR and microsurfacing, the county was able to save approximately 25 percent compared to a conventional cold mill and overlay with 1.5 inches of hot mix. Pavement Recycling Systems estimates the CIR process saved 334 offsite truck trips, eliminated more than 12,523 truck miles, saved 4,420 tons of virgin aggregates and almost 200 barrels of oil. The energy savings was at least 32 percent compared to a hot mix alternative.

“When we can fix the cause of the problem, but still save money and minimize the impact to the environment, that’s what I call a perfect green solution,” says Diaz.

“One of the things that made this project so fantastically successful was the teamwork between the county, the suppliers, and the contractors,” says Ford.

State Highway 141 south of Grand Junction, Colo., was in pretty rough shape. Sections had rutted, and there was both fatigue cracking and alligator cracking. The rural asphalt roadway had served for 25 to 30 years with only chip seals and some patching to maintain it.

“At the time we were looking at paying $600 to $700 per ton of PG 64-22 liquid asphalt cement,” says Devin Ray, CDOT project engineer. “That put our cost for new hot mix at $60 per ton. So it cost us $11.65 per square yard for the 2 inches of asphalt overlay. By comparison, the hot-in-place recycling – including the virgin mix that we added – cost $7.27 per square yard. So that’s a 38-percent savings right there. And we got a rehabilitated road that is structurally comparable to all-new asphalt.” 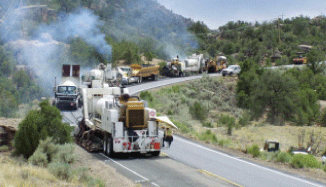 On Highway 141 the Paveover recycling train used two preheaters on the existing asphalt.

Lee Smith, president of the hot-in-place recycling (HIR) subcontractor Paveover, Albuquerque, N.M., says Highway 141 recycled well. “You’ve got to use the right process on the right road at the right time,” he says. “This is a case where they did that. Even if the cost of the hot recycling was the same as cold milling with an overlay, the hot-in-place recycling is a good thing to do. It saves substantial amounts of new aggregates and virgin asphalt.” The general contractor was Mays Construction Specialties in joint venture with United Companies of Mesa County, Colo.

CDOT’s Ray says he likes the in-place heating and remixing process. “I think you can do a lot with your smoothness too, because the recycling train allows you to add virgin mix to smooth out ruts or replace the asphalt in low areas,” says Ray. In fact, Ray says the smoothness and overall quality of the new roadway won an award from the Colorado Asphalt Paving Association – Best Overall Quality for Rural Resurfacing.

The next machine, called the A unit, is a heating-and-milling machine that mills the pavement to a depth of 1 inch and places it into a windrow. “The next thing that happens is that the second heating-and-milling unit shows up and that’s what we call the B unit,” says Mike Smith. “The B unit has a windrow pickup machine that picks up the asphalt from the A unit, heats the milled surface again and mills off 1 more inch. So now we have milled off a total of 2 inches.”

The B unit can also receive virgin hot mix. On the Highway 141 project, Ray estimates that Paveover added an average of about 30 percent virgin asphalt to the total recycled material. The recycled asphalt plus the virgin material, plus any rejuvenator needed, go to a twin-shaft pugmill unit on the rear of the B unit.

Because Highway 141 had received chip seals, that asphalt mixed in well with the recycled material and precluded the need for a rejuvenator.

Ray says that a contributing factor to the project’s award was the smoothness that Paveover and Mays/United achieved. At a minimum, a section of pavement must have a Half-Car Roughness Index (HRI) of 65 inches per mile to receive a smoothness bonus. For an HRI of less than 45, a contractor can win the maximum bonus.

On Highway 141, the contractors received the maximum bonus on many one-tenth-mile segments. And the team averaged 61 inches per mile on the southbound side and 62 on the northbound side. The total of bonuses awarded was $28,000, Ray says.

“You have to look at what process gives you the best life cycle cost,” says Lee Smith. “And on this project, everyone agrees that we got it right.”