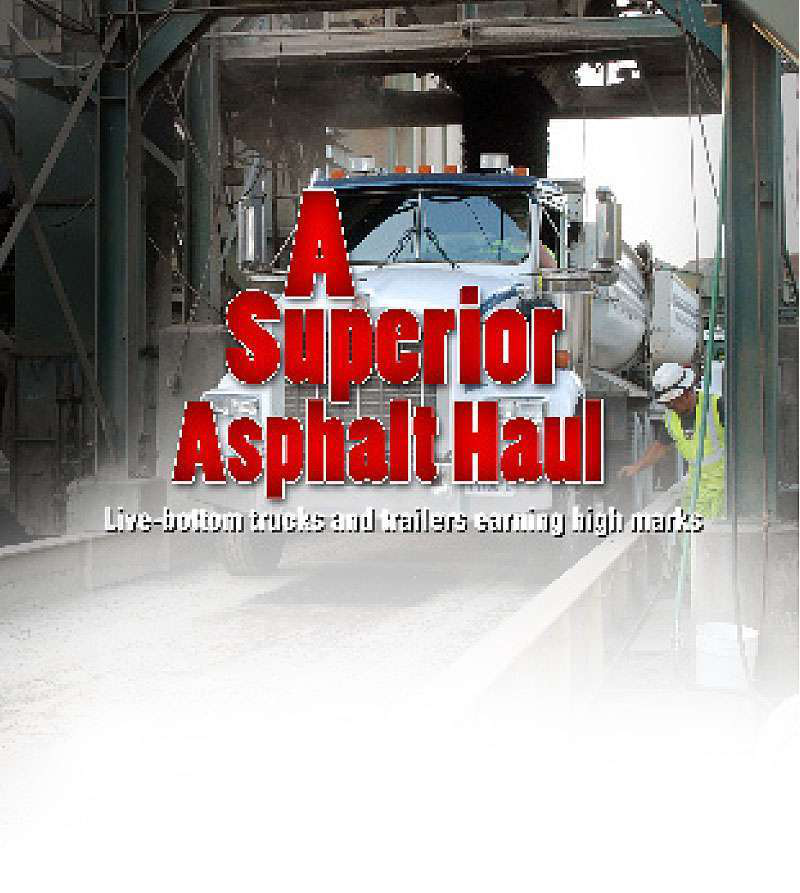 Some asphalt paving contractors run their own trucks; others gladly leave that task up to their subcontractors. Regardless, the hauling of mix is, we dare to say, a necessary evil.

“At some point,” says Volvo Construction Equipment’s John Sunkenberg, “you just have to put a load of asphalt on rubber. It’s the only way to get it from the plant to the paver.”

Fellow industry veteran Bill Rieken, paver applications specialist with Terex Roadbuilding, readily admits he’d just as soon never again see a conventional square- or rectangular-bodied dump truck back up to a paver or material transfer vehicle. “Conventional dump trucks are part of the problem of temperature differential and material segregation. They only contribute to the problem; they are not part of the solution,” he says.

A long hauling distance combined with a low ambient temperature can result in material coming out of the truck in cold clumps in need of extensive re-mixing or re-blending – a scenario only exasperated by an end dump. “When you raise that truck bed, you generally have material breaking and running in the hopper,” says Sunkenberg, Volvo road industry competency manager, “and you can deal with segregation on the sides and the corners.”

Live-Bottoms: “You’re moving the material more as a mass horizontally, rather than vertically, and that’s a good thing.”

“If we’re forced to use dump trucks,” says Rieken, “what some contractors will do is make you put in deflector plates in the back so the discharge area is the same width as the slats or the augers you are feeding, so you get some re-blending of the mix as you dump it out of that truck. This way, you’re not held to the paver too long. Otherwise, the mix that sits in the hopper wings prevents the truck from getting empty quickly, and you end up holding the truck.”

Even before considering the material unloading issues, including the safety hazards of lifting an end dump bed on uneven terrain or near overhead wires, the basic geometry of the hauling space itself is an issue with conventional dump bodies, says Rieken. “You’ve simply got more surface area on which to lose temperature.”

Three-point loading – asphalt placed at each end of the truck body or trailer topped off by a third load in the middle – is now an established practice at plants, says Sunkenberg. When the material is dropped from the surge bin in one large pile, aggregate will separate, roll off and collect at the base; dropping smaller amounts of mix at different points in the truck will minimize the risk of segregation. “I don’t think there is anyone not loading a truck that way these days,” says Sunkenberg, “because it’s just such an easy thing to do.”

With their reduced surface area, and less drop segregation, live-bottom truck bodies or trailers should be used for hauling asphalt, “whenever possible,” says Rieken.

“The really good contractors are using them,” he says. “It allows them to fill the hopper up more effectively, and allows them to empty the truck much quicker and get away from the paver, transfer vehicle or whatever they’re filling. It just allows for a better truck exchange on the site.” Keeping the hopper full, says Rieken, minimizes cyclical segregation by allowing hot uniform material from the next truck to blend with mix from the previous dump.

“You’re moving the material more as a mass horizontally rather than vertically, and that’s a good thing. Anytime you can eliminate dribbling and dropping of that material versus moving it as one piece, certainly you’re going to get better material in the end,” concurs Sunkenberg. “And you can tend to keep the hopper a little bit more full during that process. You don’t have stones falling, what, 15 feet from above.”

A live-bottom truck body or trailer typically has a hydraulically-powered conveyor belt on the bottom that pushes the material out of the back at a controlled pace. The tub never has to be raised to dump the load.

Highway Equipment Company (HiWay) marries the concept to the specific application with its T6034 Asphalt Transporter – a v-shaped, live-bottom Class 8 truck body available in lengths ranging 14 to 21 feet in 1-foot increments. With its powered end gate, the T6034 can move more than 23 cubic yards of asphalt per minute on a wide conveyor, controlled from the safety of the cab.

Unlike other live-bottom units that push the material through a gravity-held end gate that restricts flow, “the door on the back of this guy opens up and the material can flow out very quickly,” says Benjamin Boelter, HiWay’s engineering manager. “It usually takes only one revolution – technically half-a-revolution – of the belt to clean the material out of there. This will unload quicker than a dump body, if you lift the dump body all the way up and put it all the way back down again.”

The body is insulated and tarped to keep material temperatures constant, “and how far the unit hangs out in the back is designed so that it dumps better into a paver,” points out Boelter, who says the ability of the Asphalt Transporter to maintain the integrity of the mix reduces the need to rework the material at the paver. “It does, understanding that in certain applications there are requirements by the state to have a re-blending machine anyway.”

On the very week Boelter spoke with Better Roads, he and his colleagues at the HiWay plant in Cedar Rapids, Iowa were visited by an asphalt contractor from the Northeast, on hand to watch a double-digit Asphalt Transporter order roll off the assembly line. Production aside, safety is a key catalyst for the customer, whose crews are working in rough terrain and facing tipping hazards with dump trucks, says Boelter.

As bewildering as trucking can be for any paving contractor, the material quality problem – or at least a solution to the problem – doesn’t just lie in the hauling equipment, says Rieken.

“If we’re going to get serious about material temperature differential and material segregation, we’re going to have variable-pitch, counter-rotating augers in our paver hoppers. Instead of just conveying material to the back, you’re actually pulling from the full length of the hopper and getting a very aggressive re-blending process, instead of just transferring. It’ll just eat those cold clumps up,” he says. “When you’ve got the long hauls and the cold ambient days, if you have augers it’ll just take all those cold clumps away and you’ll have a nice uniform mix materially and temperature that you can still put down.”

It’s an evolution, points out Sunkenberg. “Windrow paving in a lot of ways is the original material transfer vehicle, on just such a smaller scale,” he says. Having a surge of material – in the case of windrow paving already on the roadway – allows the crew to avoid paver stops, running at a consistent 30 feet per minute all day long if desired. Where cooler temperatures or severe weather is an issue, a material transfer vehicle answers the need by placing a surge of material into re-mixing apparatus ahead of the paver. This accomplishes two objectives – eliminating temperature or material segregation and providing for non-stop paving.

“And those,” says Sunkenberg, “are the things you are most concerned about with trucking.”

Segregation in the mix may occur during the hauling process, but answers to the problem may lie at the paving train, including in the paver itself.

A Remix paver offers re-blending capabilities at the last stage in the paving process by replacing traditional slat conveyors in the hopper with two sets of counter-rotating augers. It is the combination of the augers pulling uniformly from all areas of the hopper – rather than the front-to-rear pulling motion of slat conveyors – and the re-blending action which helps reduce both thermal and material segregation.

The Remix system is available on highway-class Terex pavers. Remix pavers can receive material directly from trucks and trailers, or can be used in conjunction with material transfer devices.

What’s a poor driver to do

They are often the forgotten ones . . . until, of course, they’re nowhere to be found when the paving crew needs more mix. Then, everybody from the superintendent in the fancy pickup right down to the rake jockey behind the screed is screaming about them.

They are the truck drivers – admittedly for many paving contractors the most misunderstood and frustrating “contributors” to the paving job. Normally, we’d refer to everyone who plays a role as “members” of the team – but often those truckers aren’t even that officially. A good number of road builders job out their trucking needs to subcontractors, often independent owner-operators in essence competing with the truck in front or behind them in line ahead of the paving train.

Even paving equipment experts – usually focused on either the plant or the jobsite end of the equation – have historically tended to skip over the hauling part that links the two ends.

Fortunately, that is changing.

The very first page of text in Volvo Construction Equipment’s Paving and Compaction Guide, Best Practices, is devoted to Truck Driver Responsibilities. Primarily, these are to properly load the truck at the plant and to maintain consistent delivery of the hot mix – in a homogenous mass avoiding segregation – to the material transfer vehicle, paver or windrow at the jobsite. Says Volvo, the Best Practices for doing so:

2. Cover the load as required to maintain mix temperature and reduce emissions during transport.

3. Drive safely to the paving site. Avoid delays. Move into position ahead of the paving train.

4. Prepare to “break the load” and unload the mix.

5. Back the truck into position and align it with the material transfer vehicle, paver or windrow. Be sure not to bump into push rollers.

7. After discharging the mix, pull away from the material transfer vehicle, paver or windrow.

8. Move to the assigned cleanout are to remove mix residue from the truck bed or tailgate.

9. Return to the plant for the next load of hot mix.

It’s a simple process indeed, but one clearly fraught with challenges along the way. And, by stating the process clearly, the recognition of the important role truck drivers play in the paving operation is an appropriate way to head off those challenges . . . before everyone starts yelling!