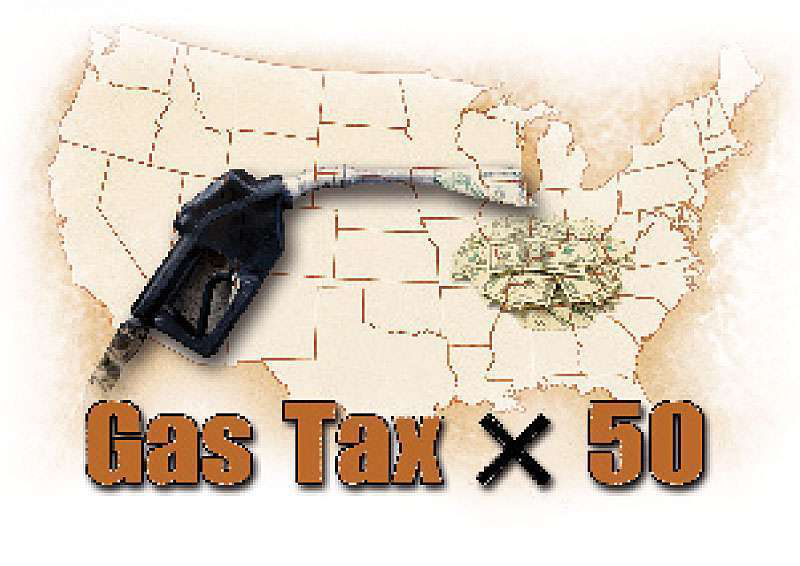 A new 50-state report reveals that state governments are losing out on more than $10 billion in transportation revenue every year, contributing to an estimated $130 billion drain on the economy that results from higher vehicle repair costs and travel time delays.

The report, from the Institute on Taxation and Economic Policy (ITEP), says state lawmakers reluctant to update gas taxes have cost their states, on average, $201 million in annual revenues. It also shows that the average state has not increased its gas tax rate in over a decade, and 14 states have gone 20 years or longer without an increase. Adjusting for construction cost growth, the average state’s gasoline tax rate has effectively fallen by 20 percent, or 6.8 cents per gallon, since the last time it was raised, says the report. Diesel taxes have fallen by a similar 18 percent, or 6.0 cents per gallon.

“It’s basic math,” says ITEP Senior Analyst Carl Davis. “The road repairs you could buy in 1990 with 20 cents, for example, are going to cost 34 cents today. But we still see some states collecting the same flat 20-cent tax that they did back in 1990. That’s the definition of unsustainable.”

2. Restructure state gas taxes so that their rates rise automatically alongside the inevitable growth in the cost of transportation construction projects.

Editor’s Note: The Institute on Taxation and Economic Policy (itepnet.org) describes itself as is a nonprofit, nonpartisan research organization that works on federal, state and local tax policy issues.

If you own roads, design roads, plan roads or have to work out how to manage them, consider this:

Florida is home to one of the highest percentages of residents aged 65 and older in the United States. But very few of them have thought about their future behind the wheel.

In fact, 13 percent of older driver respondents to a new survey developed by Florida State University (FSU) and the Florida Department of Transportation (FDOT) indicated they would not stop driving at all, with 3 percent expressing the opinion that they would die before they would stop driving.

Older drivers are at a disproportionate risk for being involved in a fatal vehicular crash, according to John Reynolds, the Eagles Professor of Sociology at Florida State and director of the university’s Pepper Institute on Aging and Public Policy.

Among the findings, according to FSU:

• Most older drivers don’t plan for a future day when they may be unable to drive safely. Eighty-three percent of survey respondents aged 65 and older, and 92 percent of 50- to 64-year-olds, report that they have no “transportation retirement plan.” Very few (slightly under 4 percent) plan to use a community driver program or paratransit service.

• Many aging road users see no alternatives to driving in their communities. Forty percent of respondents aged 65 and older reply that they ride with family or friends, 26 percent say they walk, and 15 percent say there is no other way to get around other than driving.

China State Construction Engineering Corp., the People’s Republic’s biggest builder by market value, intends to buy a U.S. construction company next year as it begins investing as much as $2 billion in the world’s largest economy, according to a Bloomberg report. The builder has shortlisted two potential takeover targets, including one with annual sales of about $1 billion, says the report.

While we keep worrying about funds for our highways and bridges from Washington, the concern over what states can find in their coffers has also been a constant for the past couple of years. Now the Rockefeller Institute of Government is reporting that tax collection data for the July-September quarter of 2011 shows growth in overall state tax collections. Though “more modest” than the previous three quarters, the growth was “still strong.” Among 48 early reporting states, all but three showed gains in collections over the same quarter in 2010. We now have seven consecutive quarters with rising state tax collections following five quarters of decline triggered by the Great Recession. And after those seven quarters of growth, overall state tax revenues have recovered to pre-recession figures.

—TxDOT spokesman Mark Pettit, as Dallas — still smarting from its struggle with a freak snowstorm during Super Bowl week last year — gets it first fleet of snowplows.

Clarification: In the “The State of Bridges” article in Better Roads’ November 2011 issue, the number of Texas’s structurally deficient (SD) and functionally obsolete (FO) bridges were transposed in the left-hand column on page 11. Texas has 1,469 SD bridges and 7,480 FO bridges. The table on page 12 titled, “Highest Percentage of SD/FO State/Interstate Bridges” contained the data for “Highest Percentage of Total SD/FO City/County/Township Bridges.” The corrected article is on the Better Roads website, www.betterroads.com/the-state-of-our-bridges/, and also in the November digital edition on the website.