Making high-RAP mixes — an art and a science

Many state transportation departments have saved tens of millions of dollars by using reclaimed asphalt pavement. RAP is worth the same as the virgin materials it replaces. And to mill, haul and process RAP costs only a fraction of what virgin mixtures cost. With more RAP, contractors can produce a lower-cost mix and pass the savings along to owner agencies.

Moreover, warm mixes made with a high RAP content have a fatigue life that is far superior to a 100-percent virgin mix, according to recent studies from the National Center for Asphalt Technology(NCAT).

“The conventional wisdom has been that high-RAP mixes would crack,” says Malcolm Swanson, vice president-engineering, Astec. “They’ll crack in the laboratory, because of the way the tests are run. But the NCAT field tests show they didn’t crack. Those results to me were just astounding.”

Today, large metropolitan areas are accumulating large amounts of RAP and they don’t have space to store it. Even with 50-percent RAP mixes – which is higher than most agency specifications permit – only half the RAP that is milled up gets recycled.

So the heat is on to run more RAP.

But there are inherent problems with making high-RAP mixes. The RAP has to be heated in the drum mixer to the point that the recycled binder melts from its aggregate and even partially coats some of the virgin aggregate. That raises the problem of how to introduce the RAP into the drying process so that it becomes dried and heated – but not burned – in the dryer flame. (In a counter-flow drier-mixer, the virgin aggregate is introduced at one end of the drum and is conveyed toward the burner flame.)

The second major problem with high-RAP mixtures is that they tend to overheat the bags in baghouses, which are the air pollution control systems on all asphalt plants. Exhaust gases from the dryer drum leave the drum and flow into the baghouse, which houses many tall, narrow aramid bags to filter pollutants out of the gases.

“Now the solution to running 50-percent RAP is very easy,” says Mike Hawkins, president of Maxam Equipment, a plant manufacturer. “You just have to add more flights. That way you increase the density of the veil. That will get your stack temperature down to where you can have both a high percentage of RAP and lower baghouse temperatures.

“But the problem with doing that concept is that when you go back to running 100-percent virgin mix, now your baghouse temperature will become too low,” says Hawkins. “Now your veil is way too heavy for virgin. It won’t let enough heat escape to keep your baghouse up to temperature.” A baghouse that becomes too cold will cause mud accumulation on the bags because of moisture condensation. That can stop up the pores in the bags and they won’t work. And it can cause corrosion in the baghouse.

Manufacturers have worked for years to solve these problems. And their various solutions are a source of disagreement, even controversy, in the industry. There are many different flight shapes, for example.

But the ideal asphalt plant would have one set of flights that permits a contractor to run high-RAP mixes – and virgin mixes – and maintain proper baghouse temperatures over a range of conditions. One of the big variables in conditions is the amount of moisture in the RAP. Wet RAP has to be dried out. (That’s why some astute contractors keep a roof over their RAP piles – to keep the rain away and save on their fuel bills.)

Astec guarantees that its standard Double Barrel plant will run 50-percent RAP if the recycled material is at 5-percent moisture. The Double Barrel design superheats the virgin aggregate to temperatures well above the mix temperature of 300-325 degrees. Heat is transferred to the RAP by conduction from the virgin aggregate, says Mike Varner, director of thermal systems and research, Astec. As well, the RAP is heated by the steam explosion that occurs when the moisture in the RAP contacts the hot virgin aggregate.

In the Double Barrel, aggregate moves downhill through the dryer and is dried. A mixing chamber is created by an external stationary drum around the rotating mixing drum. The dried virgin aggregate flows behind the burner flame and drops into the mixing chamber that starts at the downhill end of the drying drum. There, metal tips – mounted to the outside of the rotating drum – mix and push the material back uphill in the annulus between the two drums. RAP is introduced shortly after the material drops into the mixing chamber, and liquid binder is added a bit later.

Varner says the Double Barrel can run high-RAP mixes for a couple of reasons. One is that the mixing chamber forms an oxygen-poor environment because the steam coming off the RAP serves as a blanket in the mixing chamber. “As a result, you have the potential for less oxidation of the mix in general by virtue of that steam blanket,” says Varner. “And, with the Double Barrel, anything that heats up in there is actually radiating energy back into the mix instead of being wasted up the stack or emitted from the drum surface. A certain portion of the heat is radiated directly into the mix. So the hottest part of the rotating drum is able to impart some of its energy to the mix.”

“We’ve been working with variable-frequency drum drives off and on for 20 years with varying degrees of success,” says Astec’s Swanson. “The first effort we made was intended to help control stack gas temperatures, or baghouse temperatures, with high-RAP mixes. And finally here this year, many years later, we have ended up with something that succeeds.” The underlying principle is that to control the speed of the drum drive will help control the showering rate of the aggregate – the veil density.

What’s more, Astec changed flight designs. Over the past few years Swanson says the company has been working with a type of computer software called Discrete Element Modeling. “With this software we’re able to model showering from flights,” Swanson says. “So by trial and error, using this software, we optimized the shape of a Vee cut into the flights. We came up with a flight that would give us a pretty uniform veil, whether the flight had just a little material in it or was full to the brim.

“Once we did that, and we married that to the variable-frequency drum drive and found that as we changed the speed of the drum drive, we could change the rate of showering,” Swanson continues. “Instead of speeding the drum up, and suddenly we’ve got all the aggregate picked up and we’re right back to having a hole in the veil, the effect was that we could speed the drum up and have increased veil density.

“And conversely we could slow the drum down and put less aggregate in the air,” Swanson says. “So that turned out to be quite successful. We were able to manipulate baghouse temperatures by as much as 100 degrees using this combination.” To that combination Astec added an automatic control that takes temperature input from the baghouse inlet and adjusts drum speed to maintain that temperature to an operator-entered setpoint.

In contrast to Astec’s solution, Maxam Equipment uses a patented system to expose the RAP directly to the burner flame. Conventional wisdom, says Hawkins, says that will burn the RAP. Other plant manufacturers have implemented systems that shield the RAP from the flame. “But the analogy I use is the suntan,” says Hawkins. “If you’re getting a suntan, you need to get out in the sun. Now, when you get out in the sun, you can burn yourself. So what’s the key? You have to control your time of exposure.

“That’s exactly what Maxam does,” says Hawkins. “We don’t put any shields in. We bring our RAP in directly into the combustion zone so we expose the RAP directly to the flame. It’s not veiled through the flame, but it is in front of the flame. We bring it in through a recycle collar, and we have our own special type of flights. But the material comes out on top of those flights, not underneath the flights, like it does with another manufacturer.

Hawkins says Maxam uses a heat recovery system, called a Maxamizer. The company’s design uses many flights for the RAP conditions. “So we have a really low stack temperature,” says Hawkins. “When we run 50-percent RAP, our stack gas temperature is only 250 degrees. That’s at least 100 degrees less than anybody else.”

Tarmac International designs its counterflow dryer to introduce RAP in the tailing one-third of the burner flame. “We enter the RAP downhill and under the coolest part of the flame,” says Stephen Latenser, an account manager for Tarmac. “Depending on the size of the drum, that’s about one-third the length of the burner flame and next to the burner head.”

Tarmac asphalt plants heat the RAP by conduction from superheated virgin aggregate and radiant heat from the flame of the burner. “You don’t really want to heat your RAP through the convection in the air, where blue smoke can be created,” Latenser says. “The convection section of the dryer is where you get your virgin rock up to 500 or 600 degrees. If you got your recycled product up that high, you would oxidize the RAP binder and cause an emission problem.”

On a Tarmac plant, virgin binder is added behind the burner, in the mixing zone. “By the time the RAP has traveled from under the burner and into the mixing zone the RAP has had time to increase in temperature while in contact with the superheated virgin rock,” says Latenser. “So as soon as virgin aggregate touches RAP, we consider that part of the RAP heating zone.” 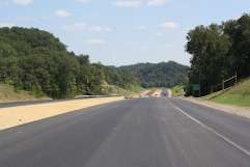 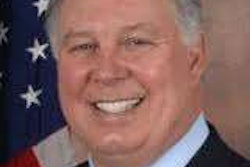 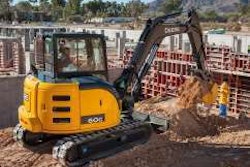