Effective on Jan. 1, 2015, the New York City Department of Transportation will allow asphalt mixes containing 100 percent reclaimed asphalt pavement (RAP) to be used on city streets. The city government has also ruled that all asphalt mixes under city jurisdiction, including commercial projects that require Building Department approvals, with few exceptions, must contain at least 30 percent RAP.

With this new law, New York City is blazing a new trail by setting a floor for recycled content rather than specifying a maximum allowed content. Here’s some commentary from the new law: “The benefits of using reclaimed asphalt pavement are clear from both a financial as well as environmental perspective. Yet, the city council finds that despite its established use and the clear environmental and fiscal benefits, use of reclaimed asphalt pavement at both public and privately owned facilities could increase significantly without sacrificing asphalt strength or jeopardizing local supply. The 30 percent minimum recycled content set forth in this legislation is intended to serve as a floor – not as a ceiling.”

The five boroughs of New York City use asphalt from nine different plants. One of them, a plant in Long Island City, has successfully made asphalt with 100 percent RAP for commercial customers since 2011. Another hot mix plant, in Flushing, New York, routinely makes mixes using 60 percent RAP.

“We’re hopeful that in the near future, our mixes will comply with the New York City specifications,” says Michael Capasso, owner and president of Green Asphalt LLC, which owns the Long Island City plant. The plant only makes asphalt containing 100 percent RAP. Capasso sells it for approximately 30 percent less than an all-virgin mix costs. The material is used mostly for parking lots, patchwork, and temporary paving, today. Very little is used for public works projects, but that should change in 2015 with the new ordinance.

Studies show that many state transportation departments are not even using the amounts of RAP permitted by their own specifications. In 2007, a survey was conducted by the North Carolina Department of Transportation (NCDOT) and sponsored by the AASHTO Subcommittee on Materials. Survey responses were collected from all 50 States as well as Ontario, Canada. The survey showed that the majority of states allowed the use of RAP in asphalt mixtures. The 2007 average national usage rate was estimated to be 12 percent. RAP was typically permitted in subsurface, base, and shoulder mixtures but may have been restricted in surface/wearing courses. Very few states allowed little or no RAP due to concerns regarding performance.

New York City estimates that the new law will save $2.3 million annually, compared to current practice. In fiscal 2014, the city’s crews resurfaced approximately 1,000 lane-miles of roadway using some 1 million tons of asphalt. The cost of that resurfacing work is approximately $190 million, and the city’s contains an average of 40 percent RAP. Currently, the city only purchases 100-percent-RAP mixes for maintenance purposes – pothole patching, temporary pavement, and demonstration projects.

Better Roads asked the city what percentages of RAP they expect to use under the new law. “The city’s DOT has made incremental changes in its use of recycled asphalt product,” said the DOT in a statement. “The DOT has achieved its current allowances by coupling new research and development efforts with long-standing historical practices. With further research and development, NYC’s DOT hopes to increase the percentage of recycled content in its paving mixes.”

“We can run 60 percent RAP,” says Ken Tully, owner of the Willets Point asphalt plant in Flushing, N.Y. “We have run a little bit at 65 percent, and I’m going to try it a little bit more. If we had more business to do it, I think we’d be inclined to try a higher percentage.” Tully’s plant is a specially equipped Astec model with a variable-speed dryer and newly designed flighting in the drum.

Tully says his price for a 60 percent RAP mixture is about $58 per ton, placed in the truck but not paved. By contrast, an all-virgin mix costs about $80 per ton in New York City. “In our market, for every 10 percent of RAP that you increase, you save $3.50 per ton,” says Tully.

At the Green Asphalt plant that runs 100 percent RAP, process developer Bob Frank says he bought used components to create the machine, but the pollution control device is patented and is unique. It can run either as a counterflow plant or parallel flow, but is currently set up in the counterflow configuration. (The RAP enters the drying drum at the opposite end from the burner.)

Green Asphalt fractionates RAP into three sizes: a sand fraction, a nominal half-inch size for surface mixes, and a nominal one-inch size for base layers. “They can adjust or blend those three sizes to make a full complement of mixes,” says Frank, who is the founder of RAP Technologies, the company that developed the 100-percent RAP process.

Similar to many early entry counter-flow drum plants, the plant exposes RAP directly to the burner flame, but not for long. None of the recycled binder gets burned off, Frank says.

“You create blue smoke, that’s correct,” he says. “But you don’t burn off or irrevocably damage the asphalt binder.” We asked how the blue smoke is controlled. “A multi-stage pollution control device first removes airborne particles and a final filter removes blue smoke,” says Frank.

Recycling agents, essential to producing a quality product at RAP contents above 25 percent, are introduced at the dryer discharge.

Frank says the plant can handle RAP with any moisture content, because it is heated directly. “We’re not dependent on heat transfer from the fresh aggregate to heat and dry the RAP,” he says.

“Green Asphalt has been making commercial mixes since 2011,” Frank says. “It follows from a demonstration project hosted by New York City that went into operation in November 2001 and paved streets across Queens Borough with 100 percent mix. Those streets are still holding up to the rigors of New York winters and traffic.” 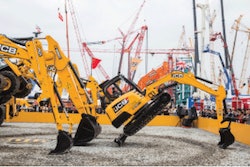 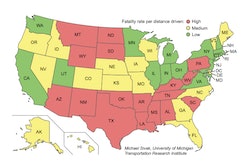 Deadliest and safest places to drive in the United States 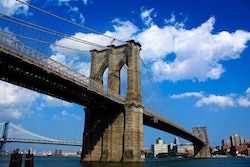