Trimble Showcases the Autonomous Construction Site of the Future (Video)

Trimble gave contractors a window into the future of construction jobsites at its recent Dimensions user conference, as an autonomous Link-Belt 220 excavator, a remote-controlled Komatsu D51PX bulldozer and an autonomous Dynapac CA2500 compactor worked in unison to execute a project.

Check out the video above to see the trio in action.

Here's how Trimble pulled it off:

Sensors on all the machines are able to account for things that can’t be predicted without knowing the existing situation on site. For example, the compactor will stop itself if the dozer pulls out in front of it.

As customers start to put these technologies on their equipment, they see the value of it, Trimble Product Manager Eric Crim told members of the media during a tour.

“The dozer steering technology is not autonomous but it’s a step along the way,” says Crim. “Once that operator gets used to the steering, the next step may be to take another piece away, and eventually, get to this. But we can’t just take it from point A to point B without bringing the customer along.”

Dimensions was attended by more than 5,000 Trimble users and dealers from November 7 through 9 at The Venetian Resort and the Southern Nevada Operating Engineers Joint Apprenticeship Training Center in Las Vegas, Nevada. 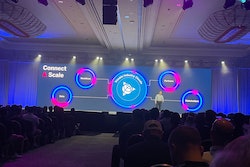 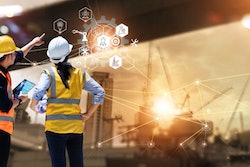 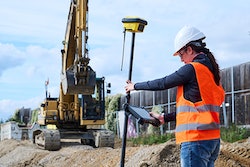