As a manufacturer in both the agriculture and construction industries, John Deere is primarily recognized for its signature green and yellow tractors.

“You will not find two industries that have a larger impact on our world and all of us than agriculture and construction,” John Deere CEO John May said.

Few would think to label the company as being invested in technology. They’re wrong.

Making a bold statement to the contrary, May took the stage at CES 2023 in Las Vegas as the first agriculture technology executive appearing as a keynote speaker. This marked the fourth time the company has appeared at CES and the first time showcasing its construction equipment, including a new electric excavator conceptual model.

"Technology is the key to driving sustainability on the farm and construction sites and empowering our customers to be more efficient and profitable in the face of significant challenges," May said. "That's why we've developed robotics that leverages machine learning and computer vision. This technology is good for our customers' business, for the planet and all of us."

Coming into the industry nearly 25 years ago, he noted that most manufacturers were focused on equipment and making it bigger and more powerful.

"The bigger the equipment was, the more efficient it was in a field, building a highway or at a construction site," May said. Today, that “bigger is better” philosophy for equipment is fundamentally changing.

"Farming, construction and roadbuilding is less about the size of the machines and more about technology, intelligence and sustainability, both economic and environmental," he said.

As a further example, before the event, John Deere's fully autonomous tractor was recognized with a CES 2023 Innovation Awards Best of Innovation Honoree in the Robotics category and as an honoree in the Vehicle Tech & Advanced Mobility category.

"We've expanded beyond agriculture into earthmoving, roadbuilding and even backyards around the world, bringing the same innovations to help our customers solve their biggest challenges,” May said. “Our deep understanding of the way our customers do business is what gives us the necessary insights into the challenges they face and the opportunities to use technology to create value.”

Despite its ag roots, he noted that this use of technology and innovation to help customers is not a new philosophy for John Deere.

“We've been using technology to solve challenges for nearly 200 years and continue to innovate and move industries forward year after year,” he said.

Leveraging a vast “tech stack,” the CEO said the company has given its machines “superhuman capabilities.”

While the machines are doing important jobs, they’re also collecting and transmitting data that farmers and construction workers use to make more informed decisions. Also, according to Jahmy Hindman, John Deere chief technology officer, technology and data are positively impacting the environment.

For example, he said farmers growing corn on 90 million acres in the U.S. apply approximately 140 million gallons of starter fertilizer every year to help their seeds turn into productive plants. With ExactShot, the company's latest release using sensors and robotics, farmers can reduce the amount of fertilizer needed by more than 60% with precise application. Hindman said that would be a savings of nearly 93 million gallons or, based on current commodity prices, nearly $650 million in input costs.

“It also prevents that wasted fertilizer from encouraging weed growth or increasing the risk of running off the field and into a waterway,” he said.

In addition to fertilizer, he said, U.S. farmers also use more than 23 million gallons of herbicides annually for weed management. Hindman said that by using Deere’s See and Spray technology, that number could be reduced up to two-thirds, saving farmers nearly $1 billion.

"Our technology isn't only being used in agriculture, it's also critical in construction and roadbuilding," Hindman said.

Last year, John Deere construction equipment was reportedly responsible for paving over 500,000 lane miles of road, sufficient to circle Earth about 20 times, according to Hindman.

"Using the technology John Deere has available today, those lane miles can instead be installed using our cold in-place recycling methods and equipment, which save up to 90% of that new road material," he said. According to his calculations, this would potentially save up to 1 billion tons of asphalt production and 53 million tons of CO2 emissions.

“These are just three examples of the real impact our technology is having and will continue to have on a global scale, improving efficiency, economics and sustainability for our customers,” Hindman said.

Beyond the monitors, the cameras and precise applications in the machines, Hindman discussed sustainable energy and what keeps the equipment operating.

“Some of you may find this statement a bit controversial, but the path to a sustainable future does not rely only on electrification to power our vehicles,” he said.

"The reason we're focused on all four of those rather than just one is because we need to meet the economic and efficiency needs of our global customers," Hindman said.

According to John Deere, biofuels like ethanol and renewable diesel, which may be created from plants, must be just as much a part of the solution as batteries.

As another alternative, biofuels produced from corn or soybean feedstocks, such as ethanol and renewable diesel, produce about 50% less greenhouse gas emissions compared to their petroleum-based counterparts. He said based on today’s farming practices and current U.S. power generation, the bio-carbon intensity rivals that of electrification.

“Biofuel supports a circular economy where a farmer can utilize a portion of the crops that they grow, like sustainably grown grains and oil seeds to power the very machines that they use,” Hindman said. “Those biofuels aren't limited to John Deere ag machines. They can power everything from cars to semis to construction equipment and airplanes, reducing carbon emissions and the pressure on all of our natural resources.”

However, he pointed out that the excitement for the future of biofuels shouldn’t detract from electrification.

"The world benefits from all of these solutions to meet our global clean energy," Hindman said. "In the construction industry, in particular, electrification is going to have an enormous impact on both workers and communities around the world."

He pointed out that the lower noise of electrified construction equipment in urban areas allows the work to begin earlier and end later.

“This causes less societal disruption, and it creates a safer worksite through an improved ability for the workers to communicate on the job,” Hindman said. “This will result in projects getting completed faster, all while eliminating those combustion emissions in those heavy urban environments.”

“Through our work with Kriesel, we’ve invested significantly in industrial applications of patented battery technology that provide high performance and a longer battery life," Hindman said. “The future will bring electrified technology to enable homeowners, farmers, construction workers and roadbuilders to do their job more efficiently, more economically and more sustainably." 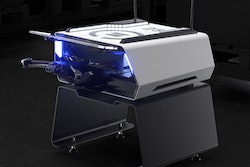 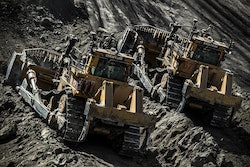 Caterpillar to Show Its High-Tech Side at CES 2023 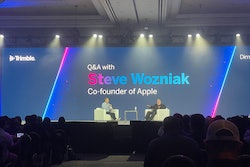