Typically, when you hear about drones or UAVs (Unmanned Aerial Vehicles), you think of the military and a stealth way to monitor what goes on behind enemy lines. And if you’ve ever played the blockbuster video game series Call of Duty, you’ve likely shouted to your teammates with glee about deploying one of these remote control vehicles that can quickly give you a birdseye view of all the action and where your enimies lie in wait.

When it comes to surveying, we’re not looking for enemies, but that doesn’t mean UAVs can’t be a huge help in leraning the lay of the land in question.

And that’s where Gatewing, a Belgian company acquired by Trimble in April 2012, comes in. Gatewing President Maarten Vandenbroucke delievered an interesting session at Trimble Dimensions 2012 Tuesday morning on the fast and high-quality survey imaging UAVs can provide.

Vandenbroucke explained that the company’s X100 UAV was created and designed specifically for surveying.”Every design decision we’ve made has led us here,” he said.

Vandenbroucke said that while Unmanned Aerial Surveying is still very much an emerging technology, it is already possible to map smaller to medium-sized areas “in a very economical way.” An added benefit to surveying via remote control is it does away with the need of walking through potentially dangerous sites like landfills and waste dumps.He showed off a slide of the X100 surveying UAV which looks like someone crossed a stealth bomber with the curves of a toy rocket ship from the 1950s. Vandenbroucke said the X100 was designed with sea gulls in mind, and at 2 kilograms, it’s almost as lightweight as one of the 1.75 kg birds. The X100 has a cruising speed of 75 kilometers per hour (46 miles per hour) and when met with winds it can achieve speeds up to 65 kph (40 mph). Vandenbroucke said the X100 gets about 45 minutes of flying time per charge of the battery.

The process of using the X100 to survey a site is pretty straightforward. Vandenbroucke said it begins by uploading a map of your site to the X100 and its companion computer software either from a map service like Google’s or your own maps. Then it’s a simple as selecting the area of the site you want mapped and launching the X100.

After the X100 has taken off, its surveying is fully-automated. As it flies, it takes image after image of the site below and plots them to the map you’ve uploaded. Once it has landed, you simply connect the X100 to a computer equipped with Gatewing’s Stretchout mapping software. Stretchout takes the RAW image files and log files from the X100, and processes them as orthophotos, photos of the Earth’s surface that are free from distortion and true to scale. Stretchout can output these photos to various image processing software or its own cloud processins server which does the processing for you.

Vandenbroucke noted that 3D images of the site are auto-processed by the software and a cloud image processing option is available as well. With the cloud option, you simply upload the X100’s data to the cloud and it does the processing work for you. Software options like StretchOut and INPHO simply give you more control over the processs.

But it’s not just a faster way to survey a site. Vandenbroucke said the X100 offers more accurate plotting than a ground-based GPS survey because it’s not possible to plot as many points on the ground as the X100 is capable of above.

Beyond construction surveying, Vandenbroucke said the X100 is being used by Gatewing clients as a tool for taking aerial images for asset and inventory management, to monitor the progess of road construction projects and even vegetation monitoring. 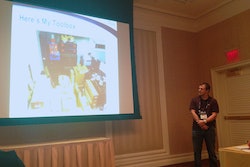 Buying is half the battle: Using the right technology and mindset for the job (Dimensions 2012) 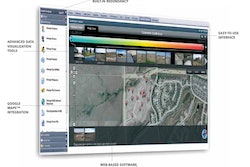 The backbone of the Connected Construction Site (Dimensions 2012) 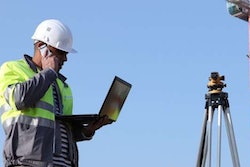 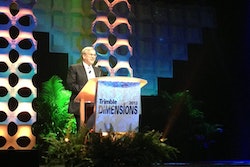