This is Part 1 of a four-part series on managing fuel costs as part of the Fuel Cost Volatility Survival Guide. (Read Part 1, Part 2, Part 3, and Part 4 or download the entire guide.)

You can read it in the headlines and see it on your bottom line: The construction economy has been turned upside down. First, supply chain restraints put major pressure on sourcing construction equipment – both new and more recently used channels. Then, supply chain challenges and other economic factors led to shortages of materials, parts, and labor, driving up those costs, too. Massive increases in fuel prices are just the latest headache.

To illustrate, the producer price index for inputs to new non-residential construction rose 20.9 percent over the past 12 months. At the same time, an index that tracks what contractors say they would charge to erect five types of nonresidential buildings rose 19.9 percent. The cost index has risen more than the bid-price index on a year-over-year basis for 19 straight months, notes Ken Simonson, Associated General Contractors' chief economist. And let’s not forget labor. Worker pay jumped 6.3 percent in May from the prior year, the largest increase in 40 years.

How the price of fuel affects your operating costs

On top of all those rising costs, fuel prices have increased 74 percent over the last 12 months. Fuel currently comprises nearly 42 percent of your machine operating costs according to an analysis by EquipmentWatch, owned by Equipment World's parent company, Randall Reilly. (Other operating costs include field labor and parts, lube, and track or tire wear and tear.) On-highway diesel fuel hit an all-time record on June 6, jumping to an average of $5.81 per gallon, $2.59 higher than one year ago.

Such fuel cost volatility especially impacts contractors with large projects already in motion. These bids were approved months, sometimes years ago, and in many cases, there is no recourse for recouping the unexpected added fuel costs.

With profit margins hovering around 3 percent for heavy civil projects, such discrepancies between what contractors pay versus what they can charge are not sustainable, says Nick Holsinger, EquipmentWatch Strategic Account Manager. 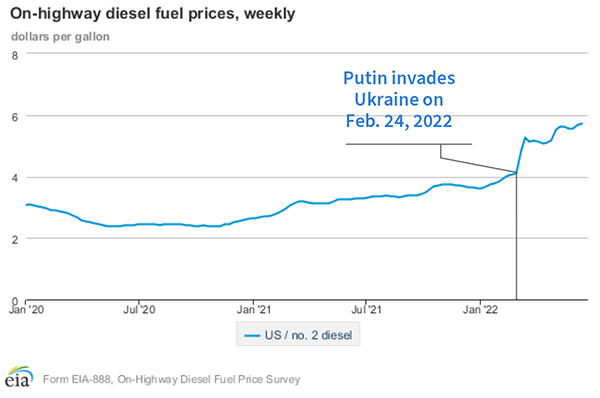 The price of diesel fuel was $2.40/gallon two years ago and started increasing in March of last year. Then in March of this year prices shot straight up for 2 weeks (due in part to Russia’s war in Ukraine and the response via sanctions, according to GasBuddy), before leveling off briefly and then beginning another steep climb.

“Not since 9/11 have we seen this level of impact on our business,” says Brett Ames, district president with SEMA Construction, Denver, Colo., a full-service construction firm that operates 1,000 pieces of equipment. “These recent fuel price increases impact more than just what we are pumping into the equipment.” 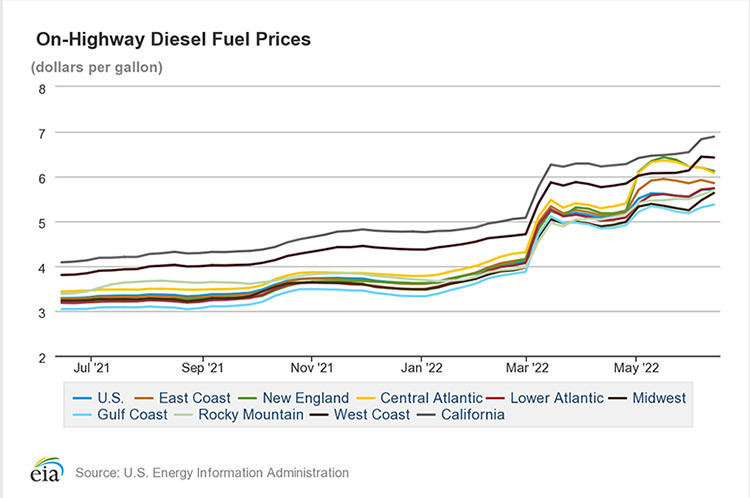 Where you operate matters

The price of diesel fuel was $2.40/gallon two years ago and started increasing in March of last year. Then in March of this year prices shot straight up for 2 weeks (due in part to Russia’s war in Ukraine and the response via sanctions, according to GasBuddy), before leveling off briefly and then beginning another steep climb.

And the situation is likely to get worse. While the construction industry celebrated the passage of the $1.2 trillion infrastructure package last November, most of that money has yet to be spent. With too many dollars already chasing too few goods and driving up inflation, what will happen when 50 states and countless municipalities all start projects and try to buy materials, hire workers, and fuel equipment?