The typical sounds of the World of Concrete filled the air of the Diamond Lot at the Las Vegas Convention Center as the pounding and whining of metal handheld tools on concrete enveloped visitors.

The main difference from shows past was the amount of tools that didn’t require power cords. Major tool manufacturers used the January show to demonstrate their latest advancements in battery technology for handheld concrete tools, able to achieve as much or more power than their corded counterparts.

And the level of tool capabilities continues to increase, with everything from concrete saws and drills to battery-powered jackhammers. Companies are also rolling out battery-powered vacuums and water tanks for handling dust while using their battery-powered tools.

Contractors can now in many cases run jobsites without electrical cords, reducing tripping, electrocution and fire hazards and also making for much smoother and maneuverable work spaces.

Should a power overload occur, in many cases an electrician has to come out to fix it, causing downtime, he explains. Power cords can get run over by scissor lifts and other equipment causing them to break. Cords should be also hung up overhead rather than lying on the ground to prevent workers from tripping over them.

“You're spending a whole lot of time and energy and money just to set that site up with temporary corded power,” Gregory says. “So what's happening is guys have gotten so used to running without a cord, they just don't even want to fight them anymore.”

The driver behind the cord cutting comes in advanced lithium-ion battery packs with longer run periods and shorter recharging times. The powerful batteries range from 8 to 80 volts, depending on the manufacturer, the type of tool and the task at hand.

Not only do the batteries pack the needed power to slice, drill and break concrete, but they are more compact, weigh less and provide cooling technology to increase run time.

DeWalt was demonstrating its new 60-volt battery-powered chippers to add to its lineup of cordless hammers, drills and other tools. The tools can be connected to DeWalt’s battery-powered vacuum, and when the tool trigger is pulled, the vacuum automatically starts removing dust.

“The dedicated chippers, we’ve never had anything like that in the 60-volt line, and that's really our commitment to pursuing the cordless jobsite,” said Jake Sullivan, director of channel marketing for Black & Decker, DeWalt’s parent company. “So now you have your cordless chipper, your cordless hammers, your cordless vac. You could really do most applications as a cordless function.”

“Five years ago, we weren’t doing this,” he adds. “It’s been a fun show so far to show off a lot of this stuff. Guys have been clamoring for these demolition tools that we’ve never been able to have before.”

So here’s a look at some of the latest battery offerings for handheld tools shown at this year’s World of Concrete to help contractors on the way, or those considering the leap, to a cordless jobsite:

At the heart of Bosch’s cordless advancement is the new Core18V battery system, which has ushered in the ProFactor lineup of power tools. The battery technology features Bosch’s CoolPack 2.0, which reduces heat that can sap battery power and allows the tools to draw more current from the battery, the company says.

ProFactor tools also feature BiTurbo brushless motors and drivetrains that use powerful magnets and in-tool electronics for increased power. The batteries come in 8- and 12-amp-hour versions.

The Core18V offers a single power platform, eliminating the need for multiple battery packs. The company says its Hell-ion Turbo Charger can get a battery up and running to 50% charge in 15 minutes for an 8 Ah battery, and 22 minutes for a 12 Ah battery.

The new battery system works on the company’s older tool models yet is specifically designed to increase the performance in an 18-volt platform for its high-powered hammers, grinders, high-impact torque wrenches and drills. The battery also runs dust-extraction vacuums for the tools.

DeWalt has also been advancing battery technology, as it prepares to launch its 60V Max Cordless chipping hammers in 15- and 22-pound models. The company says they are ideal for highway jobs, delivering 10.5 to 19.4 joules of impact energy, depending on the model.

DeWalt has a fast-charging option that can a charge a 20-volt battery in 30 minutes and can charge four batteries at the same time, Sullivan says. The charging is simultaneous for each battery, instead of one at a time. Charging and runtimes for the 60-volt chipper were not yet available.

Hilti rolled out its new 22-volt cordless battery platform, Nuron, for light-duty drilling to heavy concrete breaking. In all, the company is launching more than 60 tools with the Nuron release, including jackhammers, angle grinders and large combi-hammers.

The company says all its battery packs and chargers work interchangeably under a single system and have double the power of current 22-volt tools. “The redesigned battery interface ensures higher performance and longer operating times by allowing a significantly higher power transfer,” the company says.

The Nuron batteries store tool data, such as usage, charging location and battery health, and then send it to the cloud automatically during every charge. The information is available on mobile phone, tablet or computer and sends alerts if immediate action is needed.

The Nuron batteries are designed to be more durable, with fiberglass-reinforced housing and external shock-absorbing bumpers. The electronics are fully sealed to protect against moisture, dust and other jobsite contaminants, the company says.

Hilti says orders are being taken now, and shipments of its Nuron products will begin in March. The product rollout will occur throughout 2022.

Husqvarna Construction Products has launched a range of batteries for its power tools and dust extractors through its 36-volt i-Series system.

The new DE 110i dust extractor has a space for an extra battery. At full power, the battery vac runs for about 20 minutes, but power can be reduced for longer run time. The additional battery option also extends runtime, according to Mark Michaels, director of product management.

The company also offers a battery-powered 3-gallon WT 15i water tank for power cutters, drills and any of the smaller equipment that uses water for lubrication. It also has a hose attachment you can clean equipment with.

Other products running on the i-Series batteries include the DM540i drill. The lightweight handheld drill and can be linked to the company’s battery-powered dust extractor or water tank. Michaels says that with a 3-inch bit the drill can cut three holes 8 inches deep through concrete on one charge. He adds that the battery can be fully recharged in 45 minutes, and up to 80% in 30 to 35 minutes. The drill package comes with two batteries and a charger.

“With two batteries you can keep up with any job you have,” he says.

Husqvarna has also recently released its PACE battery system to provide a battery-powered alternative to a gas-powered cutter.

XGT is the company’s newest advancement for the cordless jobsite, designed for high-powered tasks that typically required power cords, gas or air pressure. The base battery in the system is 40 volts and it can be combined with another 40-volt battery to achieve 80 volts with Makita’s brushless motor. Makita says the 80-volt option rivals corded and gas tools.

Charge times for a 40-volt XGT battery are 28 minutes for the 2.5 AH model, 45 minutes for the 4 Ah and 50 minutes for the 5 Ah. The Makita DC40RA rapid charger can also charge the company’s 18-volt LXT batteries, designed to handle most standard tasks.

The company says the new MX Fuel Breaker MXF368-1XC is the lightest in its class and produces the least vibrations. It uses an MX Fuel RedLithium XC406 battery and a PowerState Brushless Motor. It produces 50 foot-pounds of impact energy. The battery recharges in 90 minutes.

Other MX Fuel tools include the Handheld Core Drill that cores up to 6-inch holes in reinforced concrete as an alternative to gas-powered saws, and a 14-inch cut-off saw that on one charge can cut 6 feet of concrete or make 72 cuts in No. 5 rebar. The cut-off saw also produces half as much noise as a gas-powered one, reduces vibration and eliminates emissions for working indoors, the company says.

Milwaukee Tool says it MX Fuel system also outproduces the tools’ gas or power-cord counterparts. The company says it will continue to improve and expand its battery-powered systems.

“The future of the jobsite is cordless,” the company declares. 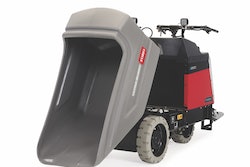 Toro Goes Electric with Ultra Buggy at World of Concrete 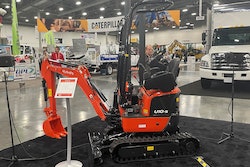 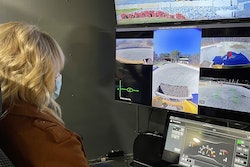