The Programmable Wheel Loader: How the Caterpillar 938K transforms from pile puncher to finesse machine with a few taps

Have you ever operated a wheel loader that was perfect in some applications, but less than ideal in others? Imagine if you could simply program the machine to operate one way in the morning, then just tap out a few choices on the in-cab monitor and have it react with a completely different feel that afternoon.

That was the goal behind the development of the Caterpillar 938K wheel loader. Scott Britton, product application specialist, likes to refer to this capability as changing the “personality” of the machine.

Choose how it feels

When the K series 938 wheel loaders were introduced in 2012 the loader drivetrain operated with a feel between a traditional hydrostatic drive and a powershift transmission. Cat engineers continued to work to make the loader even more refined based on customer feedback. In early 2014 they offered an in cab programmable choice between a hystat operating mode or a mode that gave the machine the same feel and response as a torque converter model.

These changes are made in software rather than steel, which opens up a wide range of opportunities.

Even though the machine is hydrostatic, meaning there was no torque converter mediating power between the engine and the driveline, the default mode was “torque converter” because that’s the “feeling” most wheel loader operators are familiar with.

But hystat loaders are known for their aggressive digging and direction changes with dynamic braking capable of holding the machine on a hill by simply taking your foot off the accelerator. “It’s good for a lot of repetitive cycles, truck loading in a V-pattern,” Britton says. To get the 938K to act like a hystat you simply change your choice on the in-cab monitor. Changes can even be made on the fly, with the loader in motion.

The next evolution Caterpillar’s software developers added to the 938K wheel loader’s computer system was an “ice” mode for snow plowing applications. “This allows you to get off the throttle and not have that heavy, dynamic braking effect in low traction

situations,” Britton says. It lengthens and modulates directional shifts, allowing the machine to roll through slow downs and pick up speed a little smoother when there is ice underfoot. Britton adds that this mode is only for ice, or near-zero traction conditions and not for slippery muddy conditions are when operating with studded tires or chains.

A software update for the 938K, which debuted this fall, added the ability to change the implement response rate limits. These include the bucket lift response rate and the bucket tilt response rate. If you want the bucket to lift or tilt slowly or lift and tilt aggressively you use the monitors scroll keys and adjust the choice on the screen.

“If you need absolutely finite control of that implement valve, where you really need it to be spot on, you adjust the implement response rate to standard, medium or fast,” Britton says. “You can put that feel right back in the operator’s hands where it needs to be for different types of applications.”

In digging, loading or grading applications, you can tune it to be aggressive. If you’re picking and placing construction materials, pallets or unstable loads like scrap cars with a forklift attachment, dial it back to a low response rate or use the fine mode adjustment that allows for finer modulation of the joystick as well s the output to the lift arms .

Another addition to the modes built into the latest software will give the machine a torque converter feel relative to pile engagement, Britton says. “Torque converter machines have a natural feel when you stick the bucket in the pile—it will roll itself back. We have programmed that feel into our hydrostatic transmission and get improved pile engagement when operating in TC mode.”

Caterpillar originally launched the 938K hydrostats with a computer system that required a dealer technician to come out and reprogram the various modes and options for you. As of late last year, however, they have configured the system to be operator programmed through the in-cab monitor. And all these changes are backward compatible with the first 938K.

What makes the programmable hydraulic response and hystat drive in the 938K revolutionary is that all these changes are made with software flashes. “There have been no physical, mechanical changes to the pump structure or the hydrostatic system itself,” Britton says. These changes are made in software rather than steel, which opens up a wide range of opportunities.

All these new features are customer driven, the idea for the ice mode came from customers pushing snow in the winter but running landscape or construction crews in the summer, Britton says. Rather than have customers buy one wheel loader for snow plowing and another wheel loader for pile work and dirt moving, programmable software enables customers to do both with one machine and no compromises or tradeoffs in performance on any application. 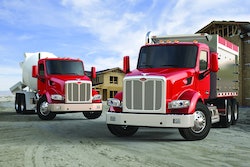 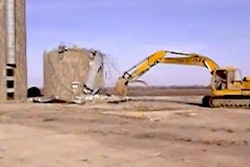 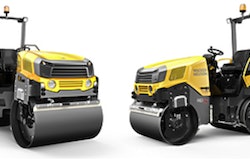