Bryan Force had it all set up. His dad David saw to it that he would have a good job at the local power plant as soon as he graduated from high school. And having worked there for decades, his dad knew all the ropes. Bryan had taken all the tests, met all the requirements and applied for the job. A steady paycheck was right around the corner.

But Bryan had his own ideas. On his 18th birthday he got his commercial driver’s license and went to work driving water trucks for a gas well services company. When he found about Bryan’s decision, his dad left him a scorching voice mail – a recording Bryan saved for several years to remind himself of the cost of going his own way.

After a year of driving for someone else Bryan took a rough business plan to a local bank to see if he could get a loan. The bank told him to come back with a revised plan. Bryan did – the next day – and was turned down again, but the loan officer made some suggestions. His third attempt met the same fate, but on the fourth day, with a much improved plan, he hit paydirt.

“Before, the only business I’d ever had with that bank was to get a loan for my four-wheeler,” Bryan says. “That loan officer went out on a limb for me.”

Never turn down a job

With that truck Bryan never turned down a job, often spending three or four days on the road, sleeping in the truck when necessary. One-hundred hour weeks were the norm. He handled the billing out of his bedroom in his parents’ house until his mother Susan grew alarmed at the size of the checks she was finding strewn about and pitched in to help with the bookkeeping.

Bryan soon saw that there was more opportunity than one truck and one driver could fill, so he bought another truck and talked brother Chris into driving for him. Chris enrolled in college after high school but drove the trucks every chance he could get.

The jobs and the checks kept coming, but now that he had payments to make Bryan was treading on thin margins. “At one point I remember telling Chris to be careful with the tires, because we didn’t have money for new ones. If we blew a tire, we’d be out of business,” Bryan says.

Fortunately, the brothers’ work ethic soon pushed the cash flow into the positive range. Oil and gas companies were discovering record amounts of natural gas buried deep in the Marcellus shale deposits in Pennsylvania and needed all the subs they could get. The business continued to grow and Bryan continued to add trucks. His once skeptical dad even took early retirement from the power company and went to work for Bryan running the fabrication shop where they custom build their trucks.

Never one to sit still, Bryan noticed that his trucks often sat idle, waiting on the drilling company’s dozers to pull them to well sites that are too rough or boggy for trucks. And a sitting truck makes no money.

So Bryan decided to see what kind of help he could get at Cleveland Brothers, the local Caterpillar dealership. “I was 20 years old. I had $150,000 in loans and I was asking for a $140,000 dozer,” Bryan says. “That’s when Cat Financial and Cleveland Brothers stepped in and went to bat for me.”

Ron Hess at Cleveland Brothers remembers the meeting. “This kid had everything together. He knew where he wanted to go. I told my guys, ‘I don’t know what it is, but there is something about this guy.’” Bryan soon had his own D5, the first of many dozers he would buy from the dealer, and much better control of his schedule.

It wouldn’t be the last time someone sized up the young man and decided he had the right stuff. “They really don’t let anything stand in their way,” says John Ehrig, a salesman at Groff Tractor who has sold him three milling machines. “They’re not afraid to tackle anything.”

Massive drilling rigs and the equipment to support them are hauled to the sites on dozens of tractor trailer loads. These do considerable damage to small rural roads. But drilling companies want to drill, not repave roads, and Bryan quickly figured that out.

He started simply, just filling potholes, but soon acquired milling machines and pavers. Neither Bryan nor Chris had ever run a paver or milling machine, but says Bryan, “We just got the machines and figured it out. I learned how to run every single one of these so I could teach the others.” Bryan ran the company paving division himself for five years and then hired someone with 20 years of experience to take the reins so he could concentrate on growing other parts of the company.

Force Inc. acquired mobile rock crushing and screening equipment and used it on various drill sites to provide the aggregates. But Bryan could also see that this part of the business was also ripe for growth. To do so he formed a partnership with a friend, Chris Evans, and named it Kinkead Aggregates (www.kinkeadaggregates.com.)

In 2005 Force Inc. pushed into the $5-million annual revenues range but Bryan felt like the structure of the company was holding him back. “The first five years were a huge learning experience,” Bryan says. “But I didn’t know what my operating margins were and I didn’t know how to get to the next level. I had 25 employees, but I was micromanaging everything.”

Chris finished his associates degree in business management and came back into the company full time in 2005, but there was still more to do than the two of them could accomplish in a day. So, for a considerable amount of money, Bryan did something rare for a young contractor. He hired a consultant.

IPA management consultants (www.ipa-c.com) spent a month with the company analyzing its processes and culture and making recommendations on how to change. Bryan says being shown where he was wrong and being told what to do by a complete stranger was the most agonizing experience in his life, but he swallowed his pride and followed the advice.

“It was tough but it was necessary, and they guaranteed that within one month they would have us moving in the direction we needed to go,” Bryan says.

Force Inc. had been using QuickBooks Pro Contractor for accounting. The consultant convinced Bryan he needed not just an accounting tool, but a business management tool. “Pro Contractor made taxes easier but it was not what we needed to make the company more efficient,” he says.

In addition to restructuring the company’s finances and organization, the consultant convinced Bryan he had to hire more supervisors and put them in the right places. “Relinquishing control was the hardest part,” Bryan admits. But as a result of the financial restructuring and the delegation of authority, over the next five years the company’s revenues tripled and the number of employees swelled to more than 80.

From the beginning Bryan’s basic strategy has been to start each new division of the company in response to a customer need and then, as he says, “blow it up,” to the most efficient size the market will bear. This “get-big-quick” philosophy suits the brothers’ style well, and with the reorganization in 2005 has catapulted the company into the $15-million range in 2010.

This year the continuing boom in gas well development has the company on track to earn $20 to $25 million and grow to more than 120 employees.

One of the consequences of running a successful company is that some of the people you hire eventually figure out what makes you successful and will try and replicate that success themselves. Bryan estimates that a dozen or so employees have left Force Inc. in the last few years and started various types of construction companies on their own. But he doesn’t hold a grudge and seems proud of the fact that almost all of them have succeeded. Indiana, Pennsylvania, is a small town and he runs into these former employees from time to time and is friends with all. Bryan sees their success as a validation of his philosophy.

“Despite the recession,” Bryan says, “there is still opportunity out there. You just have to have the guts and the drive to go out and claim it.” EW

Force Inc. could not have grown from zero to $15 million in 10 years without good workers, and Bryan and Chris have a simple formula when it comes to new hires. When they need expertise, they hire experts, but most of the time they want young people with minimal experience. “We make them into what we need,” Bryan says. “The essential ingredient is a good work ethic.”

And the right work ethic and a willingness to learn new tasks can quickly move somebody up the ladder at Force Inc. “We have a lot of supervisors who are under 30 years old,” Bryan says. The pace of the work and need for workers who can think on their feet and solve problems quickly weeds out slackers and the people who just want a paycheck.

For potential supervisors, training for the next level up typically involves shadowing Bryan or Chris or one of their supervisors. If they’re bright and inquisitive they’ll pick it up fast, Bryan says. If not, no amount of book knowledge or formal instruction can convey all that needs to be done.

This side-by-side training also shows the future supervisors how Bryan and Chris expect customers and fellow employees to be treated. “This ensures when you are dealing with my management staff you are getting treated as well as if I was handling it myself,” Bryan says.

The oil and gas exploration business is the major leagues and Bryan knows his company has to perform at a major league standard in order to win bids. That includes safety standards. One way he has done that it to enroll the company in something called ISNetworld (www.isnetworld.com).

This worldwide organization collects and verifies safety, procurement, quality and regulatory information from some 30,000 contractors and suppliers. Petroleum, drilling and pipeline companies, and government contracting agencies view this information and use it to help them make decisions about subcontractors.

Bryan also has a policy whereby when one customer asks for a safety-related item or procedure on one jobsite then Force Inc. will institute that item or policy across the board for all customers and jobsites. When a drilling company recently asked company employees to wear flame retardant clothing on its drill sites, Bryan made flame retardant clothing mandatory on all the drill sites his crews serviced.

Matt Keith is the company safety coordinator and oversees the administration of all aspects of the training. The company has monthly safety committee meetings and weekly tailgate meetings for the crews. Employees are routinely enrolled in OSHA training classes, and the company also participates in SafeLandUSA, (www.safelandusa.org) a safety testing, training and accreditation program for the oil and gas industry

Bryan also takes safety incident reporting seriously. Everybody from entry level laborers on up has equal authority to shut down a job if they think something is unsafe. A safety bonus is paid each month to each crew that goes without a reportable incident. But to prevent workers from covering up incidents to make the bonus, the company makes it clear that failure to report an incident will result in an immediate firing. 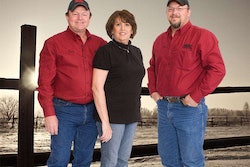 Contractor of the Year 2009: Larry and Linda Davis and Scott Matlock