After Bell Equipment’s announcement about its re-entry into the North American market with a line up of articulated haulers, including the largest-in-the-market 50-ton at the Bauma trade show in Munich, Equipment World sat down with Neville Paynter, Bell NA’s managing director, for further details on his company’s model.

The decision comes at the end of Bell’s marketing agreement with John Deere Construction Equipment, which branded Bell’s artics as their own from 1998 until their agreement ended last fall, according to Paynter, who says the decision to end the agreement was completely amicable.

“With their E Series, Deere decided to manufacture their own machines, giving us an opportunity to re-enter North America,” Paynter said. Deere still maintains its ownership share in South Africa-based Bell Equipment Group, which distributes Deere products in Africa.

Bell Equipment North America, headquartered in Charlotte, North Carolina, will oversee dealer training, parts and service, and presently has a $3 million parts inventory, Paynter says. “We’ll be bringing 60 trucks in during the next three months, and we have dealer orders for 22.”

Distribution of truck imports will be headed by Bell Trucks America, formed with executives from Four Seasons Equipment, Houston, Texas. “They know both us and the market well, since their people used to sell Bell trucks before the Deere agreement, and the company has been a distributor of Terex artics in the meantime,” Paynter says.

Four Seasons signed as the company’s first U.S. dealer, representing Bell in Texas, Louisiana and North Dakota. “We also have active negotiations with dealers in California, Florida and North Carolina,” he says.

“The most important thing is to recognize the opportunity we have and to be sure the support is in place,” Paynter says. “We have no grand ideas that we’re going to have 30 dealers in a year.”

Paynter calls Bell’s B50D flagship truck a “tried and proven truck. It’s been in our other markets for eight years and our customers are reporting great reliability and productivity. We’re excited about this challenge, and the fact we don’t have any current factory holds on our machines.” 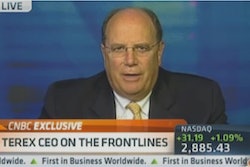