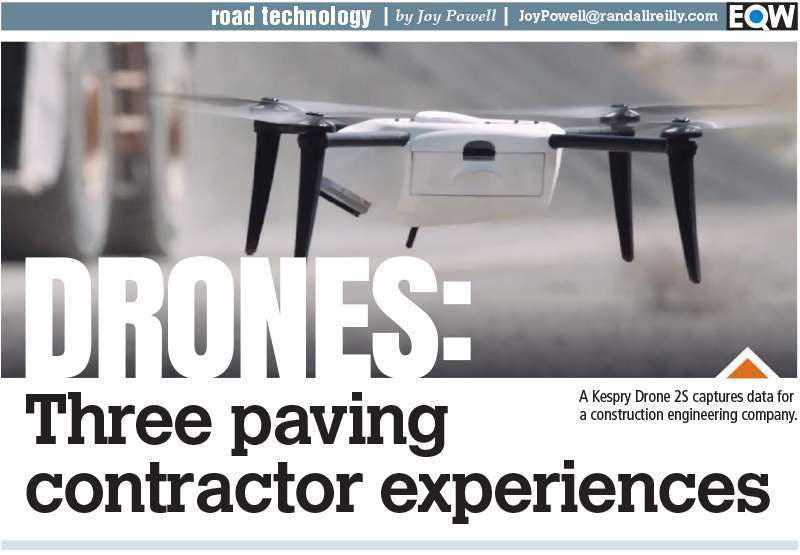 In the commercial paving space, drones are taking off.

And not just for marketing, says Ryan Anderson, owner of Premier Sealcoating and Line Striping in Oxford, Massachusetts. His company uses three drones for measuring, mapping and calculating layouts, as well as paving commercial parking lots and roads.

Drones have boosted his company’s productivity in the two years since he began using them, with faster measurements and projects completed sooner.

“It’s a great technology,” says Ryan. “We bought it to help us with marketing and realized, ‘Wow, there’s so much more we can use this for.’”

Anderson uses mapping apps in his tablet that work on the same platform as the drones. Rather than walking around to measure an area, he sends the drone up. On his tablet screen, he sees the image obtained by the drone. He pushes points to put pins around the area to be measured and then gets a calculation of the square footage.

It’s easy to get the size, layout, pictures and videos to show his crew before heading out. “They know what to expect when they get there,” he says. “When you’re an owner and can’t be on every job, it’s nice to know that everybody’s on the same page before they get to the job.”

Before drones, the manual process of sending someone on site to measure an entire parking lot could take all day. With drones, a contractor can document the entire lot in about 15 to 30 minutes, Anderson says.

“Now, if we go to a big condo facility where there’s 70-some buildings, and they either need paving or sealcoating done, you have to find the general area of paving within that facility. Where before, one other guy and I would have to walk around with wheels all day, measuring, now I drive to the middle of the facility. I take my drone and put it on the roof of my truck,” he says. He sits in his truck while the drone does the work.

“I fly it up a couple hundred feet, take a picture, go home and sit at my computer and do the rest.”

“Now I have all these property managers calling, saying, ‘We’ve seen the pictures, and we know you’re capable of handling work like this,” Anderson says.

In one case, Anderson used his drone to take pictures before, during and after line striping. Chalk lines followed the plan, yet in the drone pictures he could see they were off. He called the engineer, who realized he’d made an error and had Anderson correct it. That prevented the need to black out the mistake on new pavement.

Customers want to know their facilities’ condition, and they want data and to run analytics so they can understand where they should be spending their money, Anderson says. “There’s really no better way to get this information so quickly with this quality we’re able to get. We’ve never been able to do it before.”

Because drones are used for measuring stockpiles and job progress, he can see usefulness in road work. He’s meeting with municipal officials about the prospect of drones flying over townships to assess the condition of pavement.

Another early adapter is Austin Rabine, general manager of Rabine Paving America, which uses drones to create pavement assessments and budgets for commercial, industrial and retail clients. Clients include national retailers such as Walmart, Lowe’s and Home Depot, as well as real-estate investment trusts and property management companies.

Once the drone captures hundreds or thousands of images, Betterview and other companies like it can stitch them into an orthomosaic map with high-resolution imagery showing the layout of a parking lot. Zooming in is possible to see more detail, as well as measuring distances and dimensions for quotes.

“The biggest thing for us is just how much more efficiently we’re able to get information in front of our pavement and stormwater engineers,” Rabine says. “Geography is not an issue. It could be Canada, Mexico, New York or California. I can get the same information on those sites in a few days; whereas before, it may have taken weeks to gather less information.”

Previously, it could cost $2,000 to $4,000 to get somebody out to a property, and that would be based on whether he could get the right experts on site taking photos, measuring the parking lot. “It was based on how many engineers you had and how many sites the client had,” Rabine says.

His firm recently finished paving work for 40 or so distribution centers for a big-box retail chain. Using drones, he provided pavement assessments, “and that only took us a few weeks on about 40 of their sites, where in the past, it could take close to a year to get all that information just because of all the travel involved, the cost, getting all the information back to the office.”

The clients with whom he works could be a team of three or four people based in Atlanta or San Diego, for example, and manage thousands of properties nationwide. Often, those clients have never seen the properties they manage, Rabine says.

“In the past, we’ve been our clients’ experts out in the field,” says Rabine. “We’ve sent project managers or engineers out to look at their facilities and assess them to help them build budgets. But with the use of the drone technology over the past two years, we dispatch drones, and they fly the site for us. It’s much cheaper, and we’re able to get information back a lot quicker.”

“Over the past 18 months, we’ve been using drones a lot,” Rabine says. The pace of his company’s drone use quickened in 2017 with more than 700 drone flights and assessments by early November and another 300 expected by year’s end.

Using drones has transformed the speed in which his company works. In the past, Rabine Paving America would send subject-matter experts to walk sites, and when they spotted an issue, they’d photograph it from the ground.

“We wouldn’t really see the full picture of what’s going on in the facility. But with drones, depending on the project size, we get anywhere from a few hundred to a few thousand photos of the entire site, and they’re all mapped out on Google maps so that you can see exactly where those photos are taken,” Rabine says.

“Then, our team in the office and our pavement engineers go through photos, and that’s how we assess their facilities now – rather than sending anybody out on site.”

Using drones in his business was a learning process from the start; fine-tuning continues.

“Now that we’ve got a good process around it, we’re serving our clients better and faster than ever before, and they’re loving it,” Rabine says. With momentum picking up, his company will focus more on this as an added service.

“Until satellite images get a lot clearer and cheaper, this is going to take over the industry as far as property assessments go,” he says.

PLM Paving and Concrete in Pewaukee, Wisconsin, uses its drone for marketing, for volumetric calculations, for quoting excavations and for figuring how much trucking they’ll need as they remove piles, says PLM’s Jon Elliott.

Earlier this year, PLM used its drone to determine the square footage of a gravel parking lot that was going to be paved and couldn’t be found on Google Earth, says Elliott, an FAA certified commercial drone operator.

“It helps us in accuracy of measurements on some things that are tougher to measure from the ground,” he says. “I don’t know how to lay that out into cost savings – it’s just more about having better, more accurate information.” 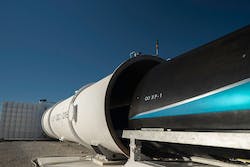 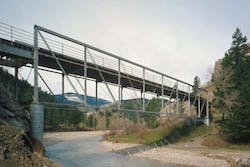 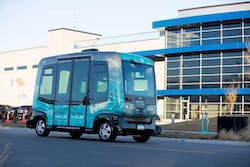