The proposal is dubbed the IMPROVE Act, also known as “Improving Manufacturing, Public Roads and Opportunities for a Vibrant Economy.”

“Under the conservative fiscal leadership of the general assembly and this administration, state government is smaller, $500 million in recurring costs have been cut out of the state’s operating budget, and together we’ve cut taxes by $270 million annually,” Haslam says. “Because we are a smaller, less tax reliant state government, it is time to build on the vision of what the future of Tennessee looks like and requires. This proposal is the next step in the conversation about how we’re going to position the state to address expected growth, maintain Tennessee’s economic momentum and remain competitive as we continue recruiting high quality jobs.” 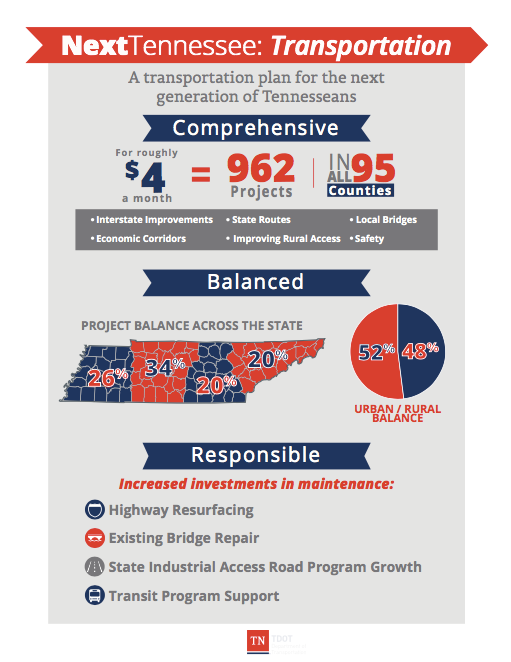 The legislation would also add a 3 percent charge on rental cars and change the state’s open container law to allow the Tennessee Department of Transportation “flexibility to use $18 million in existing federal dollars on roads.” The plan calls for indexed fuel taxes tied to the Consumer Price Index “in order to keep up with the rate of inflation.”

These changes would account for an estimated $278 million for state projects, but impact the “average Tennessee motorist” by about $4 per month.

“All funds would go toward transportation, including the 2 percent typically reverted to the General Fund, to provide funding for 962 projects across all 95 counties, plus an additional $39 million to cities and $78 million to counties. The legislation would also allow municipalities, only if approved by local voters through referendum, to impose a surcharge on their sales tax rate that would be solely dedicated to public transit projects.”

The IMPROVE Act would also drop the sales tax on groceries to 4.5 percent from 4 percent. The proposal also allows companies to go to a “single weighted sales factor” as a way of making franchise and excise tax on manufacturing business “more competitive.” It would also cut the Hall income tax 1.5 percent in 2017 and 1.5 percent in 2018. These three cuts would combined cut taxes by $270 million per year.

“We’ve lowered the cost of government and experienced revenue growth so we’re lowering the cost of food and bringing business taxes on manufacturers more in line with our neighbors,” Haslam adds. “At the same time we have to ensure we have a transportation network that is not only highly ranked but also debt-free, just like it was given to us. Together these proposed tax cuts and investments will move the state forward and position the next Tennessee for continued growth, prosperity and opportunity for our children and grandchildren.”

Haslam also says his FY 2017-2018 budget proposal would use surplus one-time funds to finish repaying the Highway Fund by transferring $120 million from the General Fund.