A technology transfer program administered by the American Association of State Highway & Transportation Officials (AASHTO) is helping state departments of transportation expedite review of potentially promising new pavement and bridge technologies prior to acceptance or rejection as specifications. 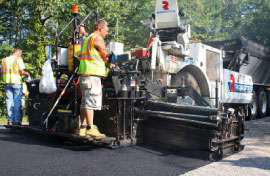 The standard state agency process for material acceptance requires that a technology product first be placed in a field trial, with its performance judged over a period of time, perhaps years.

To address the glacial pace of adoption of new technology by state agencies, AASHTO launched the Transportation System Preservation Technical Services Program (TSP∙2). Shortly thereafter, in May 2006, the National Center for Pavement Preservation (NCPP) at Michigan State University was contracted to develop and administer the TSP•2 program. It serves as a clearinghouse for information on preservation measures that enhance highway performance and extend useful life.

The regional partnerships are key to advancing pavement preservation nationwide and permit members to share technologies and resources in depth with each other. It’s through this partnership technology transfer that states can observe field tests by an agency in the same region, determine whether to test the technology itself, or even specify the technology based on another state’s findings, which saves time and money.

The Program at Work

In one example of the program in action, TSP•2’s regional pavement preservation partnerships were instrumental in getting a new asphalt modifier demonstrated in a number of states, permitting the agencies to use an advanced-technology material in a greatly condensed period of time.

In this instance, an initial field demonstration of a new high-performance asphalt modifier was originally undertaken by the New Hampshire Department of Transportation under the aegis of the Northeast Pavement Preservation Partnership (NEPPP). That led to the Vermont Agency of Transportation’s placing the material based on what it saw via the NEPPP/New Hampshire experience, and then to the Minnesota DOT – a member of the Midwestern Pavement Preservation Partnership (MPPP) – placing based on what it learned from the NEPPP. 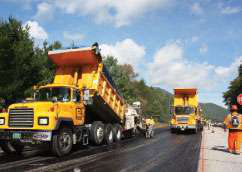 In New Hampshire, a thin-lift, hot-asphalt overlay on U.S. 202 in Rochester, N.H., was placed by Continental Paving of Londonderry. The 1-inch asphalt overlay on a 2.4-mile section of highway incorporated a highly polymer-modified liquid asphalt binder, and was the centerpiece of a NEPPP demonstration project within the TSP•2 program.

The HiMA-modified mix adhered to regional specifications developed by NEPPP. Called Superpave 9.5mm Highly Polymer-Modified Thin Overlay Specifications (PMTOL), the mix is designed as a pavement preservation strategy to extend a pavement’s service life without improving its structural capacity. It is intended to be placed on pavements in good condition that do not require structural rehabilitation.

The HiMA binder contained 7.5 percent SBS (styrene-butadiene-styrene) polymer, more than twice as much used in conventional polymer-modified binders. While it’s common industry knowledge that modification of liquid asphalt binders with polymers improves resistance to rutting and raveling of asphalt mixes, there is a practical limit to polymer concentration. Usually, as polymer concentration exceeds three percent, the viscosity of the binder increases such that the mix becomes more difficult to produce in the plant and less workable for the paving crew.

However, the polymer used in the demonstration was Kraton D0243, a new SBS product manufactured by Houston-based Kraton Performance Polymers, which meets the requirements of the new regional specifications without increasing viscosity.

As Vermont shares the same climate and topography as its neighbor New Hampshire, it was keen to try out the new NEPPP demonstration thin lift technology within its borders.

There, within the context of a larger paving project, Pike Industries placed a 2-mile section of thin hot-asphalt overlay containing the highly polymer-modified asphalt binder on U.S. 7 near Danby. Vermont installed the HiMA-modified mix as part of the NEPPP series of field demonstration tests.

“For example, if we can get the same durability and same installation cost per square yard from a 1-inch-thick HiMA-modified overlay that we’re getting from a conventional 1 1/2-inch overlay, then we’re using less material and saving money over the life of the pavement,” Fowler says. “And if it’s a mill-and-fill operation, then we don’t have to mill off as much existing pavement, which gives us further savings.”

Fowler pointed out that he had learned of the HiMA field demonstrations project through VTrans’ role as one of 14 state transportation agencies belonging to NEPPP.

States beyond the NEPPP territory learned of the field demos through memberships in the sister regional groups. Two of these, MnDOT, a member of the Midwestern Pavement Preservation Partnership, and Oregon DOT, a member of the Rocky Mountain West Pavement Preservation Partnership (RMWPPP), decided to incorporate HiMA in sections of their regular maintenance overlay contracts.

Minnesota DOT looked at HiMA to see if it could fight reflection cracking. “The 12.5-millimeter Superpave mix we’ve been using for our mill-and-fill operations has done a good job of reducing thermal cracking, but we need a way to reduce reflection cracks,” says Jerry Geib, P.E., MnDOT research operations engineer.

There, the HiMA was used on a trial section on Minnesota Trunk Hwy. 100, substituting HiMA binder for the regular PG 64-28 binder.

The HiMA binder for the MnDOT test was produced by Midwest Industrial Asphalt of Onalaska, Wis., a major supplier of conventional and polymer-modified bitumen products. In addition, MTE Services, a sister company, supported Midwest Asphalt’s operation to produce the proper blending of D0243 polymer with the selected liquid asphalt binder.

For the trial, Hardrives Inc., of Rogers, Minn., employed a Wirtgen W200 cold planer to mill off existing pavement, a Cat AP-1055D paver to install the HiMA overlay, and two rollers operating in vibratory mode, a Dynapac steel drum breakdown roller and a Hamm HD+140 tandem finish roller. According to Geib, the paving crew said there was no difference between handling HiMA mix and MNDOT’s usual 12.5mm Superpave mix. v