Correctly running recycled asphalt shingles (RAS) and reclaimed asphalt pavement (RAP) at the same time can be a tricky business. The main economic advantage to doing so, of course, is that you replace expensive virgin binder with less expensive recycled materials. But if you try to run too much RAS and RAP, you may not get good mixing, and problems can develop. 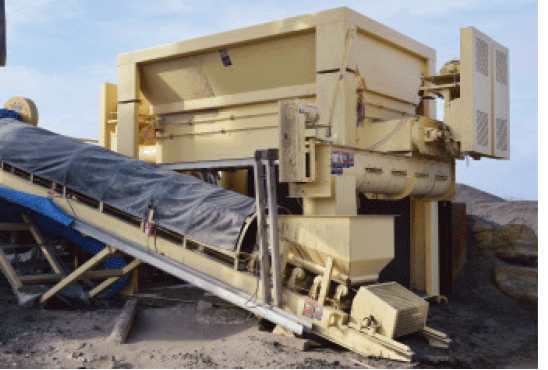 More experienced contractors do not usually run the maximum allowable percentages of RAS and RAP. They find the mix designs that they can run consistently well and efficiently. If a state allows 5 to 7 percent RAS, they run 3 to 5 percent.

The ideal way to introduce RAP and RAS to the mixture is to introduce the shingles earlier than the RAP, says Malcolm Swanson, president of Astec Inc. That way, the stiffer asphalt in the shingles gets the benefit of the higher temperatures in the superheated aggregate before it encounters the RAP.

“Not a lot of plants are equipped that way, however,” Swanson says. “So in many cases, you’re going to end up introducing the RAP and shingles together.” 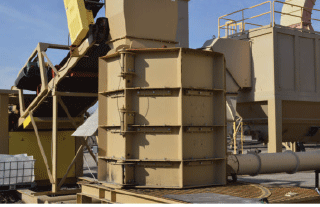 Ideker located and bought this shingle grinder to grind the material to 1/10-inch minus. The company is working to increase its production.

In a counterflow plant, that will occur at the RAP collar. Or, as Swanson points out, the Astec Double Barrel plant has a mixing chamber that permits the RAP and RAS to mix with the superheated aggregate in an inert, non-oxidizing environment. “Pretty much everybody in the industry, even our competitors, acknowledges that the Double Barrel is a recycling beast,” he says.

A typical state specification calls for RAS to be ground to 3/8-inch minus. But Ideker Construction Co., in St. Joseph, Missouri, located and bought a shingle grinder that will produce RAS ground to 1/10-inch minus. The fine grind will produce more effective liquid binder to coat the aggregates, says Jack Neel, asphalt division manager at Ideker.

“Chances are that 3/8-inch chip is not getting completely melted down to be 100-percent effective oil,” Neel says. “The PG grade of those shingles is extremely high. It takes a lot of heat to melt them down. It’s much like sticking a frozen pie in the oven versus a tater tot.”

Neel says shingles ground to 3/8-inch minus have little chunks of binder that don’t get completely melted in the asphalt plant. The outside layer of the little chunks heats up and melts and leaves a particle of oil inside. And if you leave that particle in the asphalt mixture in a silo, or in a truck, for an extended time, the remaining little particle will continue to melt. That, Neel says, will change the volumetrics of your mixture. You’ll get a higher percentage of effective binder and a lower air voids content.

Ideker’s Quality Control Manager David Wilson concurs, and says he has learned at asphalt industry conferences that the effective binder content in 3/8-inch RAS is time-sensitive. On a paving project with an hour-long haul, asphalt samples with 3/8-inch RAS taken close to the plant turned out to match the mix design properly. The mix would test at, say, 4 percent air voids, as planned. “But when they took samples from the far end of a project, by the time they got back to the lab, the mix was cold,” Wilson says. “So they had to put it in the oven and heat it back to compaction temperature, and they were finding that the extra time and heat in the oven was giving them a larger amount of effective oil. At the higher temperature, they found that they were getting 2, or 2.5 percent air voids, because the extra oil was melting.

“We have found that it’s in our best interest to do a finer grind, which is a little bit harder to handle at the plant,” Wilson says. “You cannot just run it through a cold-feed bin.” The tinier particles of RAS will tend to block up in a cold-feed bin and not feed properly. And if the one-tenth size particles are exposed to the wind on a weigh-belt, some of the RAS might blow away.

Ideker has found the way to handle one-tenth-size RAS particles is to use specially designed weigh depletion bins. The company has two ALmix dual-drum asphalt plants located in the greater Kansas City area. One plant has been equipped with a special RAS bin, designed by Astec, that has a load cell in it. As RAS is fed out to the plant, the load cell weighs the remaining material.

In turn, the plant controls receive a stream of information, in real time, telling the plant how much RAS is going into the mix. Control software is designed to treat the RAS as the primary source of binder. And the controls, in turn, increase or decrease the amount of virgin binder needed to make up the difference between the mix design and the RAS binder content.

With Ideker’s new weigh depletion system, if a blockage occurs, the new software automatically knows that it’s feeding less RAS in, and the software will speed up the AC pump to enter more virgin asphalt. “So that way, we always keep our AC binder as close to accurate as possible,” Neel says. “The other nice thing about the fine grind shingles is that you get a more homogeneous mix.”

The other Ideker asphalt plant is equipped with a weigh depletion RAS bin designed and sold by Hi-Tech Solutions, Inc. That bin has a different design than the Astec bin, but the result is the same. The plant treats the RAS as the primary source of asphalt cement and adds virgin binder as needed in real time.

Ideker enters the finely ground RAS into a chute between the drying drum and the mixing drum. “That way, your oil products are not exposed to any burner, but since they’re ground up fine enough, the heat of the virgin aggregates helps melt that fine shingle, and they get mixed in the mixing drum,” Neel says.

Currently, the Missouri Department of Transportation only allows shingles in mixes that require PG 64-22 binder, Wilson says “But we’re looking to the future, the way the economy is going, and DOTs are looking for ways to save money,” he says. “What’s MoDOT going to do in two, three or four years. Are they going to allow shingles into more Superpave mixes with different binders? And if so, as QC manager, the biggest thing I’m concerned with is making consistent mixes. “If your weigh belts are jumping up and down, your mix is not going to be consistent, and that is the worst thing that can happen, in my opinion.

“So I’m just looking for a plant that runs consistent and true and that way, I can run tests and make small changes to the mix and get it exactly where I want to,” Wilson says. 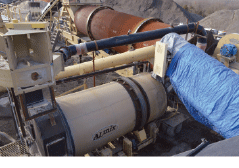 Ideker uses a dual-drum asphalt plant and enters the shingles through a chute between the drying drum and the mixing drum.

Moisture tests in shingles can produce satisfactory results in the laboratory, but the stockpile can still present problems, says Chuck Fuller of Ramming Paving Co. Ltd., Austin, Texas. “If you’re at 7- to 8-percent moisture in the RAS, it can produce a failure in the field,” Fuller says.

“The fundamental problem is that shingles tend to hold a lot of water,” Swanson continues. “And the water can be quite varied within a given quantity of shingles, so it’s kind of hard to keep up with. That means it’s important to keep materials dry. But with shingles, it’s more important because shingles can hold upwards of 20 percent moisture.

“So all of a sudden, you can be putting proportionately a very large amount of water into the system,” Swanson says. “And if you don’t know what that percentage of water is with a fair degree of accuracy, and it all weighs as shingles, then yes, you’re going to throw your binder content off.”

For example, if the shingles contain 5-percent water, a producer will subtract that from the weight of materials that is used to calculate liquid AC content.

“If it’s 5-percent water, then it’s 95-percent liquid asphalt and aggregate,” he says. “So that’s the mass that you calculate your asphalt on.”

Swanson says producers running RAS need to check moistures often in the stockpile. “And more than that, you really need to keep the shingles dry,” he says. “Another problem is that shingles tend to be delivered pretty wet. Most of the contractors are not processing the shingles themselves. They’re buying them pre-processed. And processing the shingles is typically a wet process. The water doesn’t drain out too well. So I don’t know to what degree the shingle processor has control over the amount of water that is residual in the shingles, but that is a factor in the water content of the shingles going into the plant.”

Shingles need to be covered to keep them dry, Swanson says. A cover over the RAS will also provide shade from the hot sun and prevent the RAS from binding together.

Daniel C. Brown is the owner of TechniComm, a firm that specializes in communications for the construction industry.