Behind the Deere-Wacker Neuson Deal: What's Next for the Partners?

There’s been a shift in the construction equipment industry in the last several months as John Deere ended its 30-year partnership with Hitachi and now entered a cooperative agreement with Wacker Neuson for the manufacturing and development of mini and compact excavators for the North American market.

From the CEO on down, leadership from both companies considers the far-reaching benefits of the new agreement a plus.

“We are targeting profitable growth, so a strategic partnership with John Deere makes sense,” said Gert Reichetseder, president and CEO North America at Wacker Neuson. “It’s a win-win situation for both parties."

He notes that the arrangement helps them achieve greater volume in the United States and makes local production of excavators feasible, which has been an ongoing strategy.

“Last, but not least, we can expand our market access for zero emission machines in the Americas region,” the Wacker Neuson CEO said.

From John Deere's perspective, the agreement is almost an immediate advance of the intent to have more technical control of the development of their machines following the end of the more than 30-year joint venture with Hitachi. As part of the closure of that alliance, Hitachi has assumed distribution and support of these products and has established an independent network of dealers. Deere dealers will continue to support their existing field population of Hitachi-branded excavators. In addition, John Deere will continue to source its existing lineup of 0-9- metric-ton excavators from Hitachi until further notice.

“Excavators are an integral part of our customers’ jobsites, and we anticipate growing demand to continue,” said Domenic Ruccolo, senior vice president, sales, marketing and product support, global construction equipment, John Deere. “As we look to the future of our excavator lineup, this agreement will allow us greater flexibility as we continue to deliver a robust product portfolio that prioritizes the operator experience.”

He said the company is excited about the ability to bring productivity-driven features and technology to customers with greater agility.

“With increased design and manufacturing control, John Deere customers will benefit from a differentiated 0-9-metric-ton excavator lineup; one that leverages John Deere technology, optimizes productivity-driven features, prioritizes the user experience, and rapidly brings new, customer-validated innovations to market,” Ruccolo said. “The agreement with Wacker Neuson is another chapter in our excavator journey.”

The competing companies see the agreement helping each strengthen their respective positions in the compact excavator market across the world.

As presented, the new agreement encompasses the North American market with machines being completed at Wacker Neuson’s plants in Menomonee Falls, Wisconsin, and Linz, Austria. Reichetseder said the agreement will have a positive impact on both facilities. He said Wacker Neuson plans to invest an amount in the low double-digit million Euro range to expand production capacities in the United States and Austria.

“For some time, our strategies for the Americas region have included plans to localize excavator assembly in the United States,” he said. “Having said that, we will realign our manufacturing footprint here in Menomonee Falls, still leveraging our existing plant and incorporating excavator capacity.”

While there will be investment into the facilities, Reichetsteder said there is no need for any building expansion in Menomonee Falls. He told the Milwaukee Business Journal of the intent to invest $10 million in the facility to reconfigure assembly lines to produce Deere-branded products and restart a powder-coating facility that has been idle in recent years.

In addition, staffing is expected to nearly double by 2025. Plans have been made to hire 200 employees to assemble products made at the plant.

“Our current footprint enables us to still grow with existing products being made in the Menomonee Falls plant for the Wacker Neuson brand, while localizing excavator production in the U.S. for John Deere and Wacker Neuson in the future,” Reichetsteder said. “Key to this will be localization of component supply and an optimized logistics chain, which will enable us to produce the required quantities, as well as benefit from the related economies of scale.”

Development between John Deere and Wacker Neuson has commenced with an anticipated roll out in coming years.

“After a ramp-up phase, we expect significant contributions to our sales and earnings within the next three to four years,” Reichetseder says. “That’s when the first models are going to begin production.”

Based on the timeline offered by the Wacker CEO, it is possible ConExpo/Con Agg 2026 could be the unveiling of the new models.

Under the new deal, Wacker Neuson will design and build Deere-branded compact excavator models less than 5 metric tons specifically for the North American market. The machines will be distributed under the John Deere brand via Deere’s network of dealers. Wacker Neuson will continue to distribute its models in the same product range.

“The differentiation between the two offerings relates to technical features unique for each respective individual brand,” Reichetseder said. “However, we still want to achieve economies of scale and try to utilize as many synergies as possible between the two brands.”

Each brand will have the same basic machines but different. Wacker Neuson learned some best practices from a previous alliance to produce compact excavators in the 3-ton or less range for Caterpillar at its Linz, Austria plant. That alliance lasted from 2012 to 2018, with negotiations to end the agreement in 2018 initiated by Caterpillar.

Not long after the dissolution of that agreement with Caterpillar, John Deere and Wacker Neuson partnered with a similar agreement in the Asia-Pacific market. For that region, Wacker Neuson is building Deere-branded excavator models from 1.7 to 7.5 tons that are only available in China, Southeast Asia, Australia, and New Zealand.

“These excavators are specifically designed for the Asian-Pacific region and, therefore, differ from the ones which are part of this new agreement,” Reichetseder says. “Under this agreement, we concentrate on mini and compact excavators. There is no further expansion included in the current agreement.”

The North American agreement also covers a technical collaboration between Wacker Neuson and John Deere in relation to 5- to 9-metric-ton excavators.

“John Deere will purchase and incorporate design and technical IP provided by Wacker Neuson to adapt and evolve to our own manufacturing and innovation requirements,” Ruccolo said. “This will allow John Deere to have greater control of the design, manufacturing, and technology innovation, for the 5-9-metric-ton models.”

Per the agreement, the machines developed and produced will be exclusively launched by Johne Deere, while Wacker Neuson continues to independently develop, produce and distribute its own 5-9 metric ton excavators under its own brand.

The two construction equipment manufacturers have had a relationship outside the North American market for many years.

Wacker Neuson has two cooperative agreements with John Deere, one in the agricultural equipment sector regarding the distribution of telescopic handlers and wheel loaders under the Kramer brand and the other, building excavators for the Asian-Pacific market.

“The cooperation in the agriculture sector is not affected by this new agreement and is going to continue as successfully as in the past,” Reichetseder says. “It is important to remember that Kramer is not an OEM supplier to John Deere but sells directly under the Kramer brand to John Deere dealers.”

The Wacker Neuson CEO said the company’s cooperation with Hamm also is not impacted by the new agreement and will continue to serve as a successful pillar for future Wacker Neuson strategy. Reichetseder noted that the prior agreements are substantially different than the latest one with John Deere, under which Wacker Neuson will manufacture excavators that will be sold to John Deere for distribution under their brand name. 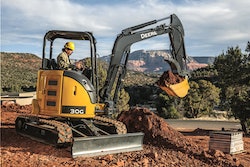 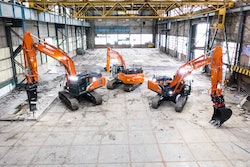