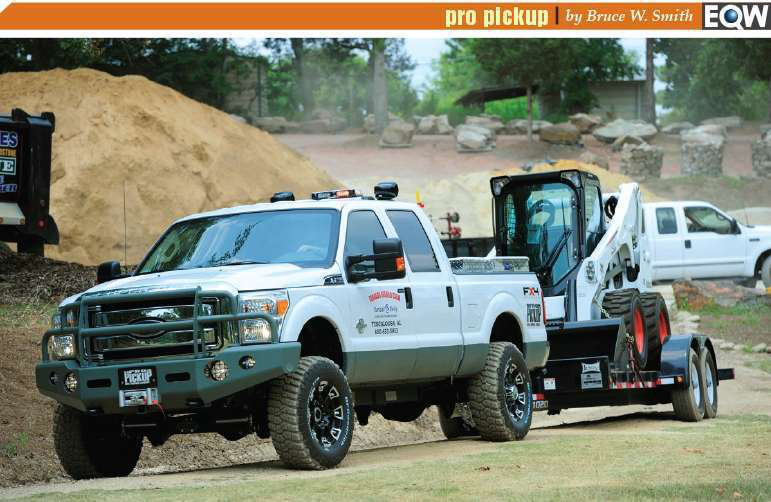 Hauling 55-gallon drums of diesel, a bed full of pit run gravel or pallets of undercarriage parts are an every day occurrence for many pickup drivers who multitask around heavy construction, aggregates, landscaping and other businesses involved in moving dirt, sand and rock.

We use pickups as a tool to haul loads and tow trailers in addition to the ordinary people-moving tasks. They excel at those jobs—to a point.

When the manufacturer’s load limits of the pickup are exceeded is when problems related to handling, drivetrain and suspension arise. That’s when driver safety also becomes an issue.

Overloaded pickups place employees at risk because the vehicle’s handling and braking are significantly affected. That’s why every vehicle manufacturer places payload limits on vehicles including pickups. That limit is the Gross Vehicle Weight Rating (GVWR).

If more passengers are in the truck, their weights have to be subtracted as well, as does the tongue weight of a trailer in-tow. You also have to subtract added accessories like winch, heavy duty bumpers, bigger tires/wheels and so forth.

For most half-ton pickups that cargo capacity is going to be somewhere around 1,200 to 1,500 pounds depending on make and model. Heavy-duty pickups can often double that load capacity, again depending on what the configuration.

So the next time you task your work pickup with a heavy load, think about max cargo capacity and the safety aspects. Just because the front wheels are still on the ground and you feel like all’s well doesn’t mean it is.

As for helper/overload springs, they don’t change a truck’s GVWR or max cargo carrying capacity—they just help level the load and take the sag out of the tail.

Sagging rear ends are a common malady in the world of heavy construction. Just take a look around any big jobsite and you can see pickups, cab chassis service rigs, flatbeds, vans and utility trucks that are dragging tail.

Rear suspensions subjected to the daily grind of carrying heavy loads or towing equipment trailers eventually begin to soften as the added weight takes its toll on the stock springs.

That leads to poor ride and handling, and accelerated wear on other components such as shocks and tires; it’s the domino effect in the service/maintenance cycle.

If your work trucks are suffering from weakened or overburdened rear springs, or you just want them to ride on a more even keel front to rear, side to side, the solution is just a helper spring away.

Helper springs, or, as some erroneously call them, overload springs, are designed to supplement the factory rear suspension. (They are not designed to increase the truck’s official load carrying capacity, a figure set by the truck maker that can’t be changed once it leaves the assembly line.)

Steel helpers are leafs used in conjunction with the factory spring pack; air versions are inflatable rubber bladder placed between the OE springs and the frame. Those made from urethane or rubber act as bump-stops, or are added between OE coils, that compress progressively to help support added weight.

Is one type better than the other? Depends on the application and how much you want to invest in the suspension upgrade.

Bump-stop-style helpers, like those from SumoSprings, are the least expensive in both initial cost and installation time. They are maintenance-free and self-adjusting.

Leaf-style helper springs usually cost a little more and take longer to install, depending on whether they are of single- or multi-leaf design. The usually need to be adjusted to the load and re-adjusted from time to time. Some are noisy when going over uneven terrain, some aren’t.

Air helper springs vary widely in price and installation time depending on the sophistication of the air delivery system. Some can be manually inflated and don’t take much longer to install than some leaf spring kits.

Those that can be adjusted from inside the cab and have a remote air compressor, like Firestone Industrial Products’ Ride Rite system, can take several hours to install and are the most expensive. As with any system using compressed air, maintenance issues can arise if the installation isn’t done properly.

Air-helper springs are overall the best option for those who want to have total control over the truck’s ride, handling and the amount of rear suspension lift as it varies from job to job.

There’s also one hybrid air suspension kit for heavy-duty pickups and cab-chassis models that is considered the best of both worlds by many, and that’s the R4Tech suspension offered through Firestone Industrial Products.

Regardless of the direction you take in helper springs, upgrading your work trucks with them will pay off in the long haul.