Don McLoud
May 20, 2022
The original concrete decks and steel railing for the Keystone Wye Bridges were painstakingly removed and replaced with wood.
Jack Corr

Jack Corr grew up just 10 miles from South Dakota’s most famous bridge, the Keystone Wye, and now he can say he has helped the 53-year-old wooden-arch structure last another 50 years.

His company, Corr Construction Services of Hermosa, won the contract to rehab the landmark bridges on the way to Mount Rushmore on U.S. Highway 16 and 16A that millions of tourists cross each summer. The unique laminated wood structure’s three, 66-foot-tall wooden arches consist of 91-foot-long timber planks glued together over a lower bridge and beneath an upper crossing.

“The Keystone Wye bridges are our most prominent historical structures in the state of South Dakota,” Corr says. “That bridge is on a big picture mural in almost every department of transportation office in the state.”

The concrete decks and steel railings on the bridge, which opened in 1968 between Rapid City and the Black Hills, needed to be replaced. It seemed the perfect project for Corr, which specializes in challenging bridge jobs. It also had personal significance for the company’s owner and his family business.

“This is our home area, and I grew up as a kid just 10 miles from Keystone,” Corr says. “It was a unique project, and it was going to be a historical project. Nobody's probably going to touch those two bridges in any meaningful manner in the next 50 years again.”

But the project would not be a simple one. It would have to be done over the winter and be opened in May in time for tourist season. Because of the difficulty of pouring concrete in South Dakota’s cold climate, the DOT decided to replace the concrete decks and steel rails with wood. The DOT also liked that the wood would enhance the aesthetic appearance of the state’s famous landmark.

Concern remained that demolishing the upper deck, which is about the length of a football field, would damage the wooden arches, the bridges’ signature element. Corr had to develop a detailed demolition plan to present to the DOT for approval. The company also set up a laser monitoring system to ensure that as the weight was released from the bridge the arches were not harmed.

The demolition process, which began in August, was a tedious one. Pieces of concrete structure, 10 feet by 10 feet, were removed one at a time after being saw cut. Crews drilled holes in each panel for lifting pins. An excavator then lifted the panels.

“We pinned each one of those panels that we cut and swung it, spun it around, and then hauled it off with forklifts,” Corr says. “That whole entire upper bridge was all disassembled one piece at a time.”

Another challenge was the cold weather and keeping the water used for the saws and the resulting slurry from freezing, causing a hazard for workers. They found that the best method was to continuously brush out the water and slurry to keep it from freezing, which also added to the demolition time.

The lower bridge deck, which is 50 feet below the upper deck, could be demolished by more conventional methods with hydraulic breakers.

Corr ordered the wood for the bridge decks and railings from Western Wood Structures of Oregon. It’s all Douglas fir cut from the Northwest to match the bridge’s laminated arches and timber. The wood was pretreated and pre-manufactured to specifications, which Corr crews laid and bolted to the decks.

Corr also treated the wooden beams and arches for rot. He noted that they were in excellent condition.

“We drilled some holes in a lot of that wood to do the treatment, but it was all found to be really good quality,” he says. “So after 50 years, that thing is in really great shape.”

The bridges are now almost-all wood structures, with the exception of a thin layer of asphalt on the top of the deck to protect the wood and reduce wear. Corr Construction Services did most all of the work in-house, including installing the wood decking and performing a high-tension retrofit to bring the lower bridge up to modern load standards. That involved installing high-strength fiber material bonded to a wood backer and then glued and bolted to the bottom of the beams to increase their strength.

Despite the challenges, the bridge opened on schedule May 20, just in time for tourist season.

“We are extremely proud of it,” Corr says. “We took on a major challenge … and it went really well.”

Corr performed the work with a six-person crew. The company was formed by Corr in 2003. His wife, Melissa, runs the office. His brother is a superintendent, and his two 22-year-old twin sons also work on the crew. His stepfather was the project engineer and developed the demolition and laser monitoring plan.

The $4.5 million project was a good one for Corr, which typically handles secondary-road bridges in the $1 million to $2 million range. It also came with the added satisfaction of contributing to a structure that has meant so much to the company’s home state.

Corr says it’s the type of project that could be once-in-a-lifetime for the small company. But then again, Corr is always up for another challenge.

“We're definitely one of the smaller bridge contractors in our area, but we take on some big jobs,” he says. “We're good at doing jobs that would seem bigger than we could handle, but we can get it done.”

To watch a cool film of the original construction of the bridge, check out “The Keystone Wye” film with footage by the South Dakota Department of Highways from the late 1960s. 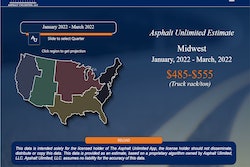 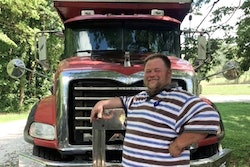 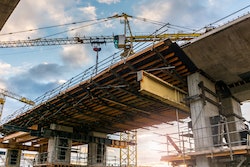 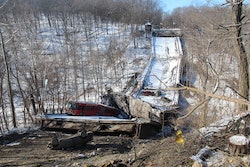