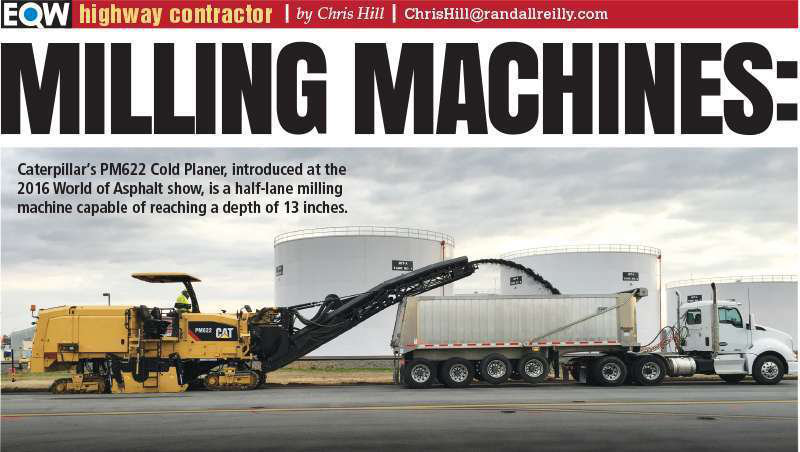 Cold planers or mills are the rough-and-tumble predecessors to the glamour equipment of pavers and rollers, but the work they do is at least as critical, if not more so, to the rideability and smoothness of a finished pavement.

Standard purposes for milling machines are to either remove an existing pavement, restore a surface to a spec’d slope and/or grade to smooth out a pavement surface. Any surface blemishes or irregularities are cleared off and a uniform, albeit textured, surface is the end result.

These machines gobble up old pavement anywhere from a fraction of an inch to several inches deep, depending on the application, whether it is for complete removal or to match a grade requirement. In doing so, they face a high degree of stress and strain, a factor that led to multiple breakdowns of the early versions of these machines in the 1970s. Crews then spent as much time repairing and maintaining these machines than they did operating them.

As the machines developed – and in particular the cutting heads and bits – they became more reliable and long lasting. 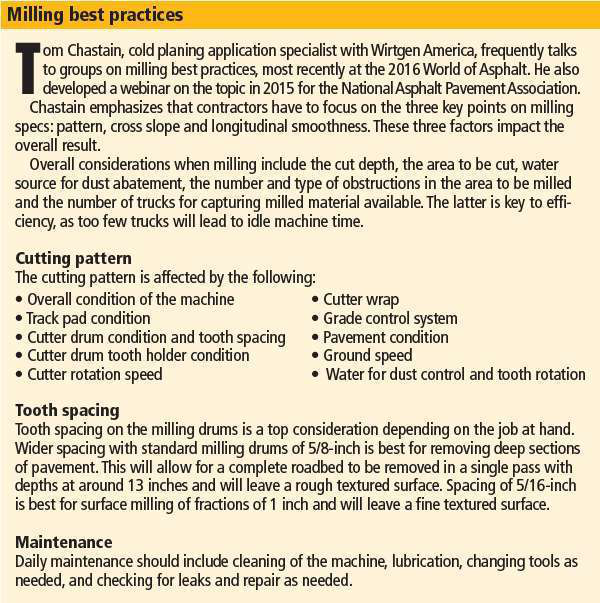 C.J. Rowe, of Rowe Construction Group in LaPorte, Indiana, is one of the early adopters of the Cat PM622, introduced at the 2016 World of Asphalt show. His company specializes in asphalt paving in addition to milling work, a slight departure from the typical milling machine owner who focuses almost solely on milling.

Rowe says he was in the market for a new milling machine because his previous machine wasn’t reliable enough for large jobs, such as a 500,000 square-foot Walmart parking lot he was bidding in Lafayette, Indiana. “With our work load increasing to larger projects, it made it a necessity to purchase a larger, more efficient mill that could put out production,” Rowe says.

Rowe ultimately picked up his PM622 because of his experience with the early model and because he was looking to keep his fleet Caterpillar.

Most of the projects Rowe takes on involve 1.5- to 2-inch milling and overlay replacement, but he has removed 5 to 7 inches of pavement down to base rock for binder and surface applications in heavy-duty sections. The company specializes in large parking lots for big box stores, but also has used the mill on city streets, subdivisions and lengthy driveways.

In one project, Rowe says he used the machine like a reclaimer and milled 10 to 12 inches in place, then mixed 4 inches of asphalt in with 2 to 3 inches of pit-run base.

“We then added some crushed concrete and blended everything together,” he says. “Within five days everything tightened up nicely and we were able to pave without any rutting or deformation to the base.”

That flexibility, of using the mill like a reclaimer, has helped Rowe take on projects that he might not have attempted before.

“Once we milled with the PM622, even if it isn’t the best spot for it and one of our other mills may typically work better, we test the versatility of it.”

Rowe says he typically uses his Dynapac PL500 for cleanup milling around manholes, curb and gutter radii and small road cuts and patches. “We have also used it on some residential projects for transition mills or entire removal,” he says.

“We recently tested the PM622 milling dirt for a charitable community project to put in a walking trail memorial for a young teacher that passed unexpectedly. We milled a quarter-mile-long, 10-foot-wide and conveyored off to the sides to be graded eight hours later. We would have never attempted something like that with a mill before adding the this machine to our fleet. It has opened up many job opportunities since.”

Much like Rowe, New York paving company Suit-Kote has used one of its mills in a non-traditional format. Its Roadtec RX-900e was heavily modified on a recent project involving nearly seven miles of New York highway 243 in the southern part of the state.

“For the highway 243 project, we used the machine to do single unit cold in-place recycling (CIPR),” says Zeke Quinlan, vice president of operations. “We’ve gone with CIPR with high-float emulsion, which helps with coatings and improves wintertime freeze/thaw performance by providing a mat with greater flexibility.”

Suit-Kote worked with Roadtec to modify the frame of the RX-900e by 1.5 feet to improve stability and boost productivity. This adjustment included removing the conveyor in order to discharge the millings with an emulsion binder into a windrow, which is then picked up by a paver and spread as a base layer.

“We made some modifications to fit our needs,” says Quinlan. “Achieving the right weight distribution was a big factor for use, especially with the machine not having a heavy-duty conveyor system.

“Our purpose-designed RX900e saved us time and money on the New York 243. It is more practical than a complete mill-and-fill, plus we’re recycling 100 percent of the milled old roadway and ensuring non-stop paving.”

Having his PM622 since late August, Rowe says his crew has put about 150 hours on it and his crew now uses it on every job they mill. “We are one crew that mills, grades and paves, so we don’t rack the hours up like a typical mill crew. It has been on approximately 15 to 20 job locations.” However, Rowe adds that he has a mill crew in the works for 2017, so the machine may see more use in the near future.

Rowe says a top feature of the PM622, and one that makes sense in context of milling best practices (see sidebar on page 54), is the immediate conveyor speed control and joystick boost.

“When the truck drivers can’t keep a consistent speed with the mill, before you would have to come to a stop or slow down, and it was a constant game of tug-of-war and killed production,” he says.

Now Rrowe says he can push up or down to control the distance and speed at which the millings are thrown from the conveyor. If the truck pulls away before he can get to the push button, he can alternately push the joystick in on the conveyor control and immediately shift the conveyor to max speed. “This prevents grindings being thrown at the back of the truck,” he adds.

Initially Crowe took on his own milling to be in control of his schedule and to keep the ball rolling on business. He feels that if paving contractors were to try out their own mills, they would see the benefit of that control. “Particularly those who have always hired out milling and are starting to get tired of the ever-changing, moving target of schedules that most milling companies put out,” he says.

“This machine’s controls and grade control is very similar to that on the larger Cat pavers like our 1055F,“ Crowe says. “The only feature that took a little learning was the transition mill option. We are now able to start at depth and select whatever distance we want to transition from depth to zero for butt joints or transition milling. Also we are able to start from depth and go to zero over selected distance. Mainfall is also clearly shown on the mill and we have used it in several instances where before we would have to run stringline in tight tolerances where water drainage could have been an issue for our paving crew.”

The flexibility of control is a key feature that helps a contractor such as Rrowe who is actively involved in the day-to-day work.

“The ground controls have been a huge improvement whenever I am not personally operating up top. My lead ground guys are able to help the operator up top with steering, leveling the machine when necessary and even moving the conveyor in any direction,” he says.

“The grade control touch-screen takes a little getting used to instead of using the dials on machines in the past, but once you get proficient, you no longer miss the turn dials for depth control. When we get tight up against a building or any other objects, my ground men are able to remove the grade control box and walk to the back of the machine and still maintain operation.”