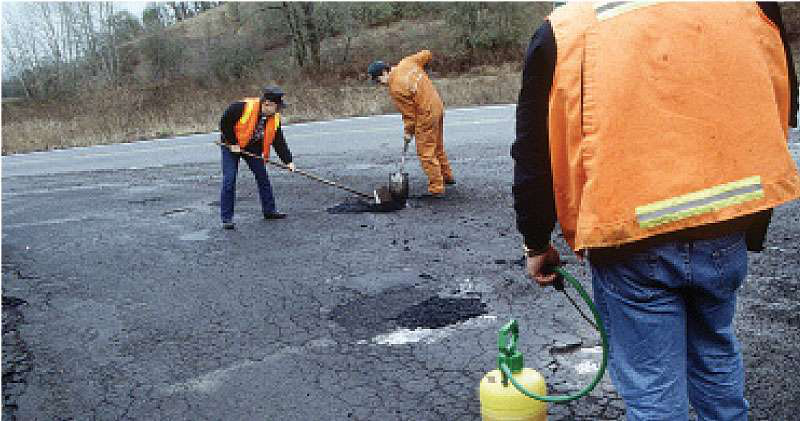 To do something the right way, it helps to know how to do it the wrong way. Pothole patching is not an exception to the rule.

Identifying the various types of distresses and the related failure mechanisms is vital for an in-depth analysis of a pothole problem.

By identifying the mechanisms of failure, it’s then possible to establish a set of performance criteria that can be used to develop improved patching materials, according to Evaluation of Pothole Patching Materials (FHWA NJ 2001-020), a report conducted by the Department of Civil & Environmental Engineering Center for Advanced Infrastructure & Transportation at Rutgers University. The report was done in cooperation with the New Jersey Department of Transportation and the Federal Highway Administration. (A downloadable PDF of the report is available at qprcoldpatch.com/pdf/Rutgers-Study.pdf.)

According to the report, the most common in-service failures in cold-mix patching materials are:

• Shoving: Doing this under traffic reduces the mix’s stability. Improper compaction makes the mix more susceptible to shoving, because proper compaction is required to develop aggregate interlock that is primarily responsible for the stability of the mixture.

• Raveling: This is a progressive loss of aggregate from the surface of the repair. It’s the product of poor aggregate interlock and inadequate cohesion within the mix. Poor compaction can also contribute to raveling as it reduces cohesion.

• Dishing: This results from inadequate compaction, usually occurring when the mix compacts under traffic. The dishing mechanism can be addressed through mixture design and proper compaction.

• Poor skid-resistance: This can result from a flushed or bleeding surface or polished aggregates. It can be controlled with an appropriate mix design.

• Bleeding: This is related to excess of binder in the patching mixture.

• Lack of adhesion to the side or the bottom of the repair. This is a result of poor preparation. It also happens when tack is not used or when the mix is not self-tacking.

Mix It and Stick It

Blend the right patch; make sure it stays

So, how do you mix up the best pothole repair sauce?

“We blend the mix for different seasons and geographic locations,” says Towner Magill, senior sales manager with supplier QPR, who has a background in mix design. “We’ll make the liquid blend different ways based on the climate and region for the material.” Without giving away “the secret sauce” blend, Magill explains that the company adds more or less softener to the mix. “We add more in the winter and less in the summer,” he says. “It all depends on the ambient temperature.”

The chemicals in the cold patch adhere the liquid to the aggregate. “We use a very strong anti-stripping agent that keeps water from intruding between the asphalt binder and the aggregate,” preventing the water from washing the binder from the aggregate, Magill says.

The material’s technology doesn’t require the patch to later be square-cut and laid with hot mix.

But Magill still does not recommend the often-used throw-and-go technique. “We recommend that loose debris be swept out and then the patch material be applied in 2-inch lifts. Each lift should be compacted with a little bit of a crown on top, because as traffic rolls over it, it will continue to compact and will begin to settle.”

Magill adds that to more quickly set up a pothole patch, play sand can be taken and sprinkled over the top of a patch about 1/4-inch thick, and then continue the compaction with anything from an 8-pound hand tamp to a truck tire run back and forth over the patch.

Magill says that while there is a perception that pothole patches are temporary, “a good, high-performance cold patch put in the right way can be a permanent repair.”

Making sure a pothole patch stays put can be easy as blasting a spray can.

“You just sweep out the hole, spray the material and patch the hole,” Donnelly says.

Budget-strapped agencies and municipal public works departments are using the patching aid to increase the effectiveness of potholes that are patched with non-premium patch mixes, he says. “It could still enhance a premium patch mix, “Donnelly notes, “but for a community that might not have big budgets and that has to buy inexpensive patch materials, this will help the material stay put.”