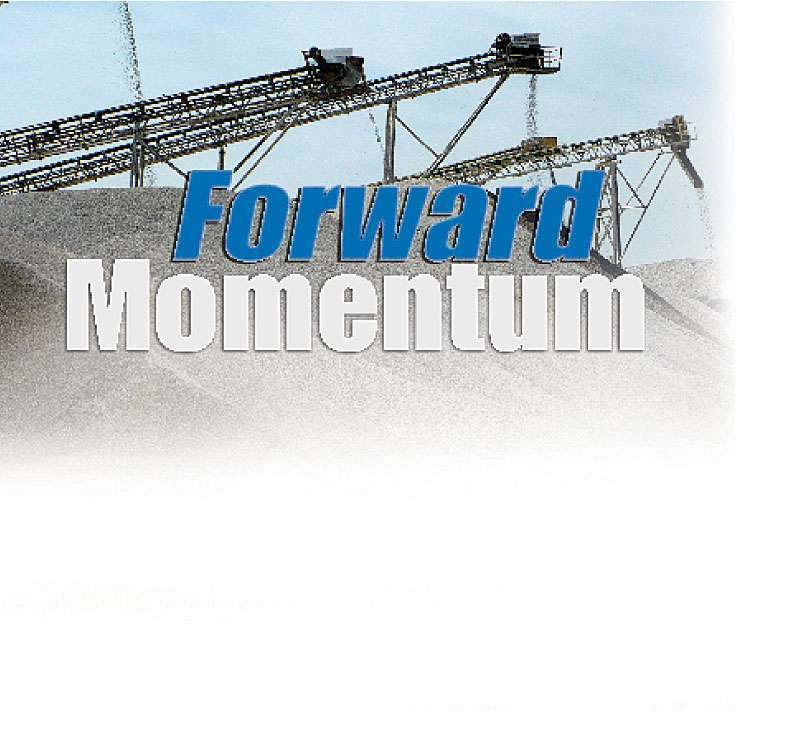 The mass may be smaller and the velocity may be slower than desired, but the rock is rolling in the right direction.

Momentum is sometimes hard to define. In sports, it may be a crucial play that changes the outcome of the game. In business, however, it might be something as simple as a sale that leads to an unexpected customer base. Often, it may seem like a small pebble, but once it starts rolling downhill— gaining mass and velocity along the way — its impact can be significant.

Movement alone, however, is not enough. Just look at the results of our forecast studies 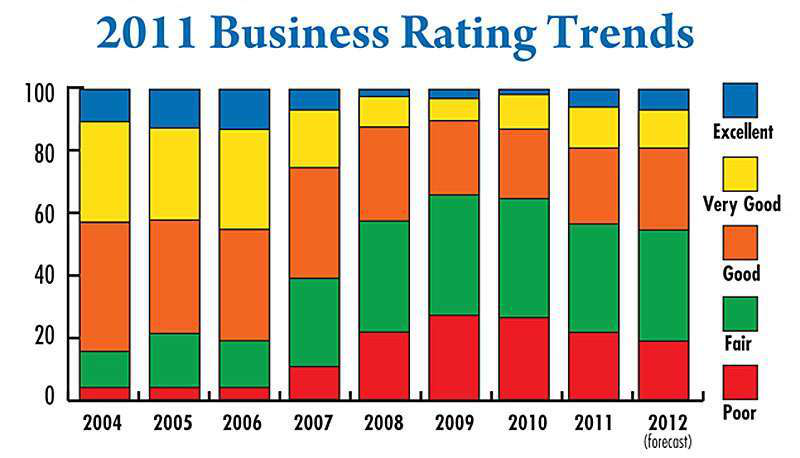 during the last eight years, and it’s clear that not all momentum is good momentum. For example, consider the industry’s historical response to business conditions. When answering our first forecast in 2004, 84.5 percent of respondents indicated positive business results (excellent, very good, or good). For a three-year window between 2008 and 2010, however, those numbers plummeted with an all-time low in 2009 when just one in three respondents (34 percent) reported favorable business ratings.

Those numbers increased slightly in 2010, but 2011 respondents gave the most favorable business ratings (43.4 percent positive) since 2007.

Another favorable indication is the accuracy demonstrated in yearly predictions and the subsequent results. With the exception of those predicting a fair year, responses from last year’s forecast results versus this year’s actual results are all within 5 percent, and most forecast discrepancies erred toward being overly pessimistic. 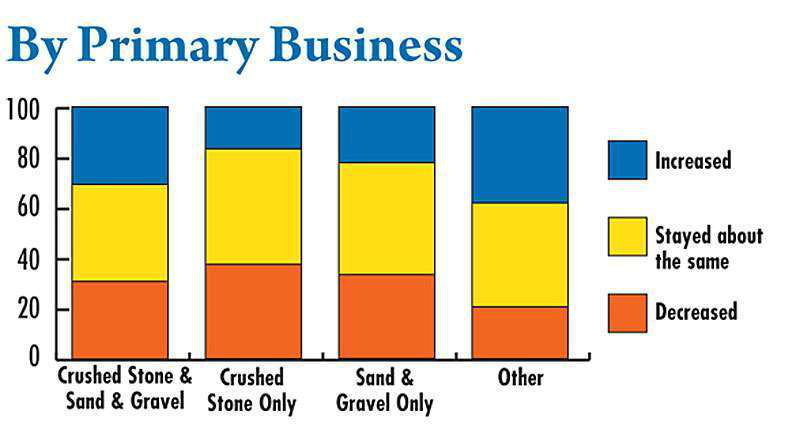 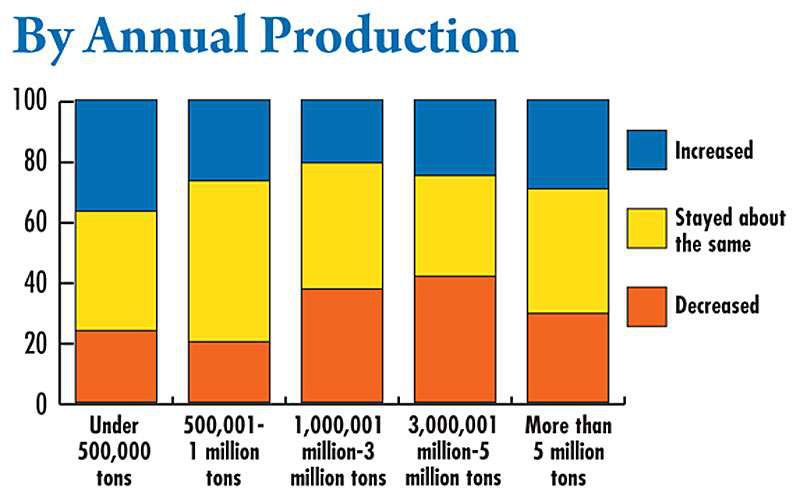 From a regional perspective, producers in the Northeast were the most likely to report positive results with nearly six in 10 (58.3 percent) indicating positive business results in 2011, while approximately two-thirds (67.5 percent) of those in the South reported fair or poor results.

Small producers (under 500,000 tons per year) were the most likely to indicate positive business results, with the level of optimism diminishing in a direct correlation to increasing 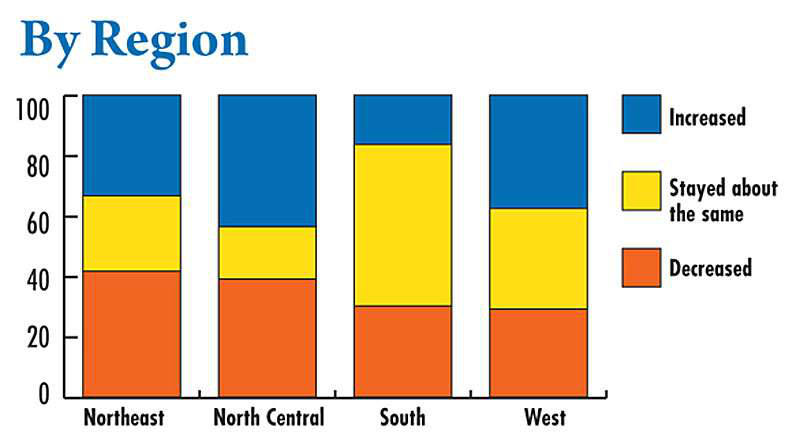 In terms of operators experiencing changes in production quantities throughout 2011, an equal number said they’d increased and decreased production. It’s worth noting that, of those 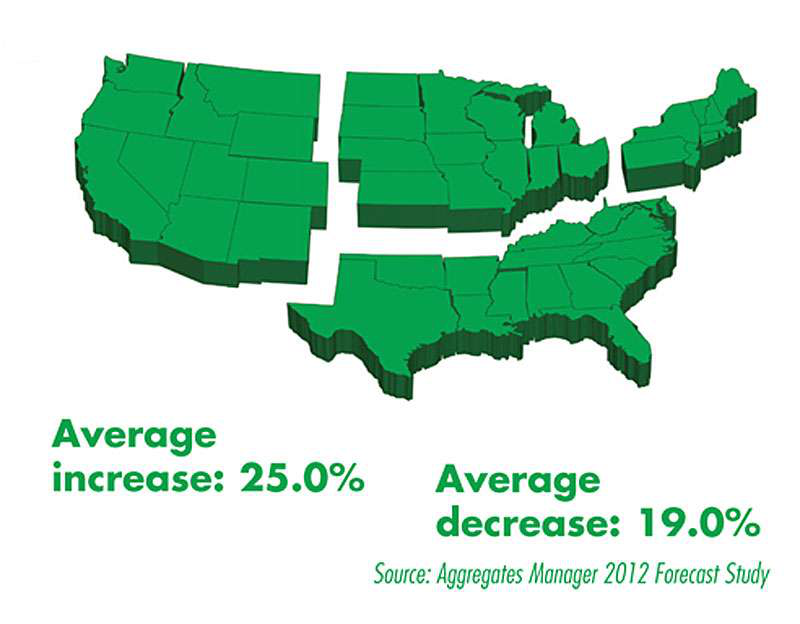 reporting an increase, the average increase was 25 percent higher production. Among those indicating a decrease, the average decrease was 19 percent. The largest gains were had among producers of crushed stone and sand and gravel (30.8 percent reported an increase) and among those in the North Central region (43.5 percent indicated higher production levels).

While gains appear evident within pockets of the industry, several years of inertia are challenging to reverse. Looking forward in 2012, small improvements are being predicted in most categories. Comparing forecast projections from 2012 to those from 2011, 6.6 percent expect an excellent year (+5 percent), 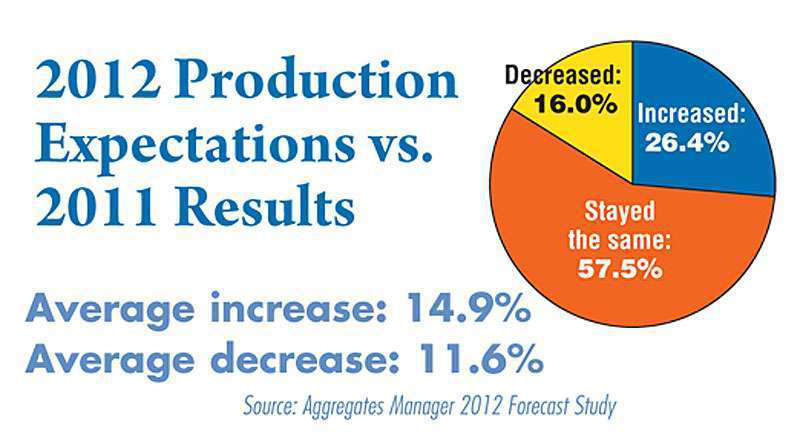 Sand and gravel producers are the most concerned looking forward. Nearly nine in 10 (88.9 percent) expect a fair or poor year in 2012. Those working in the Northeast and North Central regions are the most optimistic with 66.6 and 52.2 percent, respectively, calling for positive business results. In terms of size, small operators are the most hopeful, with 68.4 percent of those 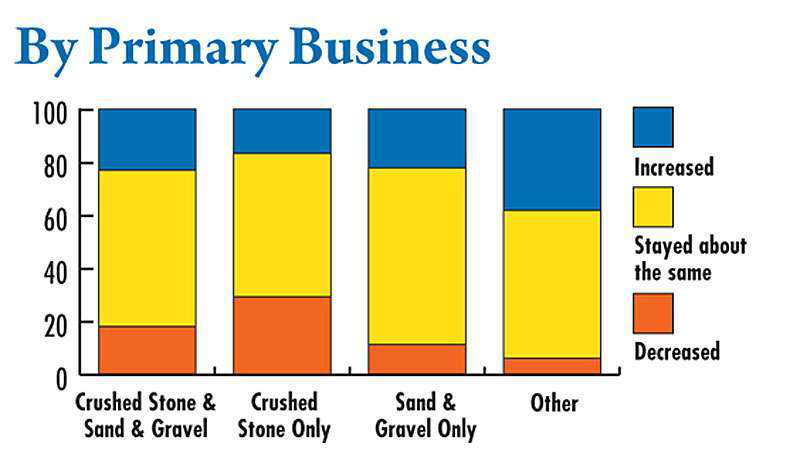 In terms of production quantities, sand and gravel producers are the most upbeat. Twice as many anticipate an increase in production compared to those who expect tonnage to decline.

Consistency is key from a regional perspective. The majority of operators in all four regions expect production quantities to remain about the same. That said, operators in the North Central region were the most optimistic with 34.8 percent anticipating an increase compared 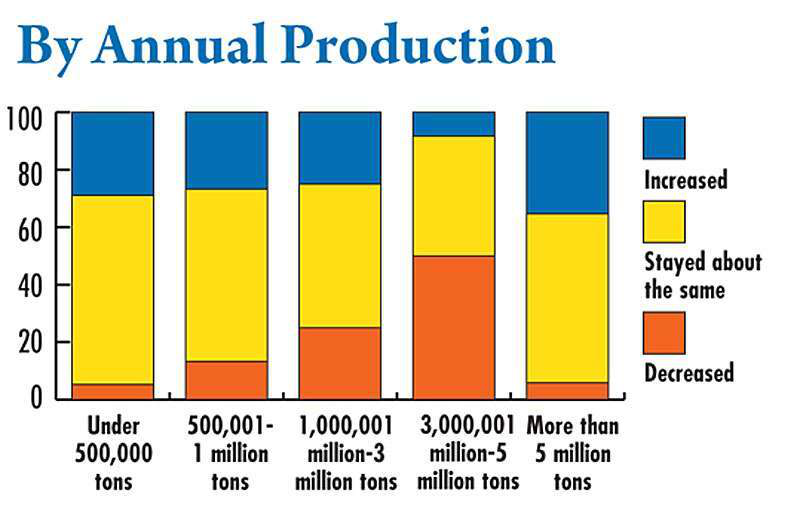 to 13.0 percent calling for a decrease. Producers in the South are still skittish on demand; they were the only region with more respondents anticipating a decline (20.9 percent) than an increase (16.3 percent).

In 2011, employment levels were slightly more stable throughout much of the aggregate industry. Overall, 27.4 percent (9.6 percent fewer than in 2010) of respondents said the work force decreased throughout the year, while 20.8 percent said their work force grew. 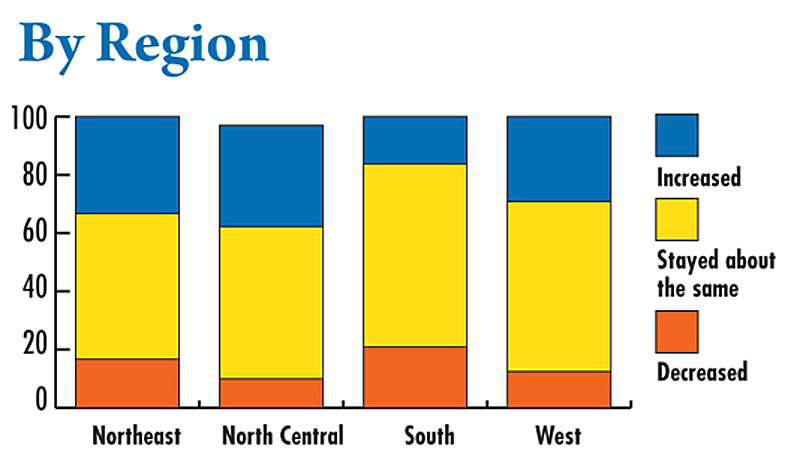 From a regional perspective, the South’s declining production levels were reflected in its staffing; 46.5 percent of operators there reported work force declines. The most growth was seen in the North Central region where 26.1 percent of respondents’ operations grew their numbers. 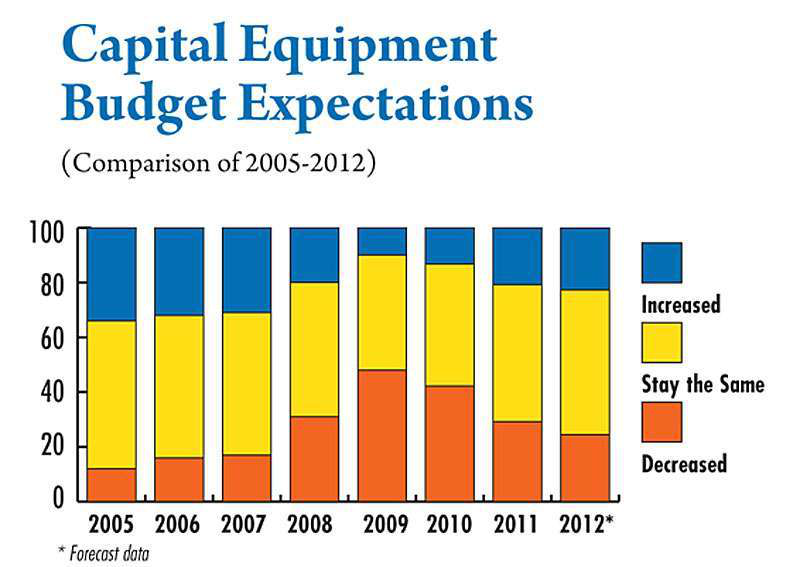 By worker category, other hourly labor was the category to experience both the highest increase (13.2 percent) and the highest decrease (27.4 percent). The number of women in the workplace grew, as it was the only category to report more work force expansion (10.4 percent) than contraction (6.6 percent).

Competition for sales has dominated operator concerns during the last four years. While the number who ranked it as a major concern diminished this year (25.5 percent), nearly 60 percent more called it a minor problem. Taken as a combined total, almost 85 percent noted it as a challenge — 25 percent more than the next most widespread problem.

When asked how they were dealing with this issue, many respondents indicated that they have lowered prices to seal the deal, including break-even pricing. Some vertically integrated operators noted using package deals to streamline costs. Others say they are analyzing markets, implementing long-term strategic planning, and exploring new and growing markets. Customer service, customer contact, and a focus on quality are among the business strategies being employed to maintain customer loyalty.

Other concerns, such as regulatory compliance and aggregates availability, are increasingly important to this year’s respondents, but the dominance of competitive sales indicates that the aggregate industry — while in a better place than recent years — remains intensely focused on each job and each customer.

Improvements may be modest and regional, but they do, indeed, appear to be real. If these results and those forecast for 2012 bear out, then the aggregate industry needs to ensure that objects in motion stay in motion. From there, it’s a matter of increasing mass and velocity.

The objective of the 2012 Aggregates Manager Forecast Survey was to determine business, production volume, spending, and workforce trends. In November 2011, Aggregates Manager e-mailed questionnaires to a random selection of readers in the crushed stone and sand and gravel, crushed stone-only, and sand and gravel-only industries. A total of 106 useable surveys were completed.