Tier 4 Final engines and transmissions with claims of double-digit leaps in fuel economy headlined Intermat, which took place in Paris, France, April 16-21. Selective Catalytic Reduction, or SCR, is the front runner in Tier 4 Final technology, with Mario Gasparri, president, CNH Construction, proclaiming, “We feel we’re ahead of the Tier 4 Final game because we chose SCR early.” The company says it has learned the ins and outs of SCR technology from sister company Iveco’s truck engine experience. 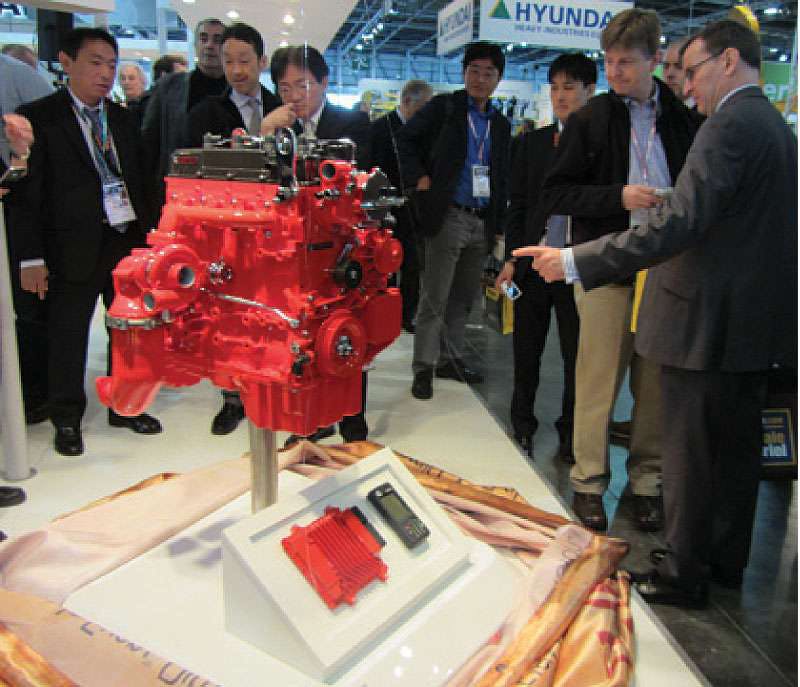 The Tier 4 Final QSF2.8 will be manufactured at Cummins’ new plant in Beijing, China.

With Tier 4 Final SCR engines, manufacturers are now talking about total fluid economy, not just fuel economy, taking into account these engines will need both fuel and diesel emission fluid, or DEF.

When combined with cooled EGR technology, Deere says its Integrated Emissions Control system will use less DEF in its SCR system than alternative Tier 4 Interim solutions. This will result in a smaller DEF tank, extended DEF filter service intervals and reduced operator intervention. “Per gallon, DEF costs just as much as diesel today,” says Doug Laudick, manager of product planning, John Deere Power Systems. “We’re estimating our DEF consumption will be about 1 to 3 percent of diesel consumption.”

Cummins calls the flow-through Compact Catalyst device a “fit and forget” system, requiring no ash-cleaning service, no sensors and no operational lamps in the equipment cab. Remove the catalyst, and the base engine can be used in Tier 3 applications. 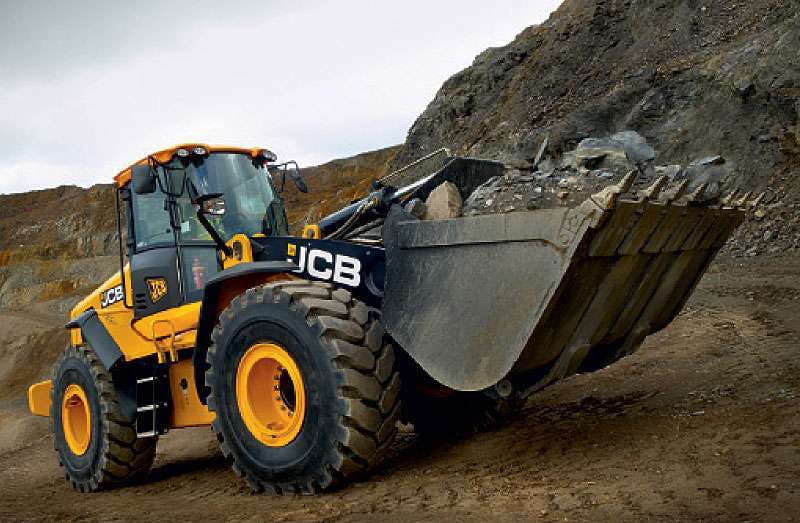 The 427 (pictured) and 437 loaders replace JCB’s 426 and 436 models, and are scheduled to go into production this fall. Powered by a 6.7-liter Cummins QSB engine, the models have automatic front axle diff locks and an optional 5-speed power shift box.

Two exhibitors showcased drivetrain developments they say have the potential for significant fuel savings. The Dana Rexroth HVT R3 hydromechanical variable transmission, currently undergoing field testing, will offer drivetrain fuel savings of up to 20 percent when “compared with the same vehicle outfitted with conventional torque converter transmissions,” Dana says. Designed for front-end loaders, graders and other off-highway applications of up to 360 horsepower, the transmission is the first powersplit system from the 50-50 joint venture between Dana and Bosch Rexroth. At low vehicle speeds, only the hydrostatic circuit of the HVT is used, allowing quick acceleration and braking, low-speed maneuvering and reverse without the need of an additional clutch. At higher speeds, the HVT still uses the hydrostatic path, but a power splitter begins to route engine power through a parallel path that also uses the mechanical elements, allowing acceleration with no interruption in tractive force. Both paths are managed by an electrical control unit. Engine speed is decoupled from drive speed and maintenance costs decrease with the use of hydrostatic breaking.

Intermat visitors also received a sneak peek of Cat’s 966K XE’s powertrain system, which Cat says can deliver up to 25 percent fuel efficiency improvement. A hydraulic variator takes the place of the torque converter for reduced heat generation under severe rimpull load. When the machine is working under heavy loads, Cat says the continuously variable transmission consumes roughly half the energy compared to a conventional transmission.

Volvo is launching more than 60 new products this year, says Pat Olney, president and CEO. Intermat intros included the L45G and L50G wheel loaders. In addition, Olney said Volvo has been “quite satisfied” with the start of its skid steer supply agreement with JCB. “It’s been even better than we expected,” he said. 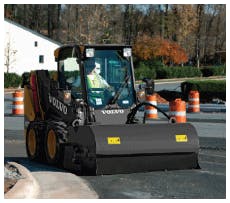 JCB says 2012 will be the “biggest product launch in our history.” To date, 33 new products have been introduced with another 33 scheduled for debut before year end. Show introductions included the 427 and 437 wheel loaders and company’s revamped JS line of excavators, including the JS115 to JS180 range of machines that will feature the JCB 444 Dieselmax for the first time. The company says the engine delivers up to 23 percent more torque, offering faster response time and in the JS160 and JS180 models, operating at up to 10 percent lower rpms. On all models below 24 metric tons, the ROPS will be integral to the cab.

Case Construction Equipment is celebrating its 170th anniversary, saying 90 percent of its products have been “renewed.” The 580N backhoe, introduced at ConExpo, is now an EGR Tier 4 Interim machine. Several Case machines are now being introduced with installed telematics. 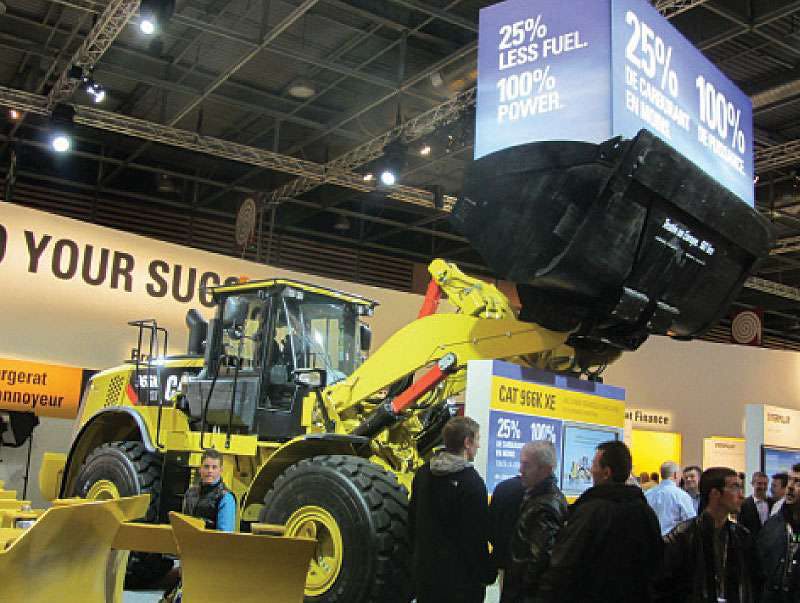 The Cat 966K XE will be introduced in North America during the first half of 2013.

LiuGong’s 922E excavator takes over from the 922D, and improves operating efficiency by 10 percent and reduces fuel consumption by 18 percent, according to the company. The machine’s automatic power boost mode increases digging force by up to 10 percent for 10-second intervals. The heavy lift system lets operators increase hydraulic pressure to build force and reduce hydraulic flow to the attachment, while reducing speed for added control during lifting operations. 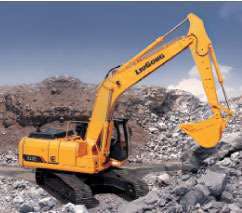 LiuGong used Intermat to intro its newly acquired Dressta dozers and 922E excavator, which features a high-contrast monitor that can be seen in all light conditions. Both machines are made in the company’s Poland plant, which is scheduled to manufacture wheel loaders.

The system of automatic compaction control on BOMAG rollers has been upgraded with Asphalt Manager II (AM II). New features include an easier-to-use operating system with menu control that provides operators with several options for basic applications (e.g. surface layers; binder and base courses). All of the GPS-fitted rollers working a project are connected by a wireless network, allowing individual measuring data (including position, compaction values and asphalt temperature) that is updated every five seconds, to be shared with each other and the site manager. The overall status of the site is recorded in real time.

Goodyear introduced a new range of OTR tires with Hi-Stability technology. The tires can increase load capacity by up to 25 percent and improve stability. More than 30 radials have been developed for machines operating in mines, quarries, construction, ports, recycling and other industries. With equipment manufacturers producing more powerful machines, Goodyear says it developed the tires to match their increased power, speed and torque. The construction of the Hi-Stability tires allows higher inflation pressures. Improved stability and durability come from a reinforced bead structure and carcass, and the tires provide better tread self-cleaning and reduced friction for improved rolling resistance and traction. 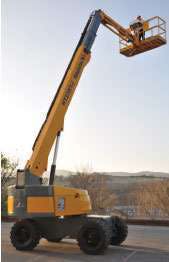 Haulotte previewed its HT23RTJ rough-terrain telescopic boom. The machine will be available in October 2012 in North America. The boom can reach full height in 53 seconds and comes with three steer settings: two-wheel steer, four-wheel steer and crab.

IronPlanet said its online auctions in the United States are attracting an average of about 17,000 potential bidders and online European auctions draw an average of about 6,000. The company also said it had recently completed its largest-ever auction, ringing up $50 million in one week, with 65 percent of the 1,200 items up for bid, all in North America, bringing at least one international bid and 23 percent of the items purchased overseas. The company also plans a repeat of its February live auction in Orlando.

Acquisition of the Dressta dozer line gives LiuGong a parts depot in the Chicago area the company will use for all U.S. distributed products, says David Beatenbough, LiuGong’s vice president of research and development. The company currently has around 17 North American dealers.

Beatenbough says he’s “extremely happy” with the first days of the acquisition from Poland’s HSW. LiuGong is currently working out the lineup of Dressta and LiuGong dealers. North America is a key market for the Dressta dozers, where eight models ranging from 74 to 515 horsepower are sold, Beatenbough says.

Scania and Doosan Infracore have extended their current agreement, with Scania providing an estimated 3,000 engines annually with one engine platform for all emissions levels. Scania currently provides engines for Doosan’s artics and wheel loaders.

Sandvik announced it’s bringing back the Rammer line of breakers, which will be handled, as before, by Allied Construction Products in North America.

Hyundai’s 120-metric-ton R1200-9 excavator has been in field tests in Russia, Southeast Asia and Africa, with the show machine slated to go to Russia. The model has a Cummins QSK23-C 760-horsepower engine and an 8.76-cubic yard budget. The company says it’s seen a growth rate of 65 percent during the past three years, and is building factories in Indonesia, Russia and China. 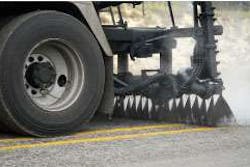 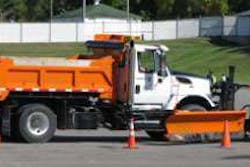 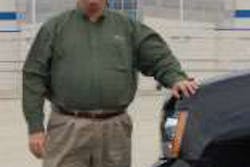 Equipment World Contractor of the Year, 2012 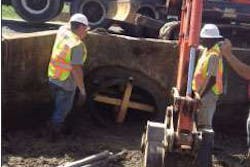