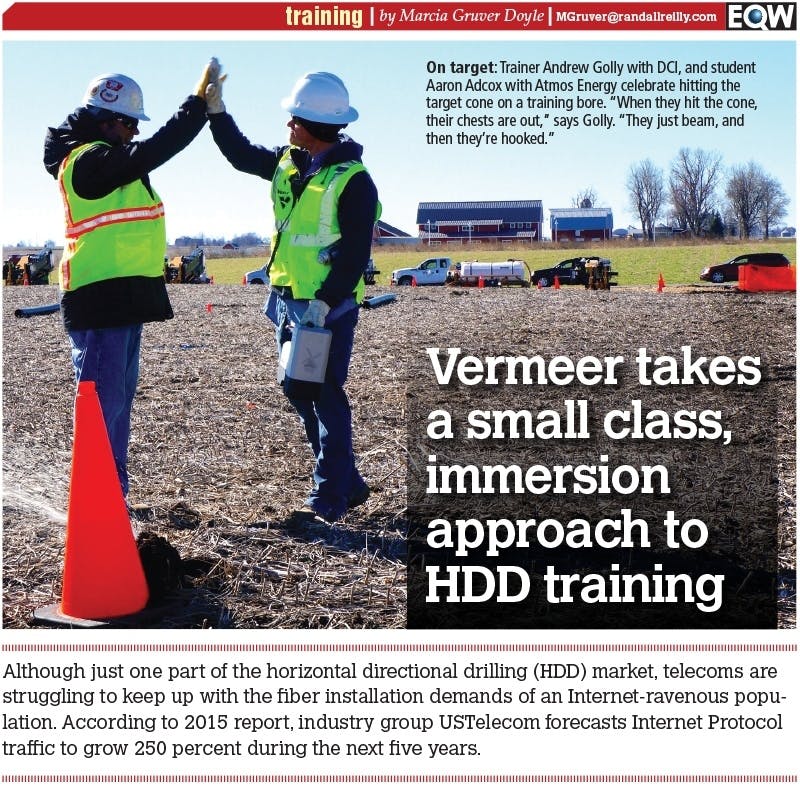 This is not all good news to HDD contractors, who are struggling to man drills in the face of such demands. “Our customers are telling us, ‘we can’t work because we don’t have the people,’” Tony Bokhoven, training manager, Vermeer. And so they’ve asked for help.

In response, Vermeer unveiled its first HDD Circuit training in February, and invited Equipment World to visit its second class in March. The company is betting that contractors will not only pay the $4,000-per-student cost (see sidebar, “HDD Circuit basics” on page 54), but that they’d also be willing to be short on personnel for two full weeks while they trained.

The two weeks were a bare minimum to convey what Vermeer felt needed to be taught, Bokhoven says: “It’s more than just knowing how to flip switches and turn rod. We didn’t just want to teach people how to run a drill. We want to teach them how to be a driller.”

The resulting training course takes a full immersion approach that includes both classroom and field, all of which takes place at Vermeer headquarters in Pella, Iowa. For example, after learning safety and drilling fundamentals, students then travel a short distance to a field to practice what they’ve just learned. Each eight-member class is divided into teams of two, one on the drill and one on the locator. As the training progresses, each team member will put in equal time on each position.

At each day’s end, there’s homework. Instructors give students the parameters of the next morning’s job – bore length, what utilities cross the drill path and where and how deep, and any other obstacles they’ll need to navigate. Using a laminated sheet, each team of two is asked to create a bore plan. “The next day, they’ll drill their bore plan,” Bokhoven says, “and at the end of the day, they will have data logged the bore all the way through and will know how close to their plan they actually were.”

“The laminated bore plan is probably one of the biggest training tools we’ve used,” says Dan Vroom, customer training lead. “Most of them have never used a bore plan; they just figure it out on the job.”

Student T. J. Reed with Atmos Energy verifies this. “I hadn’t done a bore plan before,” he says. “We know what locates we have to cross, but since our bores are short, and we come into an open pit, you can get it done pretty quick.”

While some of the students going through the training were drilling novices, others had been on the job several years. Still others were sent by their firms to become company HDD trainers. 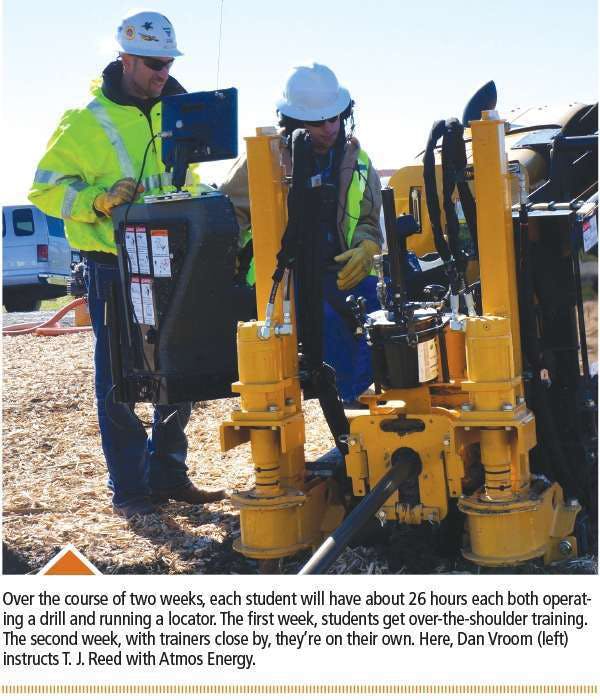 Regardless of the experience students bring to class, there are still gaps in their learning. For student Aaron Adcox, also with Atmos Energy and Reed’s teammate, the drill represented the biggest challenge, simply because he hadn’t drilled before. “T.J. went over the drill controls with me one night and we worked on it for a couple of hours,” Adcox says.

One of the biggest knowledge gaps the trainers have seen with students – both novice and experienced – is understanding pitch. “A lot of guys have a hard time understanding what ‘take 10 percent out of the rod’ means and how that correlates to depth,” Vroom says.

Adcox echoes this. “When they talked about ’10 percent,’ I didn’t understand it. But when they actually drew it out on the plan, you can see the steps.” It’s a lesson Adcox apparently learned well, according to his teammate Reed. “We had a 2-foot box to reach and he put it right in the middle,” Reed says, and then laughs: “Beginner’s luck was all that was.”

Another challenge is locating. “There’s probably more of a learning curve on the locating side than on the drills,” Vroom says. “For example, some students didn’t know a sonde can have two different frequencies. Now they know how to check and change frequencies.”

“The perception is that the guy on the drill runs the show, but they learn that it’s really the guy on the locator that’s driving the bus,” Bokhoven says. Even though the drill operator has a display, the locator is the one who’s seeing the power box at the end of the street, or where the locates are. Students also learn how vital the person running the vacuum excavator is to the process. “He’s the one seeing the obstacles in the bore path, and he’s the first one to see the ground conditions change,” Bokhoven says.

One aspect students seem to pick up more quickly is the equipment. “The particular machine doesn’t throw them off much,” Bokhoven says. “Equipment guys are intuitive about how things work.” The students train on just-off-the-factory-floor Vermeer D20x22 S3 rigs, along with DCI DigiTrak F5 locators. “We have D20x22 Series II drills back home, so these are slightly different, but nothing major,” reports Reed.

OTJ training with a twist

Before leaving for the day, trainees make sure the locator batteries are being charged, the water is fresh, the hoses are curled up, the equipment is washed down and that everything is ready to go to work the next day. “We try to make it as much like a job as possible,” Bokhoven says.

But there’s one key difference: this “jobsite” doesn’t have any production requirements. If a mistake is made, or a lesson can be taught, everything stops while instructions and adjustments are made. “The beauty of it is, they’re allowed to do it wrong,” Bokhoven says, “because that’s how we’re going to teach them. All the tooling they need is at hand, and there’s no danger of a utility strike.”

The setup in Pella gives Vermeer the ability to offer consistent and repeatable training, Bokhoven says. Classroom training takes place in a newly created space in the company’s Global Pavilion, after which students head out to a nearby 11.5-acre field to put their head knowledge into practice.

One overall goal is that each student becomes more valuable, both to their employers and to themselves, Vroom says. That value extends to not only knowing the “how” of best practices, but the “why” behind them.

Today’s drilling crews, for example, need to be aware of installation efficiencies, Vroom adds. “It’s critical, as more utilities go underground, that we start using the ground space efficiently,” he says. If crews try to avoid existing utilities by just going deep, they have to pull back more product, the install takes longer and it creates deeper potholing requirements for future work.

After each class, Vermeer is reaching out to the student, sponsoring contractor and that contractor’s local dealer. In addition to the students having a direct line to instructors, contractors and dealers are asked if they’re starting to see value. “There’s also some conditional information – such as how to handle cobble – that they don’t learn here, and that’s where their dealers come in,” Bokhoven says.

So how will Vermeer know if this training is having its intended impact? “We want contractors telling us they’re having fewer premature failures,” Bokhoven says. “We want to hear they’re getting more footage in the ground and that there’s less damage to machines. And internally, we’re tracking whether or not we get fewer last-minute requests for immediate help in running a machine.” 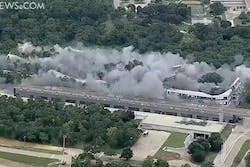 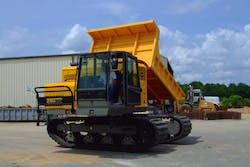 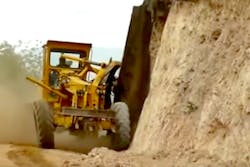 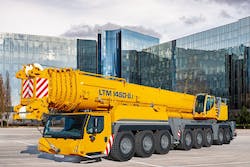