Atlas Copco’s eight-model lineup of QAS generators has undergone an overhaul to make them easier to transport, operate and maintain, the company says.

The number of mining trucks driving themselves on Caterpillar’s autonomous Command system will soon more than triple through the expansion of a deal with one of the world’s largest iron ore producers.

Cat announced today that Australia’s Fortescue Metals Group has ordered 100 mining trucks be retrofitted with the autonomous mine truck platform at its Chichester Hub along with an unspecified number of trucks at its Solomon Hub. Both operations are located in the Pilbara region of Western Australia.

Komatsu has launched a new and improved update to its D375A crawler dozer that the company says provides a big productivity boost along with lower cost of ownership.

The D375A-8 is powered by a Komatsu SAA6D170E-7 Tier 4 Final engine that delivers 609 horsepower when the machine is moving forward and 748 hp when placed in reverse.

Designed for reclamation, large construction or production mining applications, Komatsu says the D375A-8’s power boost in reverse results in faster cycle times and a productivity increase of up to 18 percent.

Over the past two years, International has introduced a new or refreshed product every 4 to 6 months, giving the Lisle, Ill.-based truck-maker the distinction of featuring the industry’s newest truck lineup.

Navistar continued its tractor reinvention with the debut of the driver-centric HV Series severe service truck. 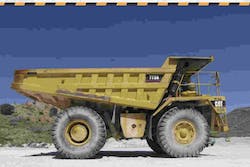 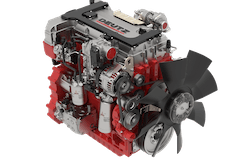 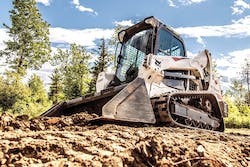