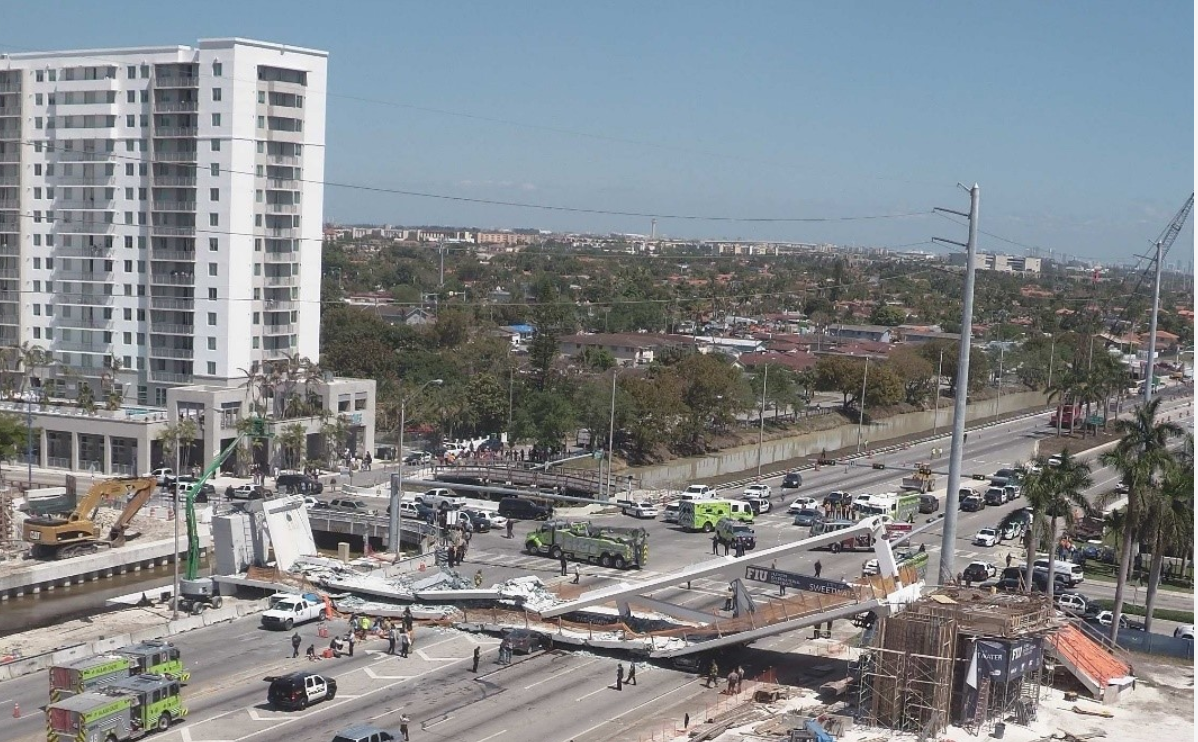 The National Transportation Safety Board continues its probe into the cause of the collapse of the Miami footbridge that killed six people, including a bridge worker, on March 15 near Florida International University.

On that Thursday, at 1:47 p.m., the partially constructed pedestrian bridge crossing SW 8th Street, an eight-lane roadway in Miami, came down with hundreds of tons of falling concrete, steel and other material, onto traffic below.

Under heavy examination is that the bridge failed after cracking was noticed for at least 19 days but nothing was done about it. In fact, the main engineer, from Figg Bridge Engineers, had dismissed safety concerns in the days and hours before the collapse.

The 174-foot-long bridge fell 18.5 feet onto SW 8th Street, a state highway. Eight occupied vehicles that were stopped below the bridge at the time of the collapse were fully or partially crushed. In addition to the bridge worker and five vehicle occupants killed, four other bridge workers and four more people on the bridge were injured.

NTSB investigators have interviewed employees affiliated with the following firms and organizations involved with the pedestrian bridge’s design, inspection, and construction:

Separately, OSHA has been investigating and has proposed fines of $86,000 in connection with the case.

NTSB investigators, for their part, have conducted various tests and examinations to evaluate multiple concrete core and steel samples taken from the bridge following the collapse.

Additionally, one of the steel post-tensioning rods from diagonal member 11 involved in the re-tensioning activity that took place on March 15 and the hydraulic jack used to tension the rods, have been evaluated.

“The initial results from these tests and examinations have, thus far, not indicated any notable material issues,” according to NTSB. Although the jack was damaged during the collapse, tests were conducted to determine whether the jack could have applied its maximum specified force.

Here are NTSB details on some of the tests completed or underway:

A tension test to failure was conducted on one of the 1 3/4-inch-diameter post-tensioning rods removed from diagonal member 11 to check the rod’s conformance to ASTM International (ASTM) A722.

The post-tensioning jack used to tension diagonal member 11 was assessed. The system consisting of the jack, hoses, hydraulic pump, and pressure gauges was installed within a self-reacting test frame with a calibrated load standard.

In this test, the jack system was actuated so that the pressure readings on four pressure gauges recovered from the collapse site could be compared to the calibrated load standard. The jack was also tested for its maximum capability.

Two concrete tension tests were conducted. Both concrete test samples were collected from the bridge deck.

These samples were extracted from the bridge structure by core drilling and were tested to determine their tensile strength, tensile elastic modulus, Poisson ratio, and tensile stress versus strain behavior.

Six additional concrete samples—three from the bridge deck and three from the canopy—were evaluated to determine the entrained and entrapped air contents, aggregate content, and cement paste content. The tests were conducted in accordance with ASTM C457.

The deadly collapse has led to speculation over a possible design flaw with the bridge, which has been a major project of Florida International University rather than a state bridge.

The collapse has also led to lawsuits by those injured and who survived those killed.