Conn. Gov. poised to stall hundreds of transportation projects due to lack of funding 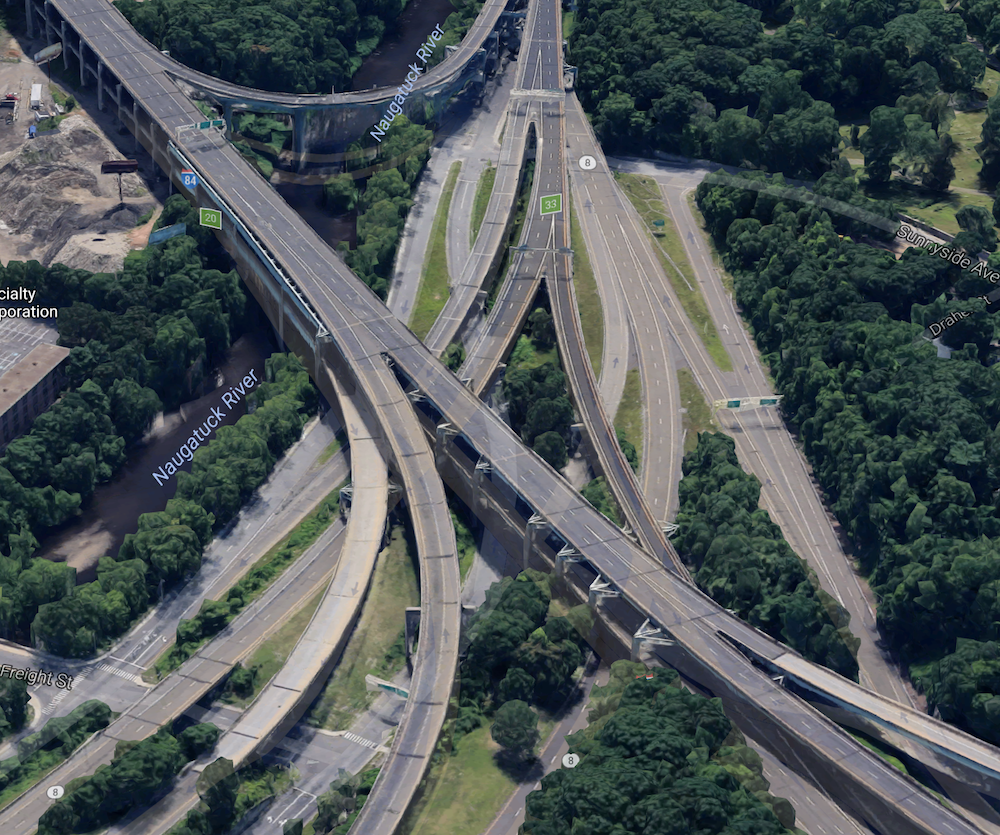 Route 8 and I-84 meet at what is called “The Mixmaster” interchange in Waterbury, Conn. Replacement of the Waterbury Mixmaster is among hundreds of transportation projects  now stalled over what the governor and DOT commissioner say is a lack of state funding.  Photo credit: Google Earth data

Hundreds of Connecticut transportation priorities could be stalled as a debate heats up over the state’s depleting transportation funding, which a new report says could fall into deficit within six months.

On January 10, Connecticut Gov. Dannel P. Malloy and Connecticut Department of Transportation (CTDOT) Commissioner James P. Redeker released a list of projects totaling $4.3 billion that they say would be postponed until new revenue is appropriated for the Special Transportation Fund.

The Governor says his administration will announce detailed proposals this month that, if adopted by the General Assembly in 2018, would bring the projects back online.

The STF finances the state’s transportation system, including the operating costs of the CTDOT and all services it provides.

Last month,  Malloy reiterated and increased his warnings on the solvency of the fund following the release of a report showing that without prompt action, the STF will be in deficit by fiscal year 2019, which begins on July 1, 2018.

Postponements indefinite – or until funding comes

The governor and Redeker say without needed funding, it’s necessary to postpone hundreds of projects set to take place in the next five years across the state, such as critical improvements to the I-91/Route 15 interchange on the Charter Oak Bridge; the replacement of the Waterbury Mixmaster; and the widening of I-95 from Bridgeport to Stamford.

The postponements are indefinite, or until resources are identified to allow projects to continue, according to the governor and DOT commissioner.

Even routine highway maintenance and transportation aid to cities and towns are seriously jeopardized, the governor stresses in a press release.

“If Connecticut does not take the necessary action to allow us to restart these vital projects, not only will it put the state’s infrastructure into a further state of disrepair, it will hurt our economy,”  Malloy says.

“If we want to compete in the 21st century economy, we need a transportation system that works for people and businesses, and we need to invest in transit-oriented development to build the communities where people and businesses want to be. I want to be very clear – this is preventable, but it requires immediate action. The legislature must act this year to avoid potentially devastating setbacks to our transportation system.”

“The cupboard is bare. Without a dedicated, stable stream of revenue to the Special Transportation Fund, our infrastructure will continue to rot and decay,” according to State Representative Tony Guerrera, co-chair of the legislature’s Transportation Committee.

“We sit at the precipice of a transportation tragedy that can be avoided by investing in roads and bridges. We must act immediately in the 2018 legislative session and institute tolls or another revenue stream to avert the oncoming crisis.”

The Governor will be releasing his recommendations to ensure the solvency of the STF in advance of the 2018 legislative session.

The head of the Connecticut Construction Industry Association, Don Shubert, explains that a major contraction in the state’s transportation program could cause hard-to-reverse damage to a construction industry already in retreat, according to the Connecticut Mirror.

“The construction industry is not geared up for fits and starts,” the newspaper quoted Shubert as saying at the governor’s Jan. 10 news conference.

Schubert adds that Connecticut already has 1,000 fewer construction jobs than it had one year ago and that employers are struggling to overcome a “skills gap” with the workers they can find.