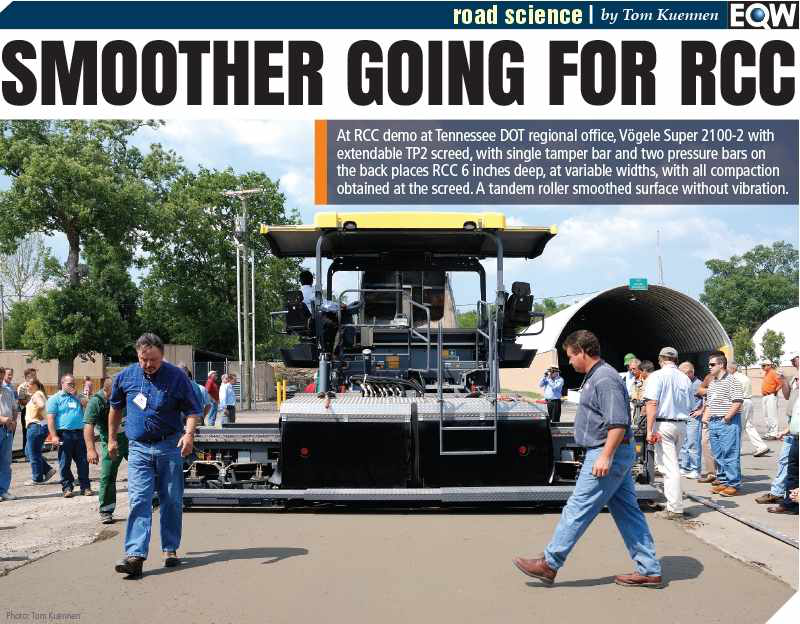 With its placement and quick-set advantages, the use of roller compacted concrete is gaining fresh energy among contractors and road agencies.

“RCC is a concrete pavement formed from a no-slump mixture, and is characterized by its unique placement methodology, which requires no forms, and no joint cutting or sealing,” says Bill Davenport, vice president-communications, American Concrete Pavement Association. “It’s quick to place and sets up very quickly. And it can be placed with high density pavers and compacting screeds – similar to the equipment used to place high-density asphalt pavement.”

“As soon as RCC is down and compacted, you can get at least some traffic on it,” says ACPA technical services engineer Eric Ferrebee. “That’s because a lot of the strength is gained from the aggregate gradation, in which it packs so well it can begin carrying loads.”

Several things have happened in the past few years to promote RCC use:

And at least two new products for RCC were being promoted in 2015: 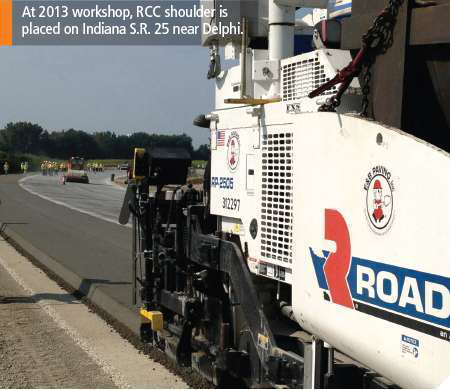 “It’s a much denser gradation,” ACPA’s Ferrebee said. “Many times the gradation is developed to achieve a maximum density. When you create that gradation, you also must consider the cement and water contents. All three tie into getting early strength and full density. Many technicians will go for a gradation on the 0.45 power curve on the sieve analysis. It will be a balance of coarse and fines; you don’t want all coarse, because coarse and fines will give you a product that’s as dense as possible.”

In this dense, no-slump mix, cement content will be in the range of conventional PCC – or 500 to 600 pounds per cubic yard – to ensure the pavement attains its strength and holds up under loads, Ferrebee said. “Strength and long-term durability comes with maximum density,” he said. “If you are achieving 98 to 100 percent of target density, you will achieve your goals of strength.” RCC will attain a compressive strength of 4,000 psi within a few days, but can be opened to traffic almost immediately.

RCC is stiff enough to compact by vibratory rollers, and does not require many of the features we associate with concrete: forms, finishing, dowels or reinforcing steel. RCC is compacted immediately after placement, in a continuous process performed until the finished pavement meets density requirements. The pavement is then cured, and in many cases, joints are sawed to control cracking.

RCC owes much of its economy to high-volume, high-speed construction methods. It can be blended in continuous-mixing pug mills at or near the construction site. These high-output pug mills have the mixing efficiency needed to evenly disperse the relatively small amount of water used. 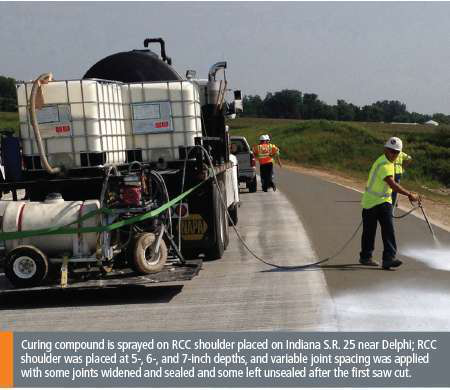 Conventional dump trucks transport the RCC and discharge it into a high-density paver, which places the material in layers up to 10-inches thick. The material will be dry enough to support a vibratory roller immediately after placement, yet wet enough to permit adequate distribution of cement paste.

Compaction is the most important stage of construction, providing density, strength, relative smoothness and surface texture. If multiple rollers are indicated, use of a paver with compacting or tamping screed – where most of the compaction will take place – can eliminate all but one roller on a project.

Curing ensures a strong and durable pavement. It also makes moisture available for hydration, the chemical process that causes concrete to harden and gain strength. A water cure sprays the pavement to keep it wet, while a spray membrane also can be used to seal moisture inside.

In an unconsolidated state, RCC is a zero-slump material. Since consolidation around reinforcing steel is not possible with such a stiff mix, RCC usually cannot be used with rebar. There is no finishing with trowels and bull floats; instead it’s finished with a roller, attaining final compaction externally with the roller instead of internal vibration with hand-held vibrators.

Subgrade conditions are important for a successful RCC placement; basically, if it’s good enough for an asphalt or concrete placement, it’s good enough for RCC. A very dry subgrade might benefit from moistening, as RCC already is a relatively dry mix, which could lose moisture out of the layer underside.

Know what you’re getting

Before its introduction to roads, RCC was used for parking areas and equipment yards for container ports, rail terminals, truck terminals, and in industrial yards where pavements are subjected to heavy equipment.

The concrete industry now wants to popularize RCC for low-volume roads, parking lots and industrial pavements. Another use is interstate shoulders, demonstrated by Georgia DOT in 2007. In 2013, Indiana placed a 3,850-foot-long trial segment of RCC as outside shoulder on Indiana SR 25, near Delphi.

One 2009 RCC job on US 78 in Aiken, South Carolina, demonstrates both the potential challenges and opportunities of using this material.

Prior to diamond grinding, the newly constructed RCC pavement had an average International Roughness Index of 200 inches per mile. Where soft subgrade was encountered, slightly wetter than optimum RCC was needed to achieve the required density. Compacting wetter RCC mixture against a weak compressible subgrade contributed to higher IRI values. Where RCC was placed and compacted against stiff subgrade, the IRI ranged from 100 to 120 inches per mile before grinding.

For typical roads with speed limits of 45 miles per hour or higher, a smooth road has will have an IRI of 85 inches per mile or less. Approximately one week after placement, a milling machine was used to remove higher surface spots of RCC. This was followed by diamond grinding to provide the final smooth surface. Penhall Company was the grinding subcontractor. After grinding, the pavement IRI was determined to be within the range of 50 to 60 inches per mile.

“RCC has a great deal of potential as an economical, rapid, and durable paving material,” said Andy Johnson, South Carolina Department of Transportation state pavement engineer. “However, it has not provided the ride and surface texture the public expects for high volume, high speed traffic. By using grinding to achieve a smooth, quiet surface, we can use RCC in a much wider variety of situations without the added cost of a hot mix asphalt surface layer.”

RCC, like any other granular material, is usually taken to the jobsite in dump trucks. At the beginning, RCC was dumped and spread with dozers and motor graders before compaction. Now European-sourced asphalt pavers and compactors are ideal for placing RCC.

The more-robust construction of the paver is one reason it works for RCC, but a more important one is the ability of a European paver to get high levels of compaction at the screed.

European asphalt pavers typically have been taller and more “boxlike” than American-style pavers, but this is changing. Still, screeds are designed to place deeper depths and wider widths, at a slower pace. There is a substantial difference in the weights, as well. An average U.S.-style paver with screed is around 45,000 pounds, versus a European-style machine with a screed, in the neighborhood of 60,000 pounds.

Also, in this country the energy in the screed is primarily vibratory, using shaft- driven integral vibrators. On a European-style high-compaction screed, there are other compaction mechanisms, such as a tamper or tampers, pressure bars and vibration. A typical 10-foot screed for a U.S.-style paver will weigh 7,000 to 8,000 pounds, where in Europe it will weigh 10,000-pounds; the tampers and eccentric shafts and other components in the European screed add to the weight.

In addition to RCC, these European-sourced pavers will place cement-treated base, crusher run aggregate, soil cement, drainable concrete and asphalt-treated base. Use of a paver for base or other heavy material placement eliminates a lot of the guesswork and repetitive action caused by conventional placement, precluding dumping, dozing, blading, rolling, repeating over and over until it’s right, and discarding the excess. A paver places this material to grade with accuracy and compaction, depending on the material.

Typical densities behind the tamping screed will generally be in the low 90s. High screed compaction reduces the roll-down and the number of machines needed on a project. Yield loss is virtually eliminated, and there are better production rates with fewer machines. RCC goes down one time, and is rolled for finishing, without the marks from dozers or multiple passes with rollers.

Densities equal to or greater than the required 98 percent of a modified Proctor test have been obtained directly out of the back of European pavers, PCA says, resulting in a working width, paving depth, transverse road profile, surface accuracy and surface texture of the highest possible quality achievable for roadway pavements.

“RCC placed with these new high-density pavers offer many technical and economic advantages,” PCA says. “It is, for example, possible to achieve high quality in terms of strength, durability, and surface finish at relatively low device and personnel costs. The fully mechanical compacting process makes it possible to walk on the surface or lay the second layer with the road paver directly after the high-power compaction screed. Depending on the desired thickness and width of the installation, the concrete can be laid very quickly, from 60 up to 120 meters (approximately 200 to 400 feet) per hour.”