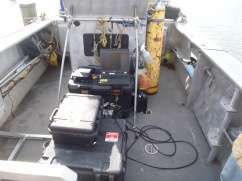 Large multiple-span signature bridges that cross major rivers require detailed inspections to ensure the safety of the motoring public is maintained. The use of high-resolution sonar imaging is becoming increasingly relied upon as a method to augment underwater bridge inspections and provide information on bridge piers.

The purpose of underwater bridge inspection, as performed by qualified divers, is to find defects or deficiencies in the substructure unit and rate the condition of the substructure unit. The inspection report findings then quantify and locate the defects for tracking in future inspections. While this is manageable for most bridges over water, for owners of signature bridges, this can be a daunting task. 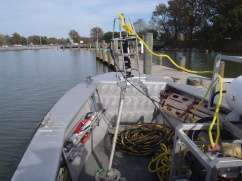 Signature bridges have numerous substructure units, often of massive size due to the bridge length and navigational clearance requirements, the depth of the waterway, the forces placed on the substructures from the superstructure (i.e. anchorage piers, bascule spans, etc.) and the forces from water and ice.

The findings and recommendations compiled in a typical biennial inspection report for a signature bridge can total several hundred pages. The effort and cost associated with performing underwater inspections on signature structures can be substantial. While typical topside inspections are logically affected by wind, weather, and vehicular and navigational traffic, in most cases, the defects are visible to inspectors, easily identified in daylight, and thus can be referenced to a known point in order to be located in future inspections.

Underwater inspections, on the other hand, are affected by current, weather, and navigational traffic, but have the added challenges of visibility and operational restrictions inherent in underwater operations, such as depth limitations, decompression time limits, and water temperature. These challenges make it more difficult to find defects and reference them to a known point for future inspections, but through new and innovative methods like scanning sonar, these challenges can be overcome. 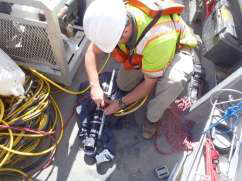 In an effort to improve the quality of underwater inspections on a signature bridge located in the Chesapeake Bay, Pennoni Associates investigated the use of high-resolution scanning sonar. Among the challenges faced during the inspections, review of previous inspection reports determined that there was a lack of consistency in the previous findings. With at least three past cycles of reports at hand, past underwater inspections findings included cracks, spalls, honeycombing and cold-joint laitance bands that are typical for concrete substructures constructed under water. There were a number of concerns among these findings. The most recent underwater inspection report from 2009 indicated that more than 25 percent (15 piers) of the Potomac-type piers were classified NBIS Condition Rating 4 “Poor.”

A review of all accumulated underwater inspection reports indicates that the reports provide inconsistent and inaccurate information about the location, extent, and status of defects and repairs. The inconsistency from year-to-year included reported new findings and existing findings being reported as “not found.” 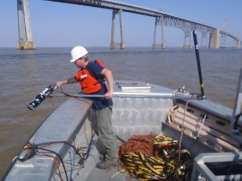 Engineer deploying sonar from side of boat

Pennoni’s underwater inspection team, led by Mark Sayger, P.E., and manned by six other engineer- divers and dive supervisors, in addition to Project Manager, Jennifer Laning, P.E., were tasked with investigating potential methods to increase the repeatability, and therefore the reliability, of these underwater inspections.

The investigation focused on a particular substructure unit known as a Potomac-type pier, which is configured in two-column and four-column configurations. Reinforced concrete columns transition through a bell shaped section into a larger diameter column base. The larger diameter column base acts as a pile cap for the piles that have been driven into the bay bottom. Concrete web walls are constructed between the columns and extend from a depth of approximately 10 feet below the water level down to the bottom of the bell. The web walls connect all the columns in both the two-column and four-column piers. Steel forms were used during construction and remain in place on the piers. These piers, in dual- and quad-configurations, are massive, with a great deal of surface area and located in the very variable waters of the Chesapeake Bay. 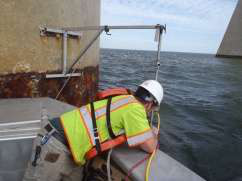 The waters of the Chesapeake Bay around the signature structure being investigated transition from a shallow depth of 19 feet to 100 feet deep near the navigation channels, with swift currents, heavy surface swells and near zero visibility underwater. Given this challenging and difficult environment, standard NBIS underwater inspections using visual and tactile methods are extremely difficult, time consuming and therefore very high in cost. Typically, the diver must maintain a stable position on portions of the pier to accurately identify, dimension, and locate defects in the pier surface while fighting swift current. Further, 16 of the piers are located in depths of 70 feet or deeper. OSHA requires a recompression chamber to be onsite for depths of 100 feet or deeper (OSHA 29 CFR 1910 Subpart T, 1910.425(b)(2)). This recompression chamber requirement is an additional cost in terms of equipment, personnel, and time; however, it is assumed that a chamber may not be necessary
for depths less than 100 feet. 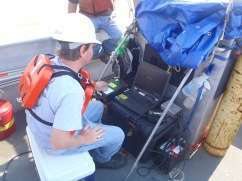 Pennoni’s overall strategy to approach these challenges was a step by step effort of investigation, evaluation of results, and refinement of results. Starting with sonar system selection, the team investigated various technologies in use to determine the state-of-the-art system available. It was determined that the Kongsberg-Mesotech 1071 with a single exposed transducer provided the highest resolution with 675 Hz.

The next task was to obtain scans to determine if sonar could be used to identify target areas on a pier face. In addition, the team needed to determine the smallest dimension the system was capable of identifying within these target areas. The initial scans were performed on a pier in relatively shallow water (approximately 20 to 30 feet), in order to simplify the scanning and manage the subsequent target verification dive in a no-time-limit depth. During the scanning, several target areas were identified, including an apparent structural reinforcement of the web, a vertical object at the base of the east face of the diaphragm at the mudline, and a dark surface anomaly on the east face of the diaphragm. 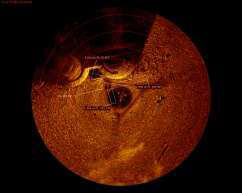 These target areas were confirmed during the verification dive, as the diver was briefed with the sonar images and then was able to enter the water with a visual of the existing conditions. The target areas were found to be a previously undocumented steel channel section with dimensions of two to four inches, a pipe protruding from the mudline approximately two inches in diameter spaced approximately 20 feet east of the east diaphragm, and a change of about two inches in the thickness of marine growth.

Conclusions from this initial effort indicated that the sonar scans could indeed identify targets of interest, these targets were confirmed by diving, and the sonar was able to determine targets as small as two inches on the pier face. 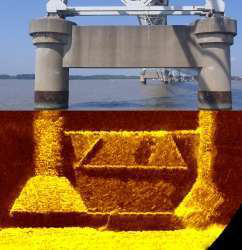 During the scanning process in this relatively shallow depth with fairly calm sea conditions, the sonar readings and images were affected by wave motion as the transducer was suspended from the bow of the boat. Typically, the wave motion is translated into the sonar image and requires the sonar operator to rescan several times until satisfactory images are obtained. This led Pennoni to consider ways of improving the sonar image in future scanning efforts, as higher seas were more probable during operations at piers in deeper water and less-sheltered areas.

Since the sonar head in a boat-deployed scheme is subject to motion within six degrees of freedom, higher degrees of error were introduced into the image development. As one of the goals of the investigation was to establish methods of repeatability, it was important to consider ways to eliminate this systematic source of error. 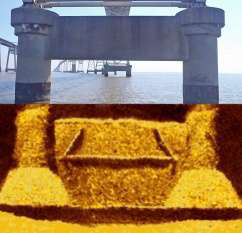 Deployment directly from the boat had already been seen to be susceptible to wave motion and thus was dependent on weather conditions.

The tripod mount was attempted and found to be high risk, given the swift currents and depths. In consideration of this, an alternative deployment method was developed that consisted of mounting the sonar head to the pier by way of an aluminum frame. This frame was designed specifically for the Potomac-type piers and included permanently mounted attachment brackets. The frames were designed to also be mounted by a strap and tightened with a come-along device. 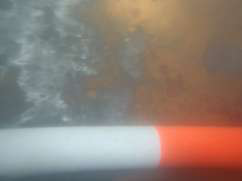 Underwater view of an anomaly found from sonar image

After successfully obtaining sonar images and confirming the identified targets for the shallow pier, additional piers at varying other depths (21 feet, 45 to 60 feet, 57 to 61 feet, and 76 to 78 feet) were scanned using the pier frame to support the sonar head.

While weather conditions during the scanning time frame did not allow diving operations to verify the scans, in each case, the scans revealed previously undocumented structural details. Further, numerous areas of interest were visible on the pier surfaces. It was concluded that these images could certainly be used to prioritize a diver’s efforts and optimize the results and repeatability of the underwater inspection findings.

Further efforts were concentrated on two piers, with the intent of clarifying both positive and negative targets. Once they were identified, divers were deployed to verify that the positive targets on the sonar image indicated the presence of actual defects or areas of deterioration and that the negative targets indicated the lack of defects or deterioration. For one of these piers, the sonar image targets and the dive results were compared with the findings in the most recent underwater inspection report, demonstrating inconsistency in the report findings. 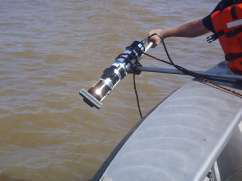 Close-up of engineer deploying sonar from side of boat

Ultimately, Pennoni’s study concluded that the sonar imaging was able to successfully direct the divers to areas of interest on the piers. This supports improved documentation and more repeatable inspection results, as the images can be repeated from inspection to inspection. The divers can use the sonar image prior to diving to evaluate and identify areas of interest on the pier face. Use of the sonar image can eliminate the need for the diver to have to locate the target to a known point of reference, which can be a difficult task in little or no visibility, strong current and on massive piers.

Use of sonar imaging can also improve the knowledge of a pier in general, as Pennoni found that the images identified the presence of underwater pier elements either not located or incorrectly located on existing plans and drawings. Ultimately, the use of sonar imaging cannot replace NBIS-required underwater inspections, but when managing the inspection of massive piers for signature structures in challenging environments, this can serve as an additional tool in the bridge manager’s toolbox, increasing reliability and repeatability of inspection findings.

About the author: Jennifer Laning, P.E., serves as the Bridge Inspection Practice leader at Pennoni Associates. Laning has 20 years of experience specializing in bridge and underwater inspection and management of complex bridge inspection projects. She is responsible for project and quality management for Pennoni’s bridge and underwater inspection agreements with local, state, and federal agencies across the Mid-Atlantic region and the United States. She can be reached at 443-449-2503 or at jlaning@pennoni.com.