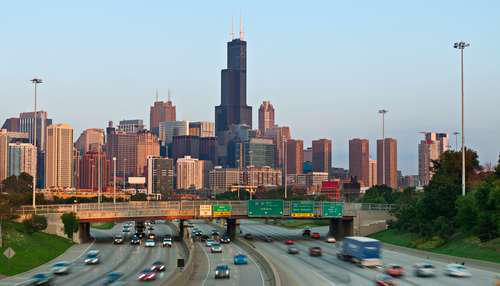 Chicago has the 10th worst traffic in the nation, and it’s predicted to come in 8th place during the Labor Day weekend

Sweet Home Chicago! Although my adopted hometown (I’m originally from Cleveland) is a fabulous city of music, theater, museums, food (my favorite part of it), sports teams and endless other activities, it’s also known for its road congestion.

Those from the area or frequent visitors to the Windy City can commiserate with me about lengthy jaunts on The Eisenhower, The Stevenson, The Dan Ryan, and The Kennedy. It looks like we’ll be getting to spend quite a bit more time on these highways this weekend.

Every Labor Day, millions of Americans hit the road for one “last” summer weekend, and 2012 will be no different according to traffic information provider INRIX.

Through in-depth analysis of recent traffic patterns in the metro area, INRIX predicts that Chicago, ranked as the tenth-most congested city in the U.S., (as determined by the 2011 INRIX Traffic Scorecard, released May 2012) will claim the No. 8 spot for the worst cities for weekend road-trippers.

“Although there’s plenty to do in Chicago this weekend, recent trends and increases in consumer spending indicate that travelers will be a little less afraid to spend money on gas and hotels, so we’re predicting some delays as travelers drive to the airport or out of town for Labor Day,” Jim Bak, INRIX director of community relations, said in a press release. “Traffic Friday will look like a longer version of a normal Friday rush hour, meaning conditions will be unpleasant well into the evening.  Travelers thinking they’ll avoid extra traffic by waiting for Saturday to depart will have better luck as long as they’re on the road before lunchtime, as traffic will pick up around 2 p.m. and peak between 3 p.m. and 4 p.m.”

Key insights from INRIX’s Chicago area research include the following:

Although traffic patterns on Friday, the big holiday getaway day, will start off like normal rush hour conditions, effects of extra drivers on the road will extend the congested period, with rush hour lasting till at least 8:30 p.m. CT, according to INRIX.

Additional information about traffic delays heading to popular road trip destinations for Chicago residents is as follows, according to INRIX:

Around 6 p.m. CT traffic heading for Chicago Airport will face 19 miles of bumper-to-bumper congestion and average speeds of just 16 mph on the westbound I-90. INRIX advises drivers bound for the airport to allow approximately 90 minutes for their journey. Low speeds then continue to Sleepy Hollow, which will affect drivers heading to Wisconsin, where traffic breaks off and starts to return to free flow speeds.

Saturday appears to be much lighter, indicating that most getaway journeys will have already been made.

Following the severe congestion after Chicago Airport, traffic taking the westbound I-90 will run at healthy speeds until Madison, where speeds slow to 25mph past the Dane County Airport.

Chicago to Portage, IN (Cross roads to Indiana and Michigan Dunes State Parks)