Timely blueprint will direct research into pavement management and preservation 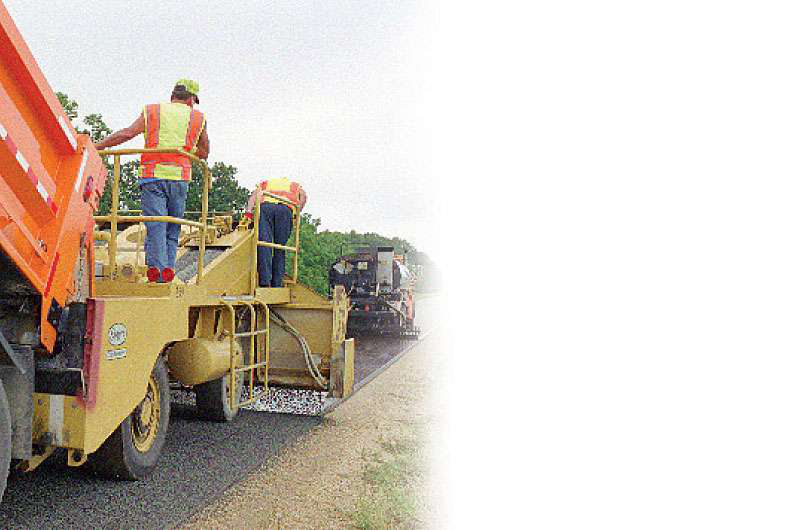 The Pavement Management Roadmap (FHWA-HIF-11-011) was articulated in 2011 by the Federal Highway Administration (FHWA) and helps identify the steps needed to address current gaps in pavement management – thus preservation – and to establish research and development initiatives and priorities.

Pavement preservation is a network-level, long-term strategy that enhances performance and extends pavement life by using a variety of cost-effective surface treatments, and its successful application is intertwined with effective pavement management.

For states fleeing to pavement preservation, the issue is money. As cash streams dwindle, state DOTs are compelled to use available funds to preserve their existing road network with a goal of improving their pavement condition indices (PCIs).Take these examples:

• Missouri DOT has put citizens on notice that it will spend money to preserve the existing system, and that the days of major capacity rebuilds – like the massive New I-64 total expressway rebuild in St. Louis, where reconstruction resulted in the complete closure of portions of the expressway in 2008 and 2009 – are over.

In its five-year plan of June 2011, the Missouri Highways and Transportation Commission chose to reduce the size of DOT staff by 1,200, close 131 facilities and dispose of more than 740 pieces of equipment. 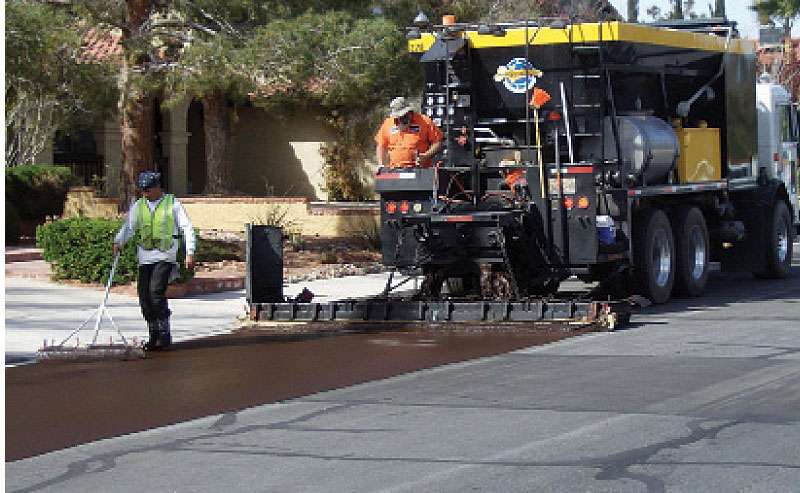 “By 2015, the proposed direction will save $512 million for vital transportation improvements,” the plan’s executive summary states. “As of Sept. 30, we had eliminated 667 staff positions, closed 23 facilities and disposed of 245 pieces of equipment. Those moves have allowed us to save $177 million since March of 2010 when the initial plan was put into action. More than $64 million of that money has been used to improve the state’s rural roads.”

“We are committed to keeping our roads and bridges in good condition for as long as we can with the resources we have, keeping our citizens safe, and delivering outstanding customer service,” Nichols said in St. Louis. He added that, in January 2012, MoDOT was going to seek legislative authority to create a public-private partnership with a goal of rebuilding I-70 from St. Charles to Kansas City as a toll highway, as tolls were the only way the project could be paid for given current funding levels.

• Wyoming DOT in November announced a strategy of preserving the state’s highways and bridges during the state’s current transportation funding crisis. 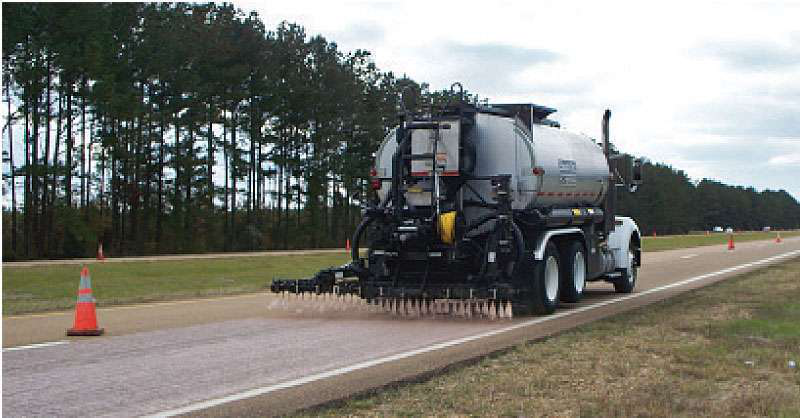 Asphalt rejuvenator is placed on U.S. 25 near Jackson, Miss., using a BearCat 2,000-gallon distributor on an abraded surface.

“In anticipation of major funding decreases, WYDOT is making sweeping changes,” says director John Cox. “WYDOT has shifted its focus away from the kind of reconstruction and improvement projects we’ve been doing for the past four decades into more of a survival mode.”

In a video released by the American Association of State Highway & Transportation Officials (AASHTO), Cox says changing the department’s focus to preservation will make the decline in the condition of the state’s highways more gradual. “Our primary goal is to preserve the existing highway system as long as possible,” Cox says. “What that does is it kind of staves off the inevitable, because sooner or later we’re going to have to take care of the system by getting underneath the pavement and reconstructing pavements.”

However, this approach will also result in fewer safety improvements to highways and a smaller number of projects designed to accommodate increasing traffic volumes, he says.

New ‘Roadmap’ points path to improved pavement management and preservation in the decade to come.

In the video, Wray explores Ohio’s strategy for preserving its highways and bridges during the current transportation funding crisis “There’s a limited amount of resources for an unlimited amount of wants, desires and needs,” Wray says. “We have to focus on the basics: What improves safety, the economy, and the quality of life for the people of Ohio.”

ODOT is working to be leaner, more efficient, and more effective. “We have a responsibility to all Ohioans to get the best value and highest rate-of-return for every dollar we spend,” Wray says. Like Missouri, that also will include public-private partnerships, which due to a change in Ohio law are now allowed.

New ‘Roadmap’ is a Guide

The roadmap is authored by Kathryn A. Zimmerman, Linda M. Pierce and James Krstulovich of Applied Pavement Technology, and helps identify the steps needed to address current gaps in pavement management, and to establish research and development initiatives and priorities.

“Unfortunately, decreases in the purchasing power of available funding, coupled with reduced funding levels, have led to deteriorating network conditions within most transportation agencies at the same time that demand for these facilities is increasing,” the introduction states. “As a result, many transportation agencies are shifting their priorities from a focus on system expansion to an increasing focus on system preservation. In fact, a number of agencies have recognized the cost-effectiveness associated with the use of preventive maintenance treatments to slow the rate of deterioration and to postpone the need for the most costly rehabilitation strategies.”

Pavement preservation is changing how road agencies work, the introduction says, and this is reflected in the examples of Missouri, Wyoming and Ohio above. “[T]he shift towards pavement preservation has not been entirely free from problems,” the introduction says. “For example, organizations that had previously separated the maintenance and capital improvement decision processes have had to overcome these institutional barriers in order to develop effective improvement programs that include preventive maintenance treatments.

In addition to the more traditional roles it serves, pavement management can provide a link to maintenance and operations through the analysis of pavement preservation options. And it can provide the pavement performance data required to evaluate and calibrate the mechanistic-based performance models for use within a specific transportation agency.

The roadmap attempts to clarify what the next 10 years will mean for agency pavement investments in its Vision for Pavement Management in 2020.

“Pavement management will make use of a new generation of technology so agencies are less dependent on manual labor for data collection,” the vision statement says. “Pavement management tools will allow agencies to communicate effectively with stakeholders, using clear statements that are tied to agency goals and pavement worth.

Asset management goes hand-in-hand with pavement management and pavement preservation. It provides a coordinated approach to managing infrastructure assets over the course of their entire life cycle, thus improving performance, increasing safety and providing greater value to the community.

With an asset management approach, optimal decisions on what would be the most effective mix of preserving, maintaining, renewing or replacing infrastructure components are based on accurate data, economic analysis and sound engineering.

Decisions are also supported by performance measures and performance-based goals. “The availability of quality data has had a tremendous impact on an agency’s ability to compare different investment options and to make sound business decisions that consider both engineering and economic factors,” says Nastaran Saadatmand of FHWA’s Office of Asset Management.

• Use of Existing Tools and Technologies;

• The Broad Role of Pavement Management; and

The long-term needs include ones that will require research to improve existing practices. Priority long-term needs include defining and calculating the effect of pavement preservation treatments on pavement life, defining the impact of pavement management investment levels on benefits, using pavement management data to support design activities, developing performance models that consider a series of pavement preservation treatments, and developing a method for effective modeling of structural condition.

The roadmap also looks at the steps required to make these identified priorities a reality, noting that “the successful implementation of the roadmap demands a focused, cooperative approach among national and international organizations,” the document says.

A new guide to bridge preservation also was released in 2011 and is available for download.

Bridge preservation is defined as actions or strategies that prevent, delay or reduce deterioration of bridges or bridge elements, restore the function of existing bridges, keep bridges in good condition and extend their life, according to the guide.

Like pavement preservation, effective bridge preservation actions are intended to delay the need for costly reconstruction or replacement actions by applying preservation strategies and actions on bridges while they are still in good or fair condition and before the onset of serious deterioration. Bridge preservation encompasses preventive maintenance and rehabilitation activities.

• employs long-term strategies and practices at the network level to preserve the condition of bridges to extend their useful life;

• has sustained and adequate resources and funding sources; and

In addition to the Bridge Preservation Guide, new guidance is now available for the preservation of high-volume roadways.

Even as road agencies have turned to pavement preservation to extend the life and improve the condition of their roadway networks, the use of many strategies has been restricted to lower-volume roadways, with little use on high-volume roads. To remedy this, a new report has been issued by the Second Strategic Highway Research Program (SHRP2), Guidelines for the Preservation of High-Traffic-Volume Roadways.

The guidance provides information to help expand agencies’ ability to use varied treatments to best meet the preservation needs on higher-volume roadways. As the guidelines note, “most preservation treatments will have the same beneficial effects on a pavement regardless of traffic volumes.”

Barriers historically inhibiting the greater use of preservation treatments on high-traffic-volume roadways have included increased performance expectations, increased risk of failure associated with the durability of treatments under higher traffic volumes, and lack of agency experience with certain treatments.

A sequential approach for evaluating possible preservation treatments for an existing pavement and identifying the preferred one is presented in the guidelines, diagramming how data sources and project constraints are considered.

Also presented is information on pavement distresses and how the various preservation treatments can address them. The treatments are described in initial feasibility matrices that outline possible applications for specific distresses and the treatments’ ability to prevent or slow pavement deterioration or to restore functionality or surface characteristics.

The national conference theme, Road Trip: Driving the Message for Change, promotes the idea that spending money to keep good roads in good condition is a cost-effective way to save America’s highways. Communicating the importance of preserving our highway investment will be an important conference objective.

The Renaissance Nashville Hotel is the venue for 2012, and is located in the heart of downtown near popular attractions. Building on the success of the First International Conference on Pavement Preservation in April 2010 in Newport Beach, Calif., this conference incorporates the first combined meetings of the Midwestern, Northeast, Rocky Mountain West and Southeast Pavement Preservation Partnerships, to examine advancements in current practice and new treatment technologies that offer improved reliability and enhanced performance.