In bridges, there’s American old and then there’s old. 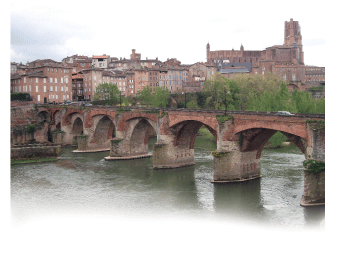 The Pont Vieux and the Cathedral de Sainte Cecile.

The Pont Vieux (literally “old bridge”) had been in use for 657 years when the oldest surviving roadway bridge in America, the 73-foot Frankford Avenue Bridge in Pennsylvania, was constructed in 1697.

The 500-foot long Pont Vieux in Albi, in the Midi Pyrenees region of southwest France, is still carrying its fair share of traffic over the River Tarn nearly a millennium after it was built in 1040.

According to the Federal Highway Administration, America’s 607,380 bridges are an average of 42 years old, and the American Society of Civil Engineers revealed in its 2013 Report Card that 30 percent of them have outlived their 50-year design life.

The original Pont Vieux was an eight-arch crossing ordered by Viscount Trencavel and officials of neighboring religious dioceses in 1035. As well as further encouraging trade, the construction of the bridge prompted the development of the right bank of the river in the historic episcopal city, which sits in a naturally defensive position on a bend in the Tarn, and has been inhabited since prehistoric times.

No doubt it made the Viscount plenty of capital, too, as it started life as a toll bridge that boasted a fortified gate tower, drawbridge and a “ravelin” – a defensive structure that served to split any attacking force.

It was originally too narrow for carts to cross, and goods had to be carried either by hand or on the backs of animals.

But, as traffic grew, the bridge was redeveloped and widened in the 13th and 14th centuries to allow carts to cross.

For three centuries, the Pont Vieux was even called home by many Albigensian families, who lived in houses built on top of the piles – until these properties had to be demolished following a devastating flood in 1766.

Originally built in stone, and with a sandstone core, the bridge was clad in brick and the road section widened again in 1820 to cope with the rapidly rising levels of traffic of the Industrial Revolution in Europe.

This 19th-century cladding meant the old stone bridge finally looked like it belonged to the brick-faced city it had faithfully served for centuries.

Ownership of the construction had passed from the viscounts of old to the city’s bishops – but, unable to bear the rising cost of maintenance, they “gifted” the bridge to the city. Since then, the structure of the bridge has remained relatively untouched.

By the time it entered public ownership, the Pont Vieux had been the only dry way to cross the Tarn for 800 years – but it would be nearly another half a century before a second, almost equally impressive, river crossing was built to take some of the mounting pressure off this old man of the river.

This bridge – called the Pont Neuf (new bridge) – brought the railway to Albi. A third bridge, for road traffic, completed the Albigensian set in the 20th century, although there is now talk of a fourth crossing.

The Pont Vieux was declared a French historic monument in 1921.